Drew drawn to the world map

Celebrity globe-trotter Drew Binsky, who was in Kochi recently, has visited 153 countries. 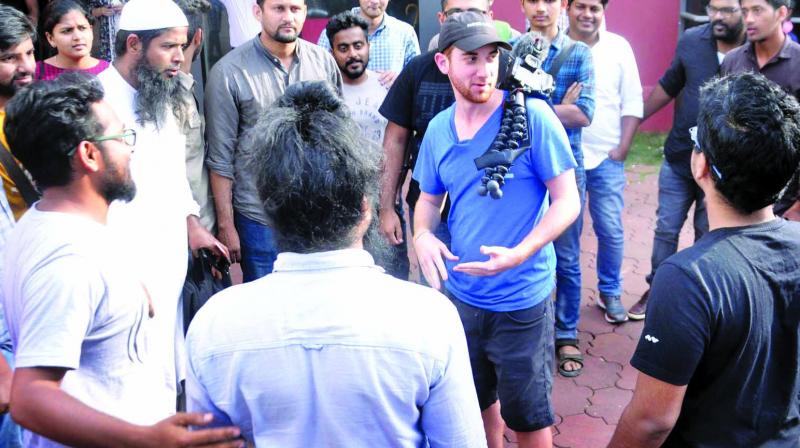 It is Drew Binsky’s second visit to India. His first arrival was four years ago, on a three-month solo trip to the Northern region. “That was on a shoestring budget, and I had my ups and downs during the journey. I had no camera back then,” says the 27-year-old Drew, who has so far travelled to 153 countries. His goal is to visit all the countries in the world before turning 30. This year, his mission is to cover 90 per cent of the earth. “I will be travelling mostly to African, Latin American and Middle East countries this year,” he says.

Currently on a 10-day-long trip covering South Indian states, Drew, who travels with his girlfriend Diana and cameraman Michael Hayter, says, “Most of the time we (Diana and Drew) travel together. Michael joined us two months ago.”

A native of Arizona, a south-western US state, Drew has been globetrotting for the past six years. It didn’t happen overnight. The travel bug hit him while pursuing his studies in Prague. Living in Europe and visiting more than 20 countries helped him realise that travel is where his heart is. After earning a degree in economics, he moved to South Korea to become an English teacher! He found the teaching offer an opportunity to explore places. “I didn’t want to chase the American dream of doing a corporate job,” says Drew, during an interaction with his followers in Kochi.

He started his first travel blog The Hungry Partier during his stay in South Korea. Later, he rebranded the blog as ‘Drew Binsky’. Right now, he has 500M+ video views, 2.2 M+ social media followers to his credit. Drew says he discovered Snapchat during his solo trip to India. “I used to share my travel stories there. Then, I moved to Instagram.”

It was his girlfriend who initiated him to the world of videos. “I met Diana in Bangkok three and a half years ago. We started dating and in 2017, she bought me a camera. She asked me to make videos on YouTube. I was not quite convinced because I was already using Snapchat and Instagram and was comfortable with that. She told me that video is the best way to attract people these days. People are more into videos and not blog posts, which is true,” says Drew, who wants people to get out of their comfort zones. “If you live in a bubble, you will never know the world outside. Travel has changed my perspectives about the world. I want others to experience the same. I want my videos to inspire others to travel across the globe. I tell stories through my videos. When you make a video, make sure that it has a beginning, middle and end. There should be something for the viewers to take away. Find a theme of your interest and create stories based on that. Don’t worry if no one watches your video in the beginning. Keep practising. Patience and hardwork are very important. The more you do, better you will become,” he says.

Journeys have never been easy; there were good and bad times. At some places where natives don’t speak English, he had to depend upon sign language to communicate. But Drew is not ashamed of it. “Our ancestors have used the sign language, then why not us,” he asks.

In fact, Drew believes in taking chances. His advice to aspiring travelers is to follow their heart. “When I decided to visit North Korea, everyone discouraged me saying that it is a dangerous place. But, when I went there, it was a different experience. I found it a beautiful place. So, don’t listen to others. Just go,” he says and adds, “Only organised tours are available in North Korea. Also, you will have to go to Beijing to catch the flight to North Korea. No other route is available.”

Ask him about India and Kochi, he says, “So far, it has been nice. People are curious here. They are not shy. They approach you on streets and take photographs. Kochi is very green. And, it is cleaner compared to other big cities,” concludes Drew, who will be heading to Tamil Nadu soon.