Cool as a parent

The parent-child dynamic is a complicated one to begin with, but introducing an element of acceptance might make it smoother. 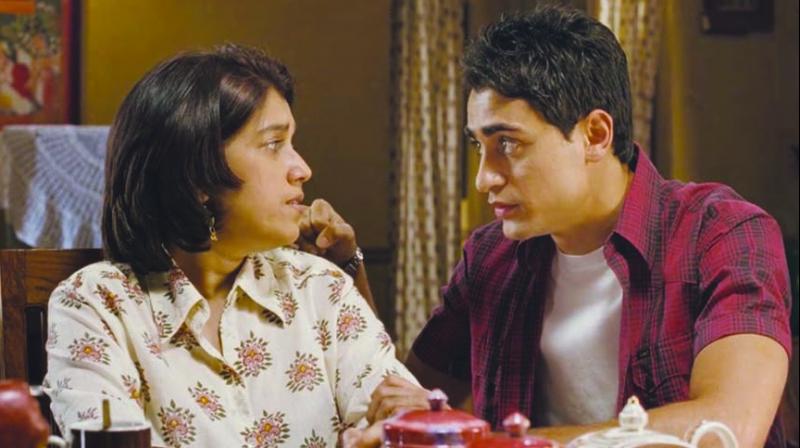 In Jaane Tu... Ya Jaane Na, Imran Khan often opens up to his on-screen mother, Ratna Pathak Shah, about his love life and other issues.

The birds and the bees have always been a matter of hush-hush in Indian households — that is, if ‘the talk’ happened in the first place. An open, trusted dialogue about romance and sex takes the backseat in a culture that often deems it insignificant. That being said, in the past decade, there has been a gradual movement toward a culture that encourages both the parents and the child to open up, share and understand each other at a deeper level.

Imagine this: a teenager comes home in tears, but instead of storming to her room, she opens up about her heartbreak to her mother. While this unreels as an unusual scenario, more and more Indian families are taking baby steps to imbibe the uncomfortable parts of a conversation into their relationships. In fact, for many children, parents have been in the loop since the very beginning. 20-year-old Simran Muchhala remembers always telling her parents about her crushes and boyfriends. “My parents have known about these things since the very beginning,” she says. “And it makes me feel closer to them.”

The parent-child dynamic is a complicated one to begin with, but introducing an element of acceptance might make it smoother. “I don’t go out of my way to speak about my romantic relationships with my parents,” shares Delhi-based 24-year-old Jaideep Misra, “it’s accepted as a part of our relationship. My parents, too, appreciate the honestly and like to know more about my life.”

Ranging anywhere from telling your parents about a crush to opening up about the deep-seated problems of your romantic relationship, this trend comes with the familiar hints of Western influence. However, it goes beyond that.

Shaira Kohli, a special educator at a school, points out that while the shift in values is in synchrony with Western trends, it comes from a closer source. “This awakening is also inherent. Centuries ago, India was a more developed country than any other. The 21st-century presents another paradigm shift — a recent trend that sways toward parents wanting to be their children’s ‘friend.’

This friendship goes on to bring parents closer to their children and, additionally, build a foundation for other emotional relationships. “The closeness seeps into other areas of my life as well. Emotionally, you’re in touch with your family, as well as yourself,” Jaideep says. Simran agrees with the notion, “Being open and honest with my parents has made me less self-conscious. It’s easier for me to open up to my friends and express myself well,” she shares.

A forgotten aspect of this relationship is the fact that it’s a two-way street. An open channel of communication goes both ways and helps the parents, too, open up to their children. “Once you start talking to your parents, you also get to know them better. They’re also dealing with this situation for the first time — it takes a bit of understanding on our side as well.” Jaideep explains.

Vini, a mother-of-two, notes that being accepting of her children’s romantic and sexual lives has not only made them closer, but brought about an element of trust and respect in their relationship. “I’ve always been their emotional support,” she says. “And I feel comfortable telling them my problems, too.”

“The change is good as long as it’s regulated and the parent is constantly educating the child on the same,” says Shaira. It is important to know where to draw the line. “While being open is important, a parent is a parent and certain rules and regulations must be inculcated in the child. It is important for the child to have two distinct parental figures for ideal development,” she says, summing up.