Not Just Clowning Around

Clowns from around the world have come together to create India’s first clowning festival and spread smiles all around. 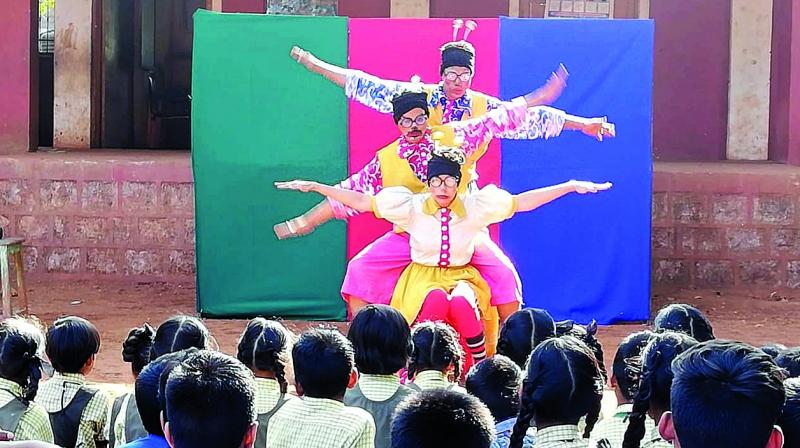 Clowns performing at a school for children

Shakespeare’s jesters used their wit, humour, and clownish demeanour to poke fun at powerful people in the king’s court. Though considered ‘fools’, they had an important role to play. Even today, clowns are more than just funny-looking people dressed in oversized clothes, for they perform the selfless job of infusing humour and mirth into peoples lives. Their antics provoke a good laugh and help us let off steam.

Taking this preoccupation further, the Sweden-based company, Clowns Without Borders and city-based Red Nose Entertainment have joined hands to create Laughter Per Kilometre, an International Clown Festival that will bring together the quirkiest clowns in the business. The objective of the festival, according to the organisers, is to use this art form as a tool to provide psychosocial aid to those in need of it. “In simple words, help children and the people of India release emotional and physical stress through laughter,” says Rupesh Tillu, who is a clown and also the director of one of the stories that will be performed at the festival.

According to Rupesh, the festival will feature a range of activities, beginning with a clowns residency, also called ‘fools’ school’, where 15 clowns from Mumbai, Pune, Kolkata, Delhi and Chennai and five directors from Sweden, Germany, and France came together to hone skills, discuss their craft and prepare performances for the upcoming festival. Next, performances created during the residency will be taken to underprivileged children all over the city with the help of NGOs. These performances will also take place in other cities of India, followed by talks and seminars about clowning in theatre. “Our goal is to spread laughter in India and relieve the suffering of people, especially children who live in areas of crisis,” he informs.

However, these clowns aren’t just bumbling figures who slip on banana skins in an exaggerated display of slapstick comedy to entertain children. These clowns are trained theatre actors who have well-thought storylines that are designed to take even adult audiences on an emotional ride. “We use intellectual ideas in a simplified way, which makes the objective of a character very clear. Adult audiences too are naïve and that’s why you see them falling for the character,” says Camilla Persson, a senior clown theatre director from Sweden. For Camilla, a great clown is one who can make the audience laugh and cry. And that is why her 25-minute story with Delhi-based artists centres around an upper-class female violinist’s relationship with her maids. “It’s about friendships and relationships in the urban context,” she informs.

Through her over a decade-long journey in clowning, Camilla has observed a lot of change in the way clowns are viewed and is expecting great acceptance in India. Though she hasn’t met the Indian audience, she believes that it is a country that appreciates storytelling and has good, educated actors, and says, “there is a huge scope for theatre clowning, this is what I like about India.” Rupesh adds to Camilla’s observation saying that theatre clowning is new in India as clowns are only associated with the circus. So they will be introducing them to India for the first time. “There is a basic storyline and the goal is to give the audience an emotional experience, be it humour or sadness,” he says.  When asked if there are any apprehensions regarding the audiences’ reaction, Rupesh says that he is confident that the festival will become a huge success as everyone is in search of happiness. “The audience is going to surrender, because the more stressful our lives, the more clowns we need,” says Rupesh.

Rupesh’s story revives the great Indian playwright Kalidasa’s story, Shakuntala. “We have adapted theatre clowning from the West, but I want to find stories in narratives I can relate to,” explains the director. The clowns have been trained as per the techniques of Italy’s most revered comedy style, Commedia dell’ arte. “The first day was surprising, the process is completely based on improvisation but through some exercises, we found the story structure and plot,” says Bhaskar Jha, an actor who is a part of Camilla’s story. Adding that as an actor this has been his most playful experience, he says,  “I have learnt that clowns should not only entertain the audience, but also carry forward the storyline.” Interrupting Bhaskar, Rupesh concludes by saying, “A good clown will always be a great actor, but a great actor cannot necessarily be a good clown.”