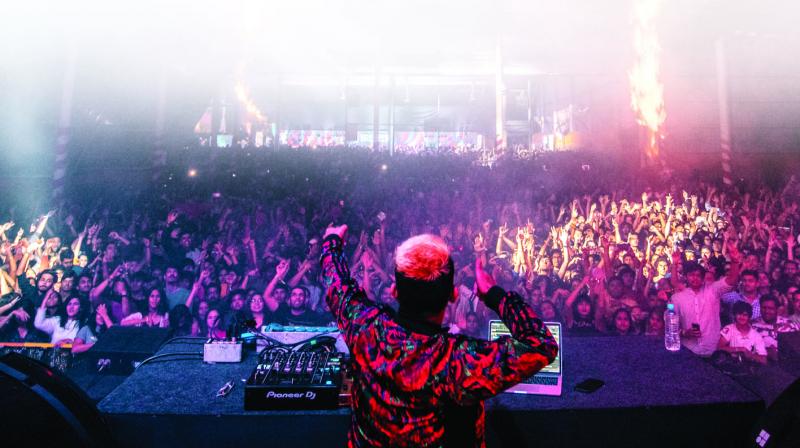 Currently, the multi-talented musician is basking in the glory of having recently finished the first leg of his maiden music festival, Yuv Fest, in Pune.

The best part about discussing art with an artist is getting to witness the glimmer in their eyes and the unwavering passion in their voice — the mark of a sincere artist in love with their craft. Thankfully, when we sit down to interact with the 23-year old Ritviz, the air is crackling with musical ambitions and aspirations. “My musical journey started very early on. Indian classical music was present in my house as my mother is a classical singer and my father plays the tabla. So, ever since I was a kid, I would wake up to my mom’s alaap. I grew up listening to it,” reveals the musician.

This strong musical influence led him to start taking lessons in Hindustani classical music. But then, how does he go around belting out tracks like Udd Gaye and Sage, which are heavily electronic in nature? His teenage years are to be thanked for that. “In my teenage years, I started listening to English music channels like VH1 (top 40 and stuff). That’s when I listened to a lot of Linkin Park and Limp Bizkit. I also got heavily into a lot of hip-hop artists like Jay-Z. That really helped me find my creative calling in Western culture. I also fell in love with electronic music a few years down the line,” he elaborates.

So, it was only natural that when he started producing his own music in 2013, a cocktail of all his influences — from Hindustani to hip-hop — would be the result. “I wanted to create songs that had roots in Indian music. Songs that my country’s audience would relate to but the format had to be electronic,” he says. The funky and upbeat bass-heavy tracks tuned to mellow vocals have now become somewhat of a Ritviz signature. If he had to name his style of music, he would call it “New-age Hindustani,” he chuckles.

But when given a choice, does Ritviz prefer being a producer or a singer? He responds, “I was trained as a vocalist and growing up I was constantly producing my own music. So, now I’m just making music. I am like a music director for myself. I tell myself to add beats, to sing, to do this and that. It’s all me.”

And even though music means everything to the musician, it is not his only creative outlet. “Growing up, I did three things mainly. I would paint, write stories, and make music. I never saw myself becoming a musician or a painter or a writer, but wanted to do all three things,” he reveals. While his writing career continues in a way, as he writes much of his own lyrics, don’t be surprised if you see artworks and novels by Ritviz being released someday. His dreams know no bounds.

Currently, the multi-talented musician is basking in the glory of having recently finished the first leg of his maiden music festival, Yuv Fest, in Pune. The tour will also see the light of cities like Delhi, Bengaluru, Hyderabad, and Kolkata. “This was hands-down a dream come true. Having my very own show with Bacardi on board. Having all the acts I love on stage and my parents in the crowd with all my supporters, it’s incomparable to anything else,” he beams. The unique fest offers a mix of comedy and music.

The one challenge that the musician feels hanging over his head is the fear of being put in a box, so Ritviz believes that versatility is what his upcoming works should bring about. While the musician is all excited to release his first full-length album since his last EP, he is soon set to open for Katy Perry and Dua Lipa’s concert in Mumbai this month. “I grew up listening to Katy Perry. So, this opportunity is overwhelming,” he exclaims. And what about the future of the contemporary music scene in India? “With so much space to experiment and find one’s own sound, it’s exciting,” he predicts.