Made using a shipping container, this Cuff Parade family’s vacation home is unique in its shape and size. 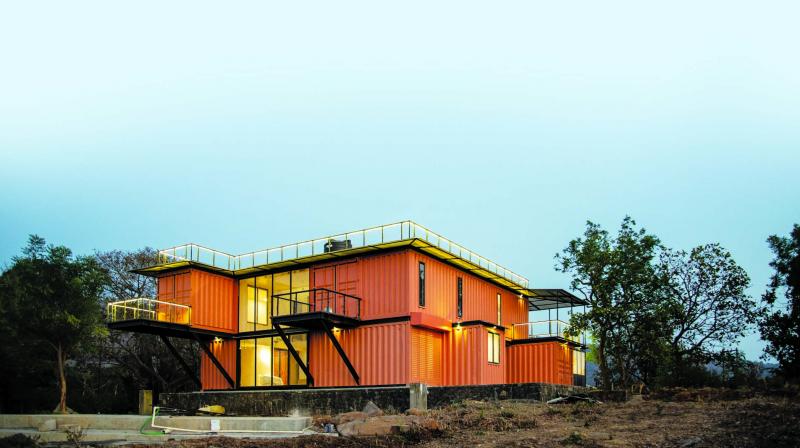 Taking the metaphor 'think-out-of-the-box' quite literally, Pardiwala brothers — Mishal and Mikhail — have turned their barren land in Zirad into a sustainable and affordable living quarter.

Taking the metaphor 'think-out-of-the-box' quite literally, Pardiwala brothers — Mishal and Mikhail — have turned their barren land in Zirad into a sustainable and affordable living quarter. Nestled on top of a little hill, the family has converted the 8ft width 40 ft in length steel shipping containers into their holiday home.

“Zirad is a small village in between Mandwa and Alibaug. If you look at the land, it is on the edge of a very visible high point, and we had the land lying for many years just growing vegetables. It was a good time to do something with the land. So we all sat together and decided on how to go about it,” says Mishal, who co-owns sustainable brand TreeWear with his younger brother Mikhail.

Named the Orange Box the property is spread over one acre of land. Comprising six containers — making for three bedrooms, one living room, and a kitchen — each room as a balcony of their own. 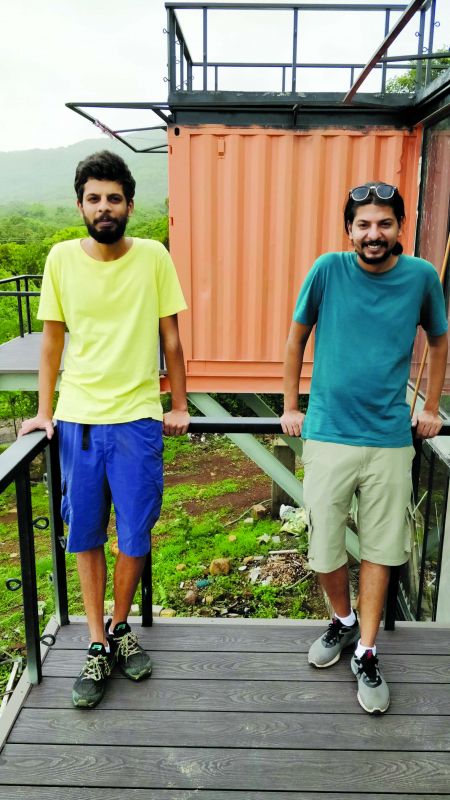 “We started by joining two containers side by side and cutting out the sheet in the middle. Since it is a container, they come with double height ceiling, which we have in the living room. And because of their shape, they allowed us to do a lot more,” says the 32-year-old.

The family project, which started in 2016, took three years to reach its final stage. With some professional help, the Pardiwala’s worked as a team. While their father chipped in with his architectural experience, their mother with landscape and water harvesting techniques.

“Since it is on slightly raised land, the summer heat can get a bit too much. Having visited the site through various seasons, the wind is like a constant force there, so we used it in our favour. The containers act like a funnel, where if you have the wind going through, it can increase the pressure and help ventilate the space much better. The wind doesn't allow hotter air to sit there. So we have used the containers in spaces we thought it would get hotter, like the common room," he says.

The bathrooms for each room, made from brick and mortar, are attached but not inside the rooms. “This way, plumbing doesn't pose a problem in the longer run," he shares. Talking about lighting their Orange Box, Mishal says it was easy and efficient to sort that out for the containers. Though the power lines were low laying, the family had to work around it. 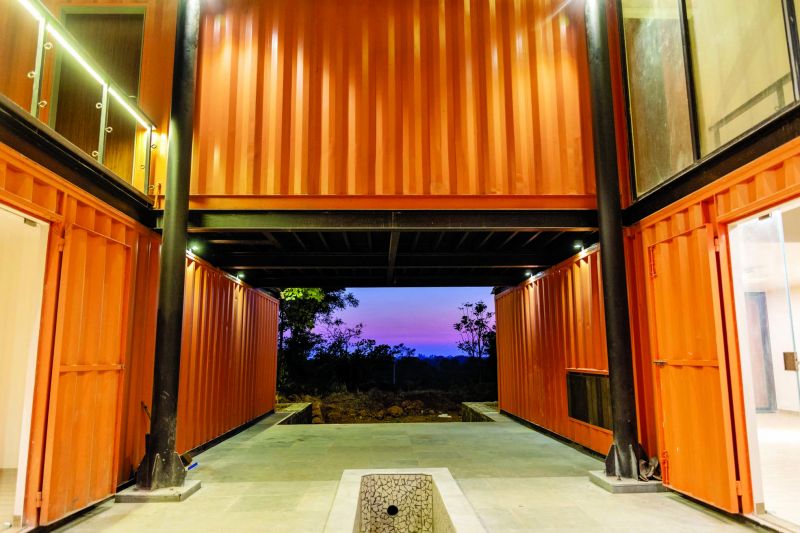 “You can keep the container frame intact, but it isn't a big deal if you remove the walls. You just have to reinforce it with a fairly light metal tube or section, as they call it, just to keep the windows intact. But if you are doing a ground plus 1, like ours, it is slightly more challenging. But eventually, when you are putting it together, the interior panelling is not very hard," he explains.

However, the Pardiwalas have installed glass wool insulation between the containers, which helps cut the excessive heat and sound. “These containers are made of metal, so if you were to heat the metal it is going to get extremely hot. And during rains, the sound of water dropping on the ceiling is way too much. This prevents the heat from entering and dampens the sound," says Mishal.

For the outside cool cover they have planted trees that provide shade. Additionally, they harvest rainwater, which helps in water reuse and cooling the temperature in the common area.

“The central part of the house is like a courtyard, that acts as a common space too. From the roof, we have siphoned all the water through the center of the house. We have run it down through chains to the center. We have done it this way so that the wind that comes through regularly pushes a pool of water, if any, sitting there through the chains. This kind of cooling is called evaporative cooling. The water in the center of the area can reduce the heat by a couple of degrees," he says.

The water is collected and stored in the tank that helps to replenish the bore well nearby. And to have a cleat view of the starry sky, the roof is semi-transparent.

While the family's goal was to see how far could they push themselves, they regard this journey as one of learning. “I think people will not be able to tell that it was made from containers, it will appear as a unique house. The aim was to showcase that one could achieve a really good finish while re-cycling a product. No plastering required, you just have to be mindful of where you want to put in things," concludes Mishal.