The risk of tipping cascades could be significant at a 2 C temperature rise, and could increase sharply beyond that point. 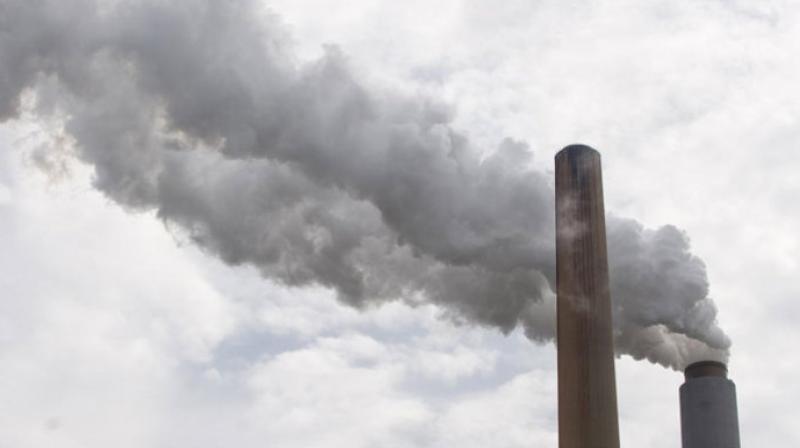 If polar ice continues to melt, forests are slashed and greenhouse gases rise to new highs, the Earth will pass a tipping point. (Photo: AFP)

The planet urgently needs to transition to a green economy because fossil fuel pollution risks pushing the Earth into a lasting and dangerous "hothouse" state, researchers warned on Monday.

If polar ice continues to melt, forests are slashed and greenhouse gases rise to new highs—as they currently do each year—the Earth will pass a tipping point.

Crossing that threshold "guarantees a climate 4-5 Celsius (7-9 Fahrenheit) higher than pre-industrial times, and sea levels that are 10 to 60 meters (30-200 feet) higher than today," cautioned scientists in the Proceedings of the National Academy of Sciences.

And that "could be only decades ahead," they said.

What is 'Hothouse Earth'?

"Hothouse Earth is likely to be uncontrollable and dangerous to many," said the article by scientists at University of Copenhagen, Australian National University and the Potsdam Institute for Climate Impact Research in Germany.

Rivers would flood, storms would wreak havoc on coastal communities, and coral reefs would be eliminated—all by century's end or even earlier.

Global average temperatures would exceed those of any interglacial period—meaning warmer eras that come in between Ice Ages—of the past 1.2 million years.

Melting polar ice caps would lead to dramatically higher sea levels, flooding coastal land that is home to hundreds of millions of people.

Where is the tipping point?

Researchers suggest the tipping point could come once the Earth warms to 3.6 Fahrenheit (2 Celsius) over pre-industrial times.

The planet has already warmed 1 C over pre-industrial times, and is heating up at a rate of 0.17 C per decade.

This cascade "may tip the entire Earth system into a new mode of operation," said co-author Hans Joachim Schellnhuber, director of the Potsdam Institute for Climate Impact Research.

Experts also worry about phenomena like wildfires, which will spread as the planet gets hotter and drier and have the potential to accelerate carbon dioxide buildup and global warming.

How they calculated this

The "Perspective" article is based on previously published studies on tipping points for the Earth.

The scientists also examined conditions the Earth has seen in the distant past, such as the Pliocene period five million years ago, when CO2 was at 400 ppm like today.

During the Cretaceous period, the era of the dinosaurs some 100 million years ago, CO2 levels were even higher at 1,000 ppm, largely due to volcanic activity.

To state that 2 C is a no-return threshold "is new," said Martin Siegert, co-director of the Grantham Institute at Imperial College London, who was not involved in the study.

The study authors "collated previously published ideas and theories to present a narrative on how the threshold change would work," he said.

"It's rather selective, but not outlandish."

How to stop it

People must immediately change their lifestyle to be better stewards of the Earth, the researchers said.

Fossil fuels must be replaced with low or zero emissions energy sources, and there should be more strategies for absorbing carbon emissions such as ending deforestation and planting trees to absorb carbon dioxide.

Soil management, better farming practices, land and coastal conservation and carbon capture technologies are also on the list of actions.

Researchers say it's not certain that the Earth can remain stable.

"What we do not know yet is whether the climate system can be safely 'parked' near 2 C above preindustrial levels, as the Paris Agreement envisages," said Schellnhuber.

Ten ways the planet could tip into 'Hothouse Earth'

Even if humanity slashes greenhouse gas emissions in line with Paris climate treaty goals, the planet could overwhelm such efforts and irretrievably tip into a hellish 'hothouse' state, top scientists warned Monday.

Under such a scenario, Earth's average temperature would stabilise 4 or 5 degrees Celsius above pre-industrial levels, rather than the 1.5 C to 2 C (2.7 or 3.6 Fahrenheit) cap called for in the 196-nation pact.

As it is, the world is struggling to curb the manmade carbon pollution that—with only one degree Celsius of warming so far—amplifies the likelihood and intensity of deadly heatwaves, droughts and superstorms.

But that challenge will become exponentially more difficult if Earth itself gets into the act, the researchers reported in the US Proceedings of the National Academy of Sciences (PNAS).

No less than ten distinct facets of what scientists call the Earth System could switch from neutral or helpful to harmful, eventually dumping more CO2 and methane into the atmosphere than all human activity combined.

Most have temperature "tipping points" beyond which the release of these planet-warming gases would be irreversible, at least on a human time scale.

"The feedback process becomes self-perpetuating after a critical threshold is crossed," the study said.

"The Earth System may be approaching a planetary threshold that could lock in a continuing, rapid pathway towards much hotter conditions—Hothouse Earth."

Earth's forests and oceans have together absorbed more than half of carbon pollution over the last several decades, even as those emissions grew.

But forests are shrinking, and oceans are showing signs of CO2 saturation, according to recent studies.

These carbon sponges or 'sinks', in other words, may be weakening.

Methane and CO2 trapped in the increasingly misnamed permafrost of Russia, Canada and northern Europe is roughly equivalent to 15 years of emissions at today's levels.

The release of these gases—negligible so far—would speed global warming and, in effect, hasten their own escape, what scientists call positive feedback.

Global warming of 3 C could condemn 40 percent of the Amazon forests to dieback, a process that would reach well into the next century, according to recent research.

Accidental or land-clearing fires—not accounted for in these models—could hasten this destruction.

In Canada, forests that gained CO2-absorbing biomass for most of the 20th century began to lose it around 1970, due mainly to climate-related insect infestations and fires.

Taken together, these forest dieoffs would release billions of tons of carbon into the air.

Dramatically shrinking polar sea ice, especially in the Arctic, means the deep blue ocean water that takes its place absorbs as much of the Sun's radiative force—about 80 percent—as was reflected back into space by snow's mirror-like surface.

The Arctic's will likely see its first ice-free summer before mid-century, and—in a 2C world—could be that way one-in-four years.

Over the last four decades, minimum sea ice extent has dropped by about 40 percent.

Experts disagree on how much global warming it will take to condemn the West Antarctic and Greenland ice sheets and how quickly they would melt, but all agree that such a tipping point exists, with estimates ranging from 1 C to 3 C.

The consequences for humankind would be catastrophic: Two-thirds of the world's megacities are less than 10 metres above sea level, as is much of the agricultural land that feeds them.

Together, West Antarctica's and Greenland's frozen reservoirs would lift ocean by 13 metres.

Another 12 metres of potential sea level rise is locked in parts of the East Antarctic Ice Sheet that are far more susceptible to climate change than once thought.

All of these processes are interconnected, the authors note, and the collapse of one could trigger another.

"The risk of tipping cascades could be significant at a 2 C temperature rise, and could increase sharply beyond that point."

"This cascade of events may tip the entire Earth system into a new mode of operation," said co-author Hans Joachim Schellnhuber, Director of the Potsdam Institute for Climate Impact Research. The "carrying capacity" of a 4 C or 5 C degree world, he has said previously, could drop to a billion people.