Musing about a shared past

An exhibition explores the repercussions of colonialism through contemporary artwork from India, Indonesia and The Netherlands. 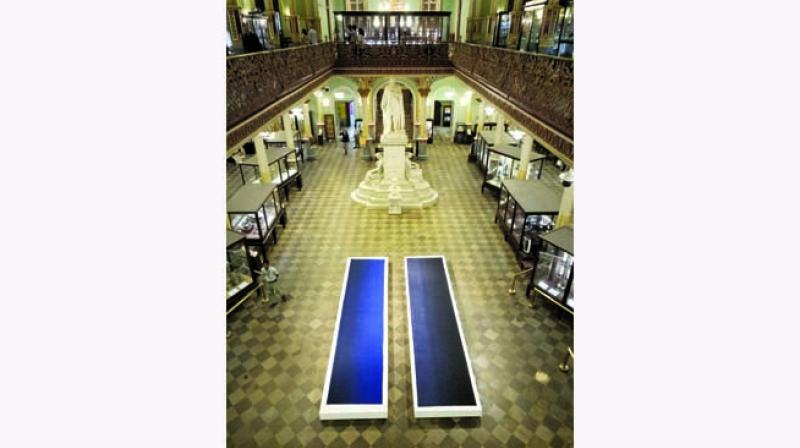 On stepping into the Industrial Arts Gallery at Dr. Bhau Daji Lad Mumbai City Museum, one is confronted with what seems like two large swimming pools. The aqueous-like installations are actually mounted pieces of cotton fabric, hand-printed with traditional Indonesian Batik designs in shades of deep blue and black. The creations, titled Blue to Black and Black to Blue, are the works of Berlin-based Dutch artist, Willem de Rooij, who through his art seeks to remind us about the Dutch colonial occupation of Indonesia and how it led to traditional designs of the island nation being mass produced and shipped to West Africa. His installation also highlights racial stereotypes ascribed to Indonesians and Africans as the Dutch referred them to as the ‘blue people’ and ‘black people’ respectively.

Such exhibits, which explore the repercussions of colonialism through contemporary artworks from India, Indonesia and The Netherlands, make up Mindful Circulations, an exhibition curated by Amsterdam-based independent curator, Kerstin Winking. The exhibition ties together these three countries, as each of them have had their brush with colonialism, either as the ‘coloniser’ or the ‘colonised’ (The Dutch East India company was active in India and Indonesia from the early 17th century) and the artworks in the exhibition retain their roots in specific colonial pasts, whose impact continues to influence global contemporary culture.

Talking about what inspired her to put together Mindful Circulations, Kerstin says, “I am based in Amsterdam where I studied art history, museums and literature. So, I’m very connected to the city of Amsterdam. I noticed that we have these great national museums, which until quite recently, tended to glorify Dutch colonial history. But, in recent years, an increasing number of people are asking political questions about the representation of these colonial histories. The museums cannot get away with glorifying it anymore,” she says, and adds that her own reading of post-colonial theory inspired her as well, as she views ‘post’ colonial as not something of the past, but as inspiration for ‘de-colonial’ action.

And artistic representations of this action can be found in the works of artists like Ignasius Dicky Takndare, a Papua artist who uses his artwork to highlight the exploitation experienced by his people, or Rashmimala, who explores the impact of colonialism through the Mangifera Indica, or mango, which is native to the Indian subcontinent, and others. Kerstin says that her decade long study of contemporary art practices in India, Indonesia and the Netherlands helped her chance upon some common themes represented in the works of these artists, like “trading relations that had an influence on the cultural makeup of these countries and the formation of images - how the world is presented to us. The works also highlighted the role of indigenous people and early anthropologists within the colonial administration. I was also looking at how the ‘colonial’ is represented in historiography and the institutions of historiography,” she reveals.

Though the artworks are arresting just by their visual brilliance, Kerstin hopes that visitors will take home a few thoughts, like how the experience of colonisation, though rooted in the past, continues to colour contemporary narratives. “I hope that visitors start asking questions about whether this affects their lives and in which ways they can find forms of resistance against this colonial thinking that is so present in our daily lives. I also hope that there will be some intercultural or international exchange and that even though we speak different languages, we have some ways of communicating with each other through art and culture,” she says. But above all, she hopes that these artworks, that underline mutually shared histories and experiences, will help counter divisive narratives that abound today.

“I really believe that there is a similarity between Dutch and contemporary Indian artisans, in that, all of them doubt the grand narratives that are often told to us by fundamentalist politicians. I think art is a way of spreading doubts about these grand narratives,” she concludes.
— Ongoing till July 14, at the Kamalnayan Bajaj Special Exhibition Gallery at BDL

All (hair) dressed up