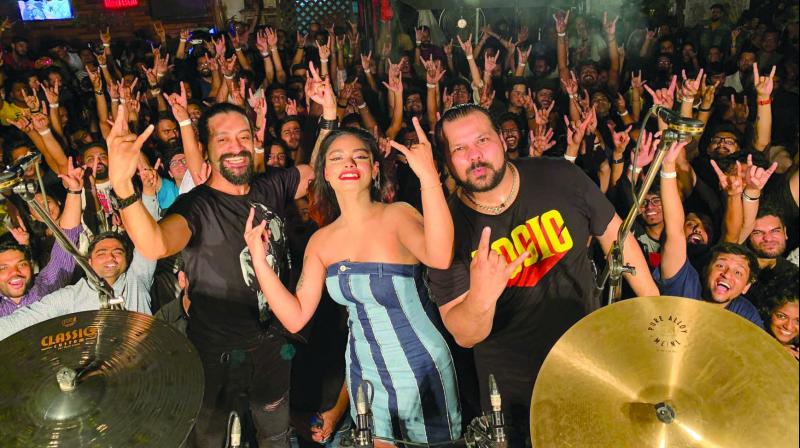 Creating quite a storm with his  strings, guitarist Chandresh Kudwa is on a high as he promotes his latest album. Training under Bismarck Rodriguez, a famous guitar teacher from Mumbai, Chandresh having finished the first leg of his Free Spirit Tour has already begun planning the next leg. Talking to the musician, we find out more about his new album and about his tour...

Chandresh’s first memory of playing music dates back some 22 to 23 years back. “I was learning music with a reputed teacher – Mr Bismarck Rodriguez. His son-in-law was coming out with a pop band. The band offered me a role to play guitar as I was one of those good students.  So, I took the offer, “ he starts off when asked what was his first memory of music. For Chandresh, life itself is his biggest inspiration. Music means a lot of different things to different people but the one word Chandresh uses to describe music for himself is – expression.

His tour was launched in November 2018 and his album also called Free Spirit is his first official solo guitar instrumental album. He shares, “I started writing the album in 2017. Once I had the structure for most of my tunes ready, I contacted Gino Banks(drums) and Mohini Dey for all the bass parts. We had a product ready with everybody’s creative input. Being a session player and having guitar institute as well, Chandresh felt that he ended up playing a lot for others.

“The creative ideas that I had were unexpressed and I felt trapped.

Since, I’m not a singer, all my expressions is through the guitar. Whenever I am writing a tune, there is a particular emotion behind that. One of the songs, Pink Star happened in my daughter’s room,” he says adding that this album was sort of a creative output of the all the ideas he had and it’s an expression of himself. In the first leg of his tour, he covered Mumbai, Pune and Bengaluru. The second leg he says will start post September this year.

When asked which city he was most excited to play at, very diplomatically he says that every city they played at was exciting. “Bengaluru is the capital city for all things music. So we really loved playing there.” On what it was like performing with Gino Banks and Mohini Dey, he shares, “Gino and I go way back. We used to play in a band together some 10-15 years ago.

It was kind of like a reunion for the both of us to play together. Mohini too is an extraordinary bass player. We had great fun playing with each other.”

For now, Chandresh is planning and working towards the next leg of his tour although the places he will be going to was not revealed.