Experts divided over existence of concealed chamber behind tomb, which some believe could be resting place of lost Queen, Nefertiti. 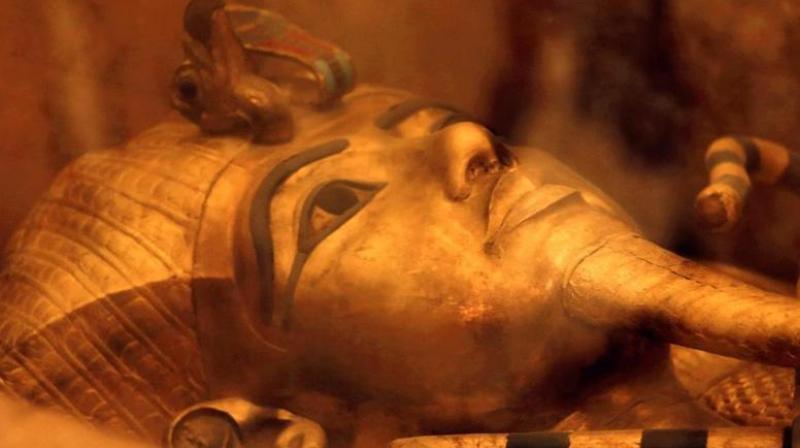 In 2015, the antiquities minister said that there was a “90 per cent” chance that something was behind the walls of Tutankhamun’s tomb. (File Photo/ AP)

Cairo: Researchers at Italy’s Turin Polytechnic University have found no evidence of the existence of any hidden chambers behind the walls in the tomb of ancient Egypt’s boy-king, Tutankhamun, the Antiquities Ministry said on Sunday.

Experts have been divided over the existence of a concealed chamber behind the tomb, which some believe could be the final resting place of the lost Queen, Nefertiti.

International interest in Nefertiti is high. She died in the 14th century B.C. and is thought to be Tutankhamun’s stepmother, and any confirmation of her final resting place would be the most remarkable Egyptian archaeological find this century.

Discovery of Nefertiti, whose chiselled cheekbones and regal beauty were immortalized in a 3,300-year-old bust now in a Berlin museum, would shed fresh light on what remains a mysterious period of Egyptian history.

The Egyptian Antiquities Ministry said in a statement that months of studies by Italy’s Polytechnic University in Turin has shown that no such chamber exists.

“The studies ... have shown that no chambers exist, or even an indication of any threshold or door frames, which contradicts the previous theory that had assumed the existence of passages or chambers adjacent or inside the burial chamber of King Tutankhamun,” the statement quoted Mostafa Waziri, secretary-general of the Supreme Council of Antiquities, as saying.

In 2015, the antiquities minister said that there was a “90 per cent” chance that something was behind the walls of Tutankhamun’s tomb after an initial reading of radar imaging suggested such a chamber existed.