On International Women’s Day, Meet these trailblazing women who believe nothing is impossible and no achievement beyond their reach. 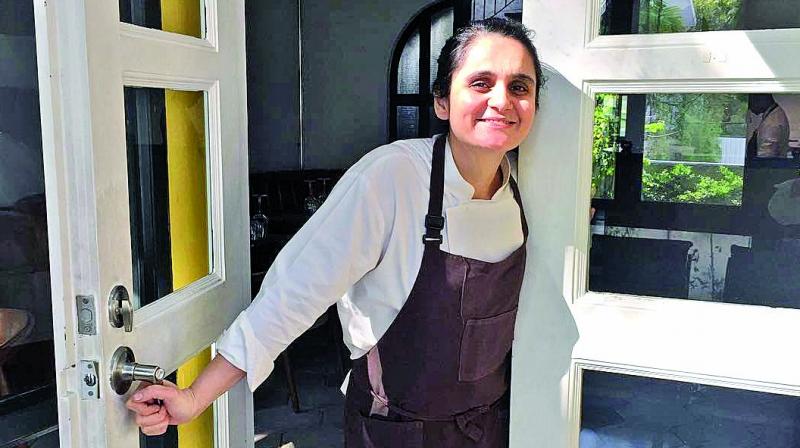 While following the crowd is easy to do; it takes grit, determination and sometimes, a thick skin to silence naysayers and swim against the tide. This feat can be tougher still if you’re a woman, but here are a few women who didn’t let convention or criticism stop them from pursuing their dreams. Here are women who were the ‘firsts’ in their fields, reminding us that nothing is impossible and no achievement is beyond a woman’s reach.

Chef Garima Arora:
Founder of Gaa, an avant-garde restaurant in Bangkok, she is the first Indian woman to receive a Michelin star

On her achievement: It reinforces my connection to my own country. It makes me feel proud to be an Indian.

On confronting challenges: There’s always a combination of both, internal and external, challenges. Nobody’s life is a fairytale. The time you spend in the kitchen is time you spend away from your loved ones and family. Every time they’re celebrating holidays, like Diwali or New Year’s Eve, I’m always working. Staying away from these moments that matter so much is one of the toughest things to do. I think internally, this is the biggest conflict. Externally, I think finding the right people to believe in your vision, who have the same understanding of what you’re doing as you, those are the conflicts I’ve come across.

Her mantra for success: Hard work; that’s the only thing I believe in and put myself through. If you stumble along the way, stop and evaluate and then, work hard again.

Her message to women: I think the biggest thing we  women have to  do is stop apologising for our choices. It’s always a choice between family, career, motherhood; we have so many roles we fulfill. You are a wife, a daughter, a mother, a daughter-in-law, and along the way, you make choices.  Stand by your choices and stop apologising for them. We don’t owe anybody an explanation for the choices we make. We have to be strong and confident.

Dr. Seema Rao:
Having trained soldiers, paramilitary and police personal and commandos from every elite force, she is India’s first female combat trainer. She will be receiving the Nari Shakti Puruskar 2018 from President Ram Nath Kovind today.

On the rigours of her profession: Life is strange, you sometimes start at one place and destiny takes you somewhere else. I was supposed to be a doctor but ended up training commandos. I think that my freedom fighter father's patriotic ideas influenced my mind in wanting to serve my soil. As a guest trainer to the Indian Forces for almost two decades, I have traveled to hostile locations like freezing valleys, high altitude regions of Siachen, jungles of MP, para units in deserts. I have suffered multiple injuries, been bedridden for six months at times, lost out on having a family or children, and have been shot at by terrorist forces.

On confronting challenges: My mother-in-law loved me but our ideologies did not match. She wanted me to be a devoted wife taking care of home and the kids. Though I could manage home and work, she often had reservations. My hubby was very supportive. He encouraged me to go ahead without guilt. I did not have my biological child since I did not want to leave aside my assignments. My hubby stood by me through the decision. Later on, to complete the family, I adopted a girl child. My mother-in-law later saw the wisdom of my decisions and we became the best of friends. She even died in my arms.

Her Message to women: I think its high time men understand and acknowledge a woman's capabilities. Man and woman can combine their forces (attributes) to win. There is nothing a man can do that a woman cannot do. Women, don't be afraid to select an unconventional career or path in life. Don't be deterred by obstacles. They are a part of success. Learn to override or rise above them. Victory belongs to the one who dares to do what’s difficult or impossible. Dream high. Aim high.

On choosing her instrument: As a child, I received vocal training and learnt the violin, but I was always fond of percussion. I would drum on tables and vessels. Even though I went to violin class, my attention was towards the mridangam classes happening in the adjacent room. One fine day, I stepped into the mridangam class and requested Sri. T.R. Harihara Sharma, father of Vikku Vinayakram to teach me. He immediately accepted me as his student. After three years of vigorous practice and classes, I started playing for small concerts. I was mesmerized by Vikku Vinayakram’s playing and requested him to teach me the ghatam. I started playing the ghatam when I was 16.

On confronting challenges: Some male musicians and mridangam artistes don’t like playing with women artistes. So, I decided to overcome this problem by inventing ‘Ghata Taranga’ to bring my playing skills into focus. It is a unique way of playing six to seven ghatams of different notes by a single player. I also started my own band, an all-female ensemble called Stree Taal Taranga to give a platform to other female musicians. We have traveled to several places in India and abroad.

Her message to women: Set a goal and work hard to reach it. Always feel energetic to fulfill your dreams. We can achieve anything if we put our mind to it and find ways to reach heights in our field.

Apsara Reddy:
As National General Secretary of the All India Mahila Congress, she is the Party’s first transgender office bearer

On her appointment: It was extremely emotional for me because, all our lives, as transgender women, we are told we’re not good enough or there are only certain things that we can do; there is no meaningful place in this world for us. Very often, we’re belittled and there are so many harsh, cruel things said about us. So to recognise us as women and induct me into the Mahila Congress, which is a frontal organisation of the Congress, was a huge validation and reassurance. I felt that all the decisions I’ve taken in my life have finally paid off and I felt very proud.

On confronting challenges: My journey has been with a lot of ups and downs, but I turned every barrier into a stepping-stone. The criticism, the de-motivating talk, the judgment, I motivated myself to cross every hurdle and as I crossed turning points in my life, people found answers in my success and I think acceptance happened quite organically for me because I broke barriers with conviction and dignity. I would advise everybody else facing such battles to follow your heart and mind and don’t be cowed down by prejudice or small talk.

Message to women: I would tell every reader of yours, especially women, to dream for themselves. Very often, women dream for their children, their husband; they pray for their husband and children. I think women should say that prayer for themselves, have a dream of their own. You have a mind and a skill set, so don’t waste it. it's not just about keeping others happy, following a path of individual happiness also is very important.

On issues close to her heart: I want to fight for gender justice and make sure that girl children and women are roped into mainstream policy are also legislated for equally. I want to push for the Women's Reservation Bill, bring more women into leadership roles, work with women and child welfare at large, and work closely with NGOs that work in the sphere of women’s rights.