Woman with a mission

Her work is not only limited to the walk or the workshops, she is also using art to spread awareness. 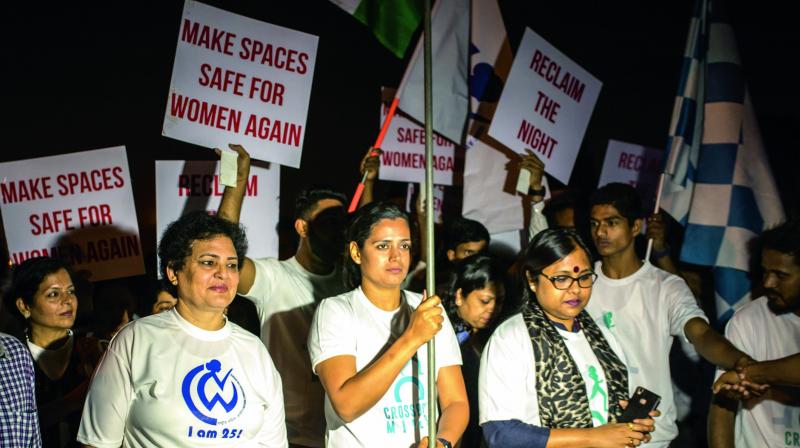 The Delhi Night Walk with Srishti Bakshi (in centre)

Under the shadow of the India Gate, that embraces in itself the history of India, another significant moment was created as Srishti Bakshi reached Delhi as a part of her journey, walking all the way from Kanyakumari to Kashmir, spreading awareness about women empowerment.

The lone crusader decided to start the movement, CrossBow after reading the news on the evening bus back home in Central Hong Kong about a gang rape of a mother and daughter in India’s Bulandshahar district. The 31-year-old quit her marketing job and with family behind her back, started an action-oriented initiative —  empowering women through workshops.

Prior to the walk she was about to take in the streets of South Delhi, reclaiming them for the women who are forced to think twice before venturing out in the night, she said, “Walk is a journey in itself. With wheels beneath your feet, you just don’t fly but you fly-by the people with whom you were meant to interact. It is because of the choice to walk that we met 25,000 people who wanted their voices to be heard. Since we don’t belong to the authoritative infrastructure and are their to listen, they open up. One needs to stop by the roadside, understand what a woman is going through — stories that will keep you wide awake through numerous nights.” Thus, walking has been instrumental in pushing Bakshi into every nook and corner, which otherwise would have not been possible.

Unlike the mainstream focus on the girls and women of India, Bakshi strongly feels that both men and women should be brought in the same room. “It’s hard to get men to discuss about these issues,” she confessed. “Since, we are talking about women’s safety, it is assumed that the audience will and should be women. I always request people to let the men in because I believe that there is a big gap in understanding between the two. Ask a man what are the problems women face and their replies are very bookish — female infanticide, dowry and early marriage — totally oblivious to their female counterparts’ reality. While, on the other hand, women talk about how they are pressured to get married or have been married off at an early age of 15, and how they feel violated.

When women open up, there is a slight possibility that men can understand the gravity behind the situation of women,” shared Bakshi. She also makes sure that there are men who equally participate in the workshops, panel discussions and talk about wonand equality.

Her work is not only limited to the walk or the workshops, she is also using art to spread awareness. A total of 30 walls in various cities will be painted across the country, with each individual wall having a motif. These works will come together as a whole piece at the end of the walk. Bakshi’s team together with ITC Vivel ‘Ab Samjhauta Nahi’ campaign have already painted 17 walls across the country celebrating women who have never compromised at any level. “It is essential that we talk about the unsung heros —  women who have emerged victorious from their circumstances and can be an inspiration for the rest. Though we have a lot of inspirational women, we don’t have enough. Also, the ones who are considered extra ordinary are out of reach and are often unable to relate to the masses,” shared Bakshi who is adamant about breaking this divide and giving platform to women like Nilam Drivedi, a sub-inspector, who is fighting gender equality on a daily basis in the police system, households and society.

With two-third of the walk being over, the feedback has been amazing. “We don’t leave people behind with empty promises, rather, we have a well planned programme — focussing on financial and digital literacy — no matter what you want to become, the cellphone in your hand is the best way to acquire it,” added Bakshi who disagrees with the fact that education is the solution to everything. “I have seen rich and educated families treating women in the most demeaning manner. They have to beg for money, face violence and often become victims of marital rape. It’s the mindset that needs to be changed and it all starts with the head of the family. So, we appeal to the grandfathers, fathers and brothers to be supportive of the women in the family.”

For the CrossBow Miles app, Bakshi has collected 62 million steps. Once, the walk is over, Bakshi intends to submit her research paper to the Union Ministry of Women and Child Development.