Barista on a bike

Binny Varghese is on a coffee-tasting trip across the country. 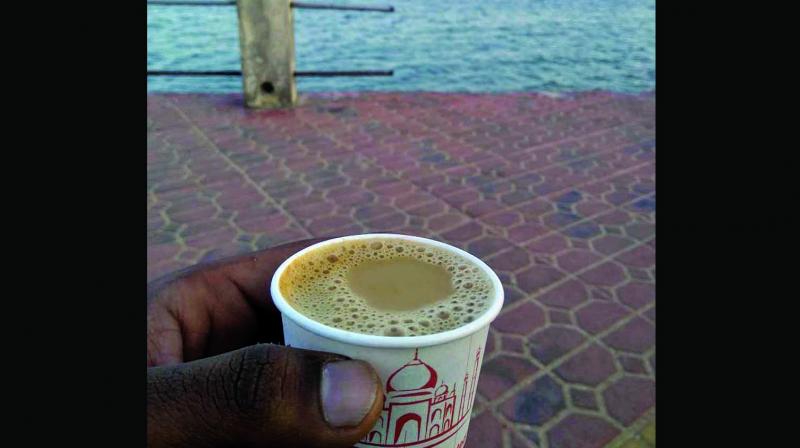 Binny is not just travelling and drinking coffee. He is talking to people that he meets at every coffee joint.

Some people are addicted to coffee. They drink it in the morning, afternoon and even before going to bed. But how far will you go to taste a good cup of coffee?

Meet Binny Varghese, a 28-year-old Malayalee coffee lover. He has made it his life’s mission to have coffee from all over the country! Given that there are thousands of coffee shops in India, he has set himself quite a goal.

On his RE Himalayan, the divine mount of a riding enthusiast, he is travelling across India to taste some of the finest coffees that the country has to offer. You wonder what motivates a man — apart from a taste for coffee — to embark on such a unique mission. Binny says, “My original motivation was simply to accomplish something singularly unique. However, since that time, I have discovered the many joys of traveling and photography.  Coffee has always been a part of my life. So I have decided to go on a journey, for coffee.”

Binny is not just travelling and drinking coffee. He is talking to people that he meets at every coffee joint. He wants to know their coffee stories. He believes coffee is about the experience. If you are a coffee lover, he wants to know why you love it and vice versa. He loves to talk about the coffee he is having and documents it, sometimes in short videos and sometimes as photographs or notes.

“The coffee scene in India is very diverse. That diversity induced me to travel and taste it. Here, most people do not know what coffee really is. They are surprised when they come to know that this cute little bean is essentially a seed of a cherry from the coffee shrub,” he opens up on his knowledge about coffee.

During his unusual journey, he has tasted some of the best coffees in the country. “One of the best coffees I have had in my life is from a small coffee joint in Sangla, Himachal Pradesh. An elderly woman who was at a small joint by herself made me a coffee with a little bit of cardamom and milk (made from milk powder, as they don't have a lot of fresh milk supply over there). The thing I liked about it was, it was just the right amount of everything,” he says.

Since he has been travelling from his academic years, he was lucky to taste some of the finest coffees around the world. “I have had the most expensive coffee in the world, Kopi Luwak, which is made from the poop of the Indonesian Sumatran Civet, the Turkey coffee from Saudi Arabia, Vietnamese coffee made with Milkmaid, Thai elephant coffee and many more. Some of them are made in a very unusual way,” he says.

Binny also works for a company that has a chain of coffee bars across the country. So, his colleagues were also very supportive about this journey.  “We have other cafes. I thought of covering those, so as to also understand the psychology of baristas (people who make your coffee). To see what they think and know about coffee,” he says.

According to Binny, there is one myth in India that if you are a real coffee lover you should have it black. But he tries it with and without sugar and milk. It’s all about personal preference, he feels.  And he wants to make more people aware about the coffee culture around the world.

“Here in India, most people in small cities order cappuccino because that's the only one they know about, maybe through cinema or TV or because the person sitting in front of them ordered the same,” he says. He wishes to start a new coffee culture in the country and make people aware of the drink.

“So far, I have been stopping at places during the trip to have my coffee. I’ve had 353 coffees from different joints! My favorite coffee at the moment is bulletproof coffee, which is black coffee with a spoonful of butter. It gives an interesting, velvety and creamy texture,” he says.

He will end his journey in Baroda where he lives right now. He calls himself a ‘barista on bike’. He is also planning to write a book on his quest for coffee, best to be read with a cup of coffee in hand!