In a first, cricketers over the age of 50 will be representing India In Cape Town at the ‘Over 50s’ World Cup. 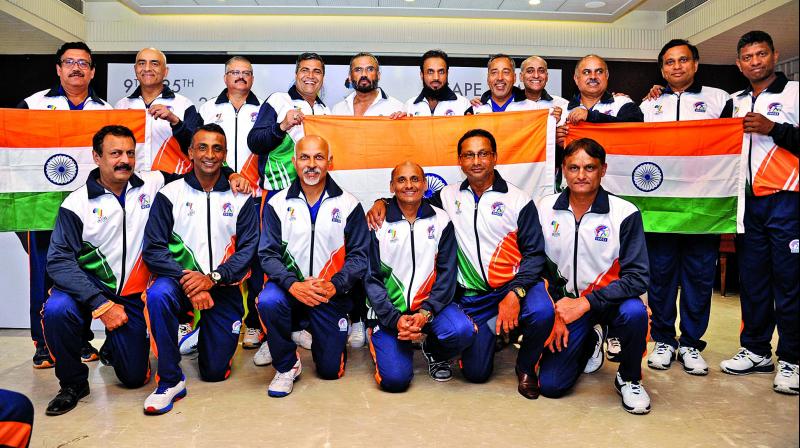 The Cup will be celebrating cricket in its purest form, hence brings the 50 over format irrespective of the age factor on the pitch.

A bunch of over 50 cricket fanatics are all set to make history and take over the pitch in South Africa as they represent India in the Over 50s Cricket World Cup, to be held in March. For the first time ever, a squad of 16 cricketers from all over the world has come together to make India proud irrespective of their age and purely for the love of the sport.

With players from India and 11 NRIs —  from England, Huston, New Zealand and Canada — the team will be captained by sports and brand guru Shailendra Singh. “The focus for the next 30 days is to prep for the World Cup as being over 50 needs a certain skill set. The mind is active and mature because you have seen life but to put that in the application is a tad bit difficult. Suddenly, it is a new journey for us,” says Singh who has been playing cricket for Bombay Gymkhana for 35 years.

The Cup will be celebrating cricket in its purest form, hence brings the 50 over format irrespective of the age factor on the pitch. “The International Veteran Cricket council based in Sydney curated this format as they believe T20 is not the pure form of cricket,” adds Singh. The council has also put forward a tough draw for India as they have been placed in Pool B and will first face England, followed by Pakistan and the final match with South Africa in Cape Town.

For vice-captain Iqbal Khan, the opportunity is nothing less than an honour, no matter what age group. “We as Indians are super passionate about the game of Cricket. I’m very confident and sure that we will live up to expectations," he says.

Coached by Ajoy Roy – who was instrumental in bringing the team together – the players are leaving no stone unturned. After Roy posted across social media calling out cricket enthusiasts over 50 to play for the country, a total of 38 ex-cricketers turned up at the camp in Parsi Gymkhana. Out of which a squad of 20 was picked and 16 announced. “I was determined to have India on the map of Over 50s cricket and it's extremely satisfying to see the team shape up bit by bit. Each member’s sensibility adds a special element to the team and I'm sure they will give it their all to make our country proud," says Roy.

Singh adds that not many have come forward for the event but those settled abroad have shown interest. “Iqbal Khan who moved to London used to play Ranjhi here and now plays county cricket there. Then we have PG Sunder who moved to England nine years ago, used to represent Chennai in Ranjhi Trophy,” adds Singh.

While the team is confident about their game, they are also apprehensive of making their debut against teams that have been playing this format for years. “It is overwhelming because the opposition has some big names. South African team is led by Jonty Rhodes. I have been watching their training videos online and they are doing it like 30-year-olds. Australia, South Africa and England have functional 50 plus county leagues and they have been playing this for five years. Theirs is well-oiled machinery,” laughs Singh.

The captain apart from strategising the strength and weaknesses of his team has dug out in-depth details of each opposition player. “With the help of my team, I have dug out the history of each player, like who is divorced and struggling emotionally. And have shared that with management and each team player. So now, we know who is who and what he has done is past and is doing currently,” he grins.

But for their match against Pakistan, Singh believes the energy that drives them all off the field will help them score a win against them. “I feel that teams like Pakistan can get very easily intimidated. Though it is an extremely qualified team, we can put them in the back foot easily because they lost everything including the U-19 match on Wednesday. We have a couple of bowlers that they should be pretty uncomfortable against,” informs Singh.

Unfortunately, budget constraints have lead to the team players practising individually. “Ours is a talented squad and they all share the feeling of patriotism. I just hope we succeed and by the next World Cup in 2021 that is to be held in India, we will get a lot of players. Even the ICC has got their eyes on this world cup and will hopefully be sending a team to oversee the tournament in South Africa. And if we perform well, the BCCI will not be able to ignore us,” concludes Singh.