An inspiration to all women whose dreams took a backseat when motherhood took over, Saritha believes in body positivity. 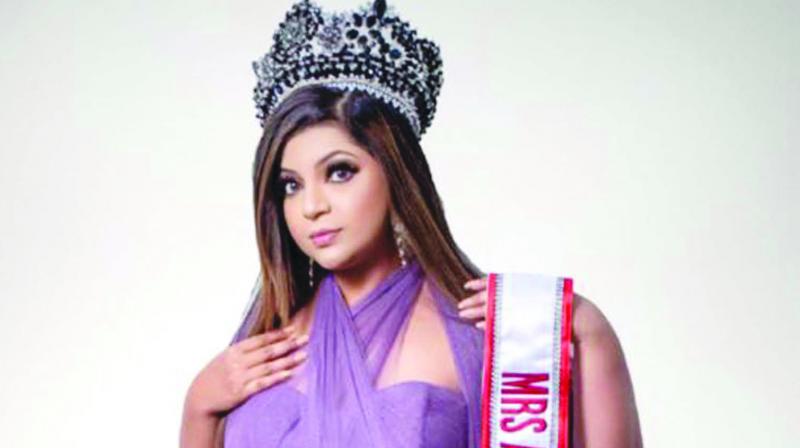 As a teenager, Saritha R. Menon was in awe of cosmetics and fashion shows. She adored the way models carried themselves on the ramp, their posture and expressions oozing confidence. She imagined herself as a pretty model and dreamt of stealing the spotlight, but it took her several years and several stages — of marriage, motherhood and more — to realise the dream. At 38, Saritha, who has her roots in Thrissur, is a plus size model and has been crowned Mrs. Australia United Nations.

Looking back, the voluptuous model says, “My dad was an employee with Lakme and during my childhood in Mumbai, I had exposure to fashion shows and deep down my heart, wanted to walk the ramp at least once in my life.” But life had other plans.

After her marriage to Thrissur native Ram Menon, who runs a financial firm in Sydney, Saritha joined her husband’s business as an accountant. Later, they had two children and like any career-oriented couple, the two juggled with familial and professional responsibilities. It was then that life-turning day came.

Saritha recalls it all, “A media firm had come to interview my husband’s business. I told them I too would get ready for the shooting, but they seemed uninterested and asked, ‘Do you have any achievement?’ I was shocked and hurt. I kept thinking what I have been missing out and what my identity has become.” But she didn’t dwell on it too much and decided to pursue her long-forgotten dreams. A trained Bharatanatyam dancer, she was confident and believed in her talent. Luckily, she got an offer to grace the runway.

Beauty pageants followed. Last year, Saritha became the winner at the Mrs. South Asia India pageant and Mrs. South Asia New South Wales pageant held in Melbourne. In the Mrs. India Worldwide pageant in Adelaide, she won the titles of Mrs. Talented and Mrs. Vivacious. Living her dream, she also got the opportunity to be part of the Lakme Australia Fashion show 2018.

An inspiration to all women whose dreams took a backseat when motherhood took over, Saritha believes in body positivity. “In a world where people are being constantly fat-shamed, I want people to see beauty in every person. Their bodies might not fit the beauty standards, but inside, people are very beautiful. Size of body has got nothing to do with beauty,” adds the plus-size model, who has been settled in Australia for eight years.

As an advice to women who live in the cocoon, she says, “Let the inner beauty speak for you. Fight insecurities with confidence and grace. Self-acceptance is the key. Then, the world will stand behind you, to help you conquer your dreams.”

Shuttling between Australia and her parents’ and in-laws’ places in Chelakkara and Irinjalakkuda, Saritha is prepping up for the world finals of the United Nations pageant, coming up in November in New Delhi. “It’s a great honour for me as an Indian to represent Australia in my homeland,” she concludes.