Sailesh Singhania’s collection from a bygone era was recreated with traditional threadwork, merged with a pastel palette. 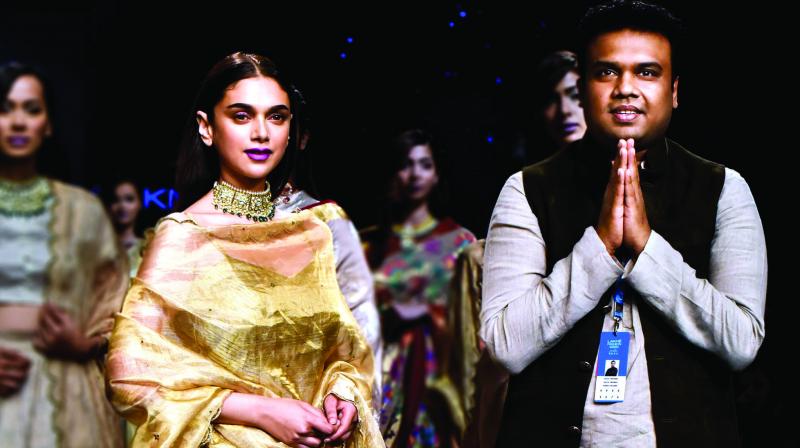 Who would have thought that celebrated poetess Sarojini Naidu’s poem about Queen Gulnaar, The Queen’s Rival, could be the inspiration for city-based designer Sailesh Singhania’s collection for the recently concluded Lakme Fashion Week! But Sailesh’s beautiful collection did complete justice to the brilliant poem composed by the Nightingale of India.

Talking about the thought process behind his LFW collection, Shaahana, the Hyderbad-based designer says, “Through my collection I wanted to showcase all the various famous weaves of our country, with different motifs and stories. So, we chose to have clothes and designes from the four major textile craft of the country — Banrasi, Paithani, Jamdani and Kanjeevaram. In fact, we tried to retain the natural colour of the yarn.”

The collection took around  a year to complete. However, the biggest challenge for Sailesh was to convince his artisans to weave something different. “The art of weaving has a deep rooted history in India, and thus the weavers also have certain aesthetics to follow. And I was asking the weavers to do something very different from what they traditionally do. For example, my Kanjeevaram weavers were not happy that I asked them to weave a pastel-coloured saree. They have always used bright colours, and to convince them was a bit tough.”

Sailesh, who is a big name in the fashion industry now, believes that LFW has helped him get a bigger platform. “The fashion week has helped me a lot by showcasing my collections and encouraging me. I got a platform where I and my craft was noticed by people across India. I got recognised for my designs. Such shows have also motivated me to keep helping the weaver,” Sailesh concludes.