Please keep your seatbelts on

Have a habit of standing up in a flight even when seatbelt sign is on? Indigo really wants to know why. 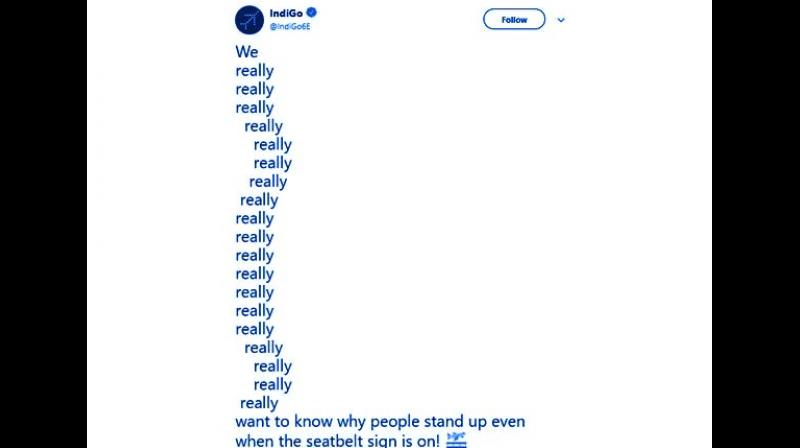 One of the first brands to interact with customers through this meme was Google India. (Photo: ANI)

New Delhi: These days, brands go an extra mile to engage with customers. While it’s not unusual for brands to interact with users on social media, we rarely see them sharing a meme to engage with their followers. But that’s exactly what Indigo airline did.

For those who are unaware of the 'we really really really’ meme, this involves using the word ‘really’ multiple times, in different lines so that it creates a curved pattern and this meme is very popular on Twitter and Facebook currently.

Shortly after the meme was tweeted, thousands of users responded with some witty comments. While some answered the question by the airline, others replied with funny counter questions. Complaining about the lack of leg room in the flight, a user wrote, “Because there’s no leg room on your flights, Nancy.” Some users chose to ask more serious, pertinent questions like, “We really really really really... want to know why do we have to pay for web check-ins.”

This is not the first time a brand has used the ‘We really really really’ meme to strike a fun interaction with its twitter followers. In January, Google India took to its Twitter handle to ask why people are chasing the Google Assistant to marry them. "We really want to know why you keep asking the Google Assistant to marry you," read the tweet by Google India.