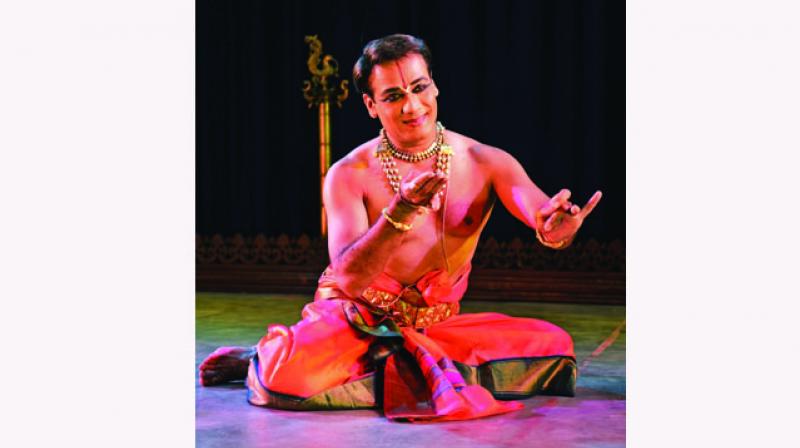 Bharatanatyam, a later christening for what was known as Dasi Attam, in both its performance spaces of temple and court, given its history with the anti-devadasi movement played out at a high pitch in south India of the late thirties and forties of the last century, was always a tradition associated with female dancers.

In fact, it can be said that the history of the dance has been written on the body of the devadasi, the professional female practitioner of the past. The nattuvanars presiding over and conducting the recitals were teachers and not performers — though history has it that some nattuvanars like the legendary Meenakshi Sundaram Pillai were fine non-performing dancers. The late Muttukumar Pillai who taught in Kalakshetra for some time danced with his sister Kannamba and the famous Tiruvarur Gyanam. So did Kuppiah Pillai who danced in female costume as did the famous E. Krishna Iyer who started learning Bharatanatyam around 1923 to equip himself for a theatre role as Ratnangi in the play Sarangadhara and later as Malavika in  Malavikagnimitra. The great Meenakshi Sundaram Pillai taught male dancers like U.S.Krishna Rao and the Indo-Burmese world-famous dancer Ram Gopal (1912-2003). The latter with his body beautiful, presenting Bharatanatyam items for cosmopolitan audiences turned out in ornate designer costumes, changed the concept of the male in Bharatanatyam. With the change of performance context after the devadasi’s support structure collapsed, with non-traditionalists starting to enter the Bharatanatyam fray, it was in Kalakshetra that Rukmini Devi overtly encouraged young male recruits like C.V.Chandrasekhar and V.P. Dhananjayan.

Talking about his learning days, V.P. Dhananjayan said that Rukmini Devi made learning Kathakali compulsory for the male dancers, so as to imbibe in them the ‘paurusha’ stance and bearing, which the dance classes in Bharatanatyam with the boys just following the female students, was not fully achieving. The idea of the male dancing as a male and not in imitation of the female was very important for Rukmini Devi, who wanted strong young male performers to fill the male roles in her dance drama productions. V.P. Dhananjayan also maintained that though they played the male roles in the nritya-natika presentations, the boys rarely got chances for solo Bharatanatyam presentations. C.V. Chandrasekhar (the only one who never learned Kathakali) often reminisces on how the male aspirants became the butt of lewd remarks by the public as also critics and he cannot forget the insult of a top critic writing about his performance that he had danced well despite being a male dancer! Even now, after all his laurels including a Padma Bhushan, this guru/dancer who led the faculty of Bharatanatyam in the Baroda College for years, cannot forget how despite the high quality of his art, he was never considered to represent India in foreign festivals because of being male. The late Guru Adyar Lakshman, another Kalakshetran, also told me how walking down the street, he was often treated to contemptuous remarks. Public opinion was not at all open to the idea of a male dancer in Bharatanatyam. And one could not forget the female-centric repertoire which portrayed the nayika in myriad situations and moods, which the male dancers found unsuitable. Rukmini Devi, in fairness to her, with her accent on the bhakti mode, set to dance many Keertanams, (Meenakshi Sundaram Pillai himself composed Ananda Natana Prakasham), creating and bringing into the repertoire, a slender list of items for the male. When V.P.Dhananjayan started off on his own, away from Kalakshetra, he concentrated on composing a whole margam of items keeping the male dancer in mind. One recollects how the late Muttuswamy Pillai, seeing the talent in his French disciple Dominique Delorme, composed a Varnam with a totally male perspective, especially for him. C.V.Chandrasekhar has also composed a Varnam for the male dancer which his disciples like Praveen Kumar have featured on stage.

The male dancer when older naturally stepped into teaching though in performance space, he existed without the recognition he deserved for quite some time, till dancing couples like U.S.Krishna Rao and his wife Chandrabhaga, V.P.Dhananjayan and wife Shanta Dhananjayan and similar other pairs gave a chance to the male dancer to represent Bharatanatyam in the tandava tone to set off the lasya contrast brought out by the female partner. Even today couples like Chennai’s Shijith and Parvati Nambiar and Ranjit and Vijna are very popular. But in most of these duet situations, the male dancer, in the past, would confine his role to presenting that part perceived as suiting the male half.

Gender bias is a perception emerging from conditioned minds due to historical and cultural reasons. Having watched innumerable male dancers, and observed the way the male body is able to adjust to the ‘araimandi’ (demi plie), central stylistic concern of Bharatanatyam and how strong hand and leg stretches bring out the clean geometry of lines in this form, I have always felt that the male body is made to adapt to the demands of the dance technique more easily. While the male role sits somewhat uneasily on the female torso (unless completely hidden from view and covered as in the Kathakali stree vesham), the more neutral male body lends itself to both male and female roles. The interpretative part is a matter of individual skill irrespective of gender.

Watching senior dancer and Guru A.Lakshmanaswamy presenting Seshadri’s varnam “Inta Chala Melane” set to music in Nalinakanthi ragam and Adi talam by Meera Seshadri, with the dancer’s male persona getting ironed out of existence while portraying the love-stricken Nayika imploring messengers like Shiva’s deer, snake and others to request Sundara Kapaleswara of Mayurapuri to desist from being indifferent, by responding to her love — the expressional finesse and improvisations round each statement in the lyric could well have been the pride of any female.

Praveen Kumar’s recital was, perhaps, the highlight of this year’s Music Academy festival. In line and profile of movement and excellent choice of items, in rhythmic exactitude, and choreographic uniqueness of the Veene Shesha Iyer’s Shanmukhapriya varnam ‘Devadideva Nataraja’, in utilising punctuated silences contrasting and accentuating impact of action-filled sequences, not to speak of the interpretative excellence of this dancer, Praveen was second to none. As the Dhrishta Nayika aware of his faults but unwilling to acknowledge them and trying to sweet-talk the Nayika who will have none of him, in the Javali ‘Taru maru lade veme’ the final touch of inverting the basket, he unsuccessfully tried to cover the Nayika’s head with, over his own head, was a delightful touch – showing a sense of humour with a hint of remorse.

Also from Bengaluru, Parshwanath Upadhye, who, lately is under the training of senior Chennai guru/performer Sudharani Raghupathy, would seem to have realised that skill in abhinaya is more than just spinning stories in a theatrical narrative. Interpretative dance demands in depth understanding of sahitya with improvisatory skills in weaving out subtle variations round each phrase and line. Witnessing his performance for the Music Academy festival, after having been treated enough to his physical agility as a Yoga expert, almost making a gymnastic marvel of his Bharatanatyam performances, one was apprehensive of his choice of a Tanjore quartet varnam like ‘Sami ninne Kori’, expounding the Nayika’s adoration for Brihadishwara. The way Parshwanath resisted falling prey to too much of rhythmic wizardry, and transcended boundaries of space, gender or time in his interpretation of sringar was most pleasing — rendering performer being a male, totally irrelevant. It was a case of the dancer becoming the dance.

To negate the persona by turning the body into a pure vehicle for communication or in other words transcending the body through the body language is great art – by male or female. Dancer has to be the genderless dance.