An invisible chapter of history comes to life

Both amusing and heart rending, the supercilious recruiter dances out the inducements of glory and money to the naive young men. 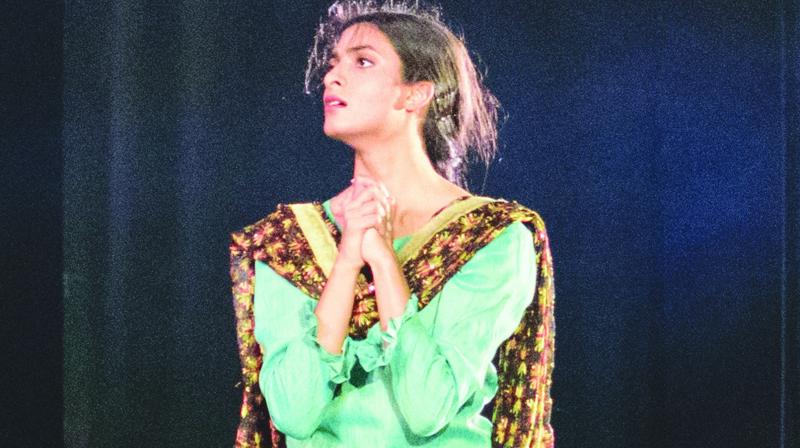 The story is a simple human story set in World War I.

The Troth — Usne Kaha Tha, produced by The Akademi, London under executive producer, Mira Kaushik, is just what the “cultural” doctor ordered. Every audience member, whether in India or the UK, comes out with a paradigm shift in awareness of Indo-British history as well as the aesthetic possibilities of transnational artists and choreography in dance-drama.

The story is a simple human story set in World War I. The classic Hindi short story Usne Kaha Tha (written in 1915 by Chandradhar Sharma Guleri) begins in rural Punjab and moves swiftly to the stark reality of trenches in Belgium where Indian soldiers basically served the Allied Forces as cannon fodder.

This largely invisible chapter of history comes to life through the intensely physical action of the dancers supported by authentic film clips from the British War Archives of training, fighting, living and dying in the sodden trenches. Unless one visits India Gate in New Delhi and takes a close look at the thousands of names inscribed on this First World War and Third Anglo-Afghan War memorial, Indian lives sacrificed are commonly unimagined.

The story begins with the evergreen kahani of a boy, smitten by a beautiful girl in his village who, while drawn to him, marries the suitable boy. Lehna Singh’s 1888 Amritsar line to Leena, “Are you bethrothed?” gets a yes answer on their third encounter and the long trailing silk scarf is the emblem of this engagement.

Without dwelling at length on the emotional impact on Lehna, we move swiftly to ahead the recruitment and eventual war call-up of Indians in Punjab that includes Lehna as well as Leena’s husband and son.

Both amusing and heart rending, the supercilious recruiter dances out the inducements of glory and money to the naive young men. The long legged twists and turns of Daniel Hay-Gordon who also later plays the Sergeant Major and Lt Sahib, communicate the patronizing and arrogant attitude of masterful manipulation.

We time and again have seen Western stories and themes interpreted though Indian dance genres but this was a path-breaking vision of an Indian reality interpreted in contemporary choreography and direction by award-winning choreographer Gary Clarke.

It was an interesting choice by the Akademi to commission one of the UK’s leading independent dance makers to work with a multi-national cast of Indian origin. This juxtaposition offered a clear canvas to paint an interpretation of the story read during Mira Kaushik’s pre-UK student days studying Hindi literature.  Having promoted Indian classical and contemporary dance throughout the UK for decades, the UK-India Year of Culture marking 70 years of Indian independence was the Akademi’s opportunity to marshal the international resources needed to mount a well-crafted production worthy of touring around India and the UK. The direction and choreography was informed by creative consultants that included National School of Drama, Delhi’s Professors Tripurari Sharma and Ashok Bhagat, poet and literary translator Amarjit Chanda, King’s College Reader Dr Santanu Das and the curator in the Research and Academic Access department at the National Army Museum in London, Jasdeep Singh.

The dancers included both those trained solely in contemporary dance as well as some with strong classical Indian dance backgrounds. Vidya Patel (Leela), a Kathak dancer from Birmingham was a BBC Young Dancer Finalist who brought a gazelle-like quality to the young Leena and tragic passion to the grown woman separated by war from her husband and son in spins of despair.

Subhash Viman Gorania (Lehna Singh) wide dance background began in hip-hop, moved to classical western dance and training in Bharatanatyam and Kathak. He definitely brought  his unorthodox and quirky edge to this performance. Deepraj Sing (Wazira), who graduated from the London Contemporary Dance School as the first Duke of York Scholar is known as an explorative urban improviser with beatboxing/vocal percussion skills, all well used as WW1 Punjabi soldier.

I would love to see more of the extensive archival films held by London’s National Army Museum, but the prohibitive costs of accessing them make me grateful that the generous sponsorship of two nations made it possible to see the memorable clips included in The Troth.

We have all seen well integrated audio-visual integration with live performance, but the centrality of the  film material combined with soldiers letters, Amrita Pritam poetry and translations put together by Josh Hawkins is superb, not to mention the lighting by multitalented Charles Webber tackling the almost impossible task creating excellent lighting on stage while still allowing full screen visibility.

The number of people who contributed creatively to make this all happen is almost over-whelming, from dramaturg Lou Cope  to composer Shri Sriram and a long list of an amazing production team who, after the Jaipur Literature Festival inaugural traveled to Delhi and on to Bhopal, Jabalpur, and Kurukshetra. The funders and partners obviously include the Arts Council England and British Council, ICCR and GOI Ministry of Culture and long list ranging from the LaLit Hotels, Air India, to Eastern Eyeand Vivechna Theater Group.

It’s difficult to understand how Amritsar, Chandigarh and other cities of Punjab let the opportunity to host this production slip away, but I hope that means a return tour in the future could be possible after these cities see what they missed.

It will be interesting to hear of the response of British audiences when this is presented in the coming months. I hope it will open new artistic and civil society conversations.

Sharon Lowen is a respected exponent of Odissi, Manipuri and Mayurbhanj and Seraikella Chau whose four-decade career in India was preceded by 17 years of modern dance and ballet in the US and an MA in dance from the University of Michigan. She can be  contacted at sharonlowen.workshop@gmail.com.