A Chennai-based space enthusiast has achieved an exceptional feat by discovering the debris of ISRO’s lost Lander. 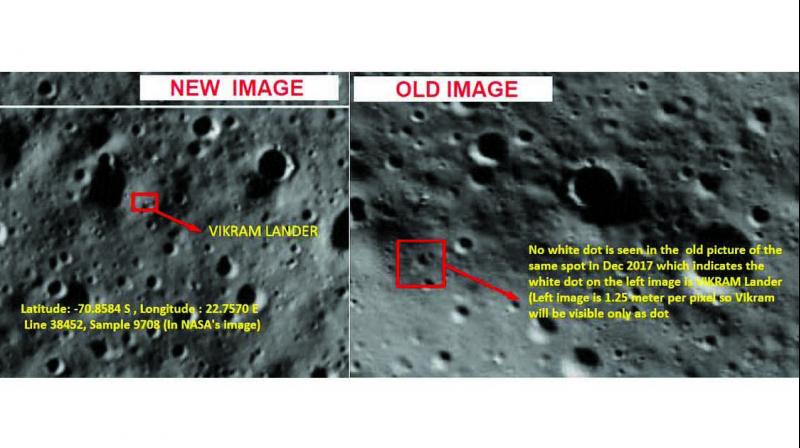 In September this year, when the Indian Space Research Organisation (ISRO) lost contact with the Vikram lander around 2.1 kilometres over the lunar surface, it was perceived as a setback to India’s maiden attempt to land a spacecraft on the moon.

In September this year, when the Indian Space Research Organisation (ISRO) lost contact with the Vikram lander around 2.1 kilometres over the lunar surface, it was perceived as a setback to India’s maiden attempt to land a spacecraft on the moon. But as the year draws to an end, 33-year-old techie and a self-professed space nerd Shanmuga Subramanian from Chennai has unravelled the mystery, finding the debris of Vikram Lander dispatched in Chandrayaan 2 on Tuesday.

“Being a mechanical engineer, I am crazy about rockets from my childhood and never missed watching a rocket launch on television until my college days. That hooked me in space exploration,” shares Subramanian, who has been credited by NASA for finding ISRO’s Vikram Lander on the moon’s surface after discovering the debris about 750 metres from the main crash site of the lander.

In September, the lander began its 15-minute autonomous descent, overcoming a hurdle of rough braking to go down from a height of 30 kilometres to around 2.1 kilometres. It landed on the moon and lost communication with the ground station. NASA credited Subramanian with the discovery of debris and sent him an email that his discovery had helped the Lunar Reconnaissance Orbiter Camera (LROC) team locate the site of primary impact. NASA has also released the images marking the debris that Subramanian discovered. “I don’t think Vikram lander would have made such an impact on the minds of Indians if it had landed successfully. I was in discussion with a lot of people about what malfunctioned in the process,” says the engineer.

Talking about the process, Subramanian shares that he would spend a lot of time searching through NASA’s pictures for nearly five days, every night after work. “There were a lot of false positives initially, but the Twitterati would correct me. And one of the Tweets lead me to a Reddit forum where they had the exact intended landing location and the path of Vikram,” he reveals. He adds that there was no data available about the path of Vikram lander. “I concluded that would have come from the North Pole as it crossed the North Pole of the Moon, and from ISRO’s live images I made out that it would have stopped short around 1 kilometre from the landing spot. It eventually led me to search around 2 square kilometres around the landing area,” explains the space enthusiast.

After searching around north of the landing spot, Subramanian found a tiny dot that he compared with previous LRO images of last nine years. “That confirmed that it would be the debris. I contacted NASA, and they took time to confirm the images as the surface was not illuminated. Without LRO’s data, this wouldn’t have been possible,” he shares.

Working as a technical architect at an IT firm in Chennai, Subramanian creates apps and websites in his spare time. For him, working on the self-inspired space mission was intended to inspire many other space enthusiasts. “I feel my finding should inspire thousands of others, who are not clearly involved in space exploration or are scientists, to feel that they can also do a lot as far as space is concerned,” the engineer says in conclusion.