Being an artist was always and is my passion, but work-wise I had to try something else to realise the value of my passion, says Julia Bliss. 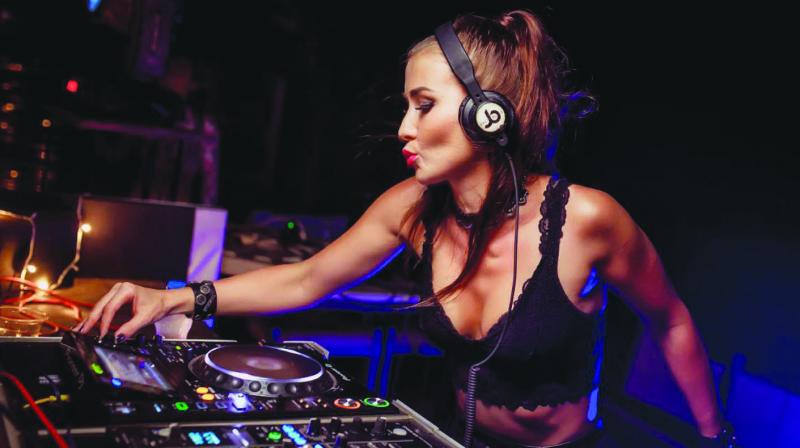 For us humans socialising, attending various get-togethers, going for parties, festivals, celebrations, events, etc. play a very important role. It not only helps us connect to the right people but also helps us bond with our dear ones at the same time allows us to unwind and relax our heart, mind and soul. I am sure you all will agree with me that this feeling of social fulfilment can only happen with superb music, uninhibited dancing and yummy food.

Music and dance is said to be the soul of any kind of merrymaking, no celebration is complete without it, of course, live music is something most people love but today recorded music has become very popular. When I talk of recorded music it is not just about playing one track after another on a soft or blaring speakers but it is a complete art.

An art of mixing the right songs and music, along with the durations of each tune and most importantly feeling the pulse of the celebration and playing only that kind of music that makes people go back with a relaxed mind and a memorable smile on the faces. Mind you it is no easy task to make hundreds and thousands of people have a great time at any gala event. But today let me make you meet one dazzling personality who literally has people eating out of hands at a party, she generates a blissful feeling at the top most party events world over. I am talking about one of the hottest disc jockey (DJ) of India, Julia Bliss.

Meeting Julia is an experience, not only because she is drop-dead gorgeous but because she is funny, intelligent, full of life and laughter. The best part comes when this Russian beauty in her heavy accent speaks in Hindi mixed with Marathi, Punjabi and Gujarati words, and people around cannot stop the riot she creates of the DJ console too.

I met this stunning girl in 2012 when I choreographed a song for her in her Bollywood film Ghost and thereafter what followed was a friendship that I will cherish for life. I totally agree with the people who call her one of the sexiest DJ’s today, with her charisma and style along with her incredible knowledge and intellect she is ruling the party scene not only in India but world over. At a recent high-voltage party where she had just shown her enigmatic art of DJing, I caught her at a silent spot and bombarded her with my questions, which she calmly answered.

Tell us about your beautiful country, Russia and the love affair it has with music and dance?
I am proud to say that I come from the largest country in the world, which covers the one-eighth of the earth’s inhabited land area and which spans 11 time zones and is indeed a fascinating place. Russian culture is considered one of the richest and most influential around the world.

The world of dance can never ever neglect the famous Russian ballet and the incredible ballerinas who are cultural symbols of my country and who have ruled the world of dance for decades. We are also wellknown for our unbelievable classical music, having produced some of the world’s best pianists, violinists and opera singers, not just that Russian literature is famous all over the world with writers like Tolstoy and Fyodor Dostoyevsky. For all the party lovers our Russian vodka is the best in the world. So when all of it is mixed and brought on to one platform what you get is the best experience of life.

What dance and music forms have you learnt and how did it influence you?
I spent six years of my life learning ballet, practising daily for four to five hours and more, and then moved on to learn jazz, modern and Russian traditional dance professionally. Later I also developed love for street and hip-hop and trained in that too. In addition to that I have taken training in piano and have studied “history of choreography” that helped me to keep in balance a theory and a practice. Music was and is an important part of my life, since the time I was born my parents kept listening to all kind of music genres and my house was my favourite place filled with happy tunes and positive vibes, until now I live in my music world.

What brought you to India? Tell me about your love for this country?
Being an artist was always and is my passion, but work-wise I had to try something else to realise the value of my passion. 2008 in Russian, I was working as a salesperson in the automobile industry; I like cars but it is not what I dreamed of. Daily at office I would imagine a huge stage and thousands of people watching my show. I would be dancing, playing music and acting, I saw myself up there and this thought has never left me. This dream made me leave my job and I came to the land of dreams — Mumbai.

I made my Bollywood debut with Bharat Shah-produced film Ghost by Puja Bedi, the film scored okay at the box office but my song Aaja Khatam Sabr Kar Le, which you choreographed Sandip, became a huge success and it got me many stage shows and performances. Later I went on to appear in many films such as Don 2 by Farhan Aktar, Tezz by Priyadarshan, Agent Vinod by Sriram Raghavan, Rock in Love by Deepka Tijori and even a south film Maattrraan.

At the same time I started playing music and my stage performances got more and more into demand. I was able to follow my dreams and I felt I found myself in India. Today India is my second home.

Why this transition from being a dancer, to an actor to a DJ?
In today’s world multitalented people get the most recognition. I decided to use all my skills for building up my artist profile. I had to learn Hindi as I am good with languages, my dance performances were going on, my first movie got released, but in all this I was somewhere missing my music.

I wanted to become a DJ from the age of 15 and I had a great opportunity to make my dream come true, today I am called top EDM DJ of India and it makes me feel complete. It took me 10 hard working years, in a stranger’s country, yes, it was and is very difficult to compete with local talents who know the vibe and culture and the language, but I believe nothing is impossible! Where is wish, there is a will.

What is the common connect you feel is there between dance, films and DJing?
Music is one from of art that unites us all, be it a Bollywood song or an EDM track at a festival. Music allows us to express ourselves, dancing on the film set or the festival grounds, music is its complete and bang-on answer.

Acting, dancing and DJing. Now what are you future plans?
My agency, Elements Inc, has always been supporting me with dance events and shows and now that my artist profile is complete, I wish to balance my opportunities to perform in every way. DJ-wise, I will be performing at the biggest music festival in Asia — Sunburn 2018 — main stage, on December 29 and many such mega events next year too. In the acting front I am currently shooting with Jainendra Baxi for his next film which will see me in a sensational role.

It won’t be wrong if I say that Julia Bliss is one person who actually makes people dance to her tunes, in her impeccable style she ended her talk about her incredible journey from the streets of Russia to the lanes of India saying: “If Russia is my janambhoomi (the land where one is born) then India is my karmabhoomi (the land where one works).” Today with this story I wish my dear friend all the love and happiness and pray that may this bliss never fade.