Ahead of India Bike Week, bikers from the city are revving up to celebrate the country’s growing motorcycle culture. 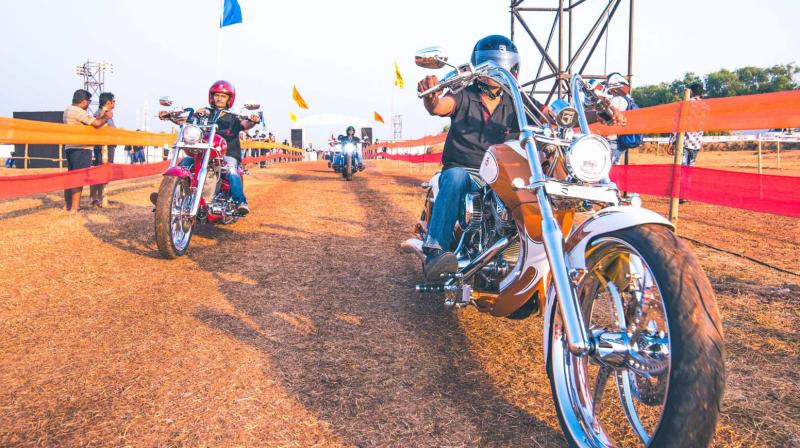 The festival will have around 280 biking clubs from across India and Asia, and over 130 exhibitors from the motorcycling world.

The 6th edition of Asia’s largest biking festival, the India Bike Week (IBW), is just around the corner and bike enthusiasts from the city are all geared up to hit the road. Inaugurated in 2013, the upcoming edition starting December 6 will see over 4500 bikers from the city, making thier way towards the venue.

Spread over 10 acres, the two-day festival will not only have bikers riding from different parts of the nation but will also house some of the greatest names in bike design and manufacturer, the rarest bikes, accessory shopping, training academies, track racing and more.

The festival also comprises the India Stunt Championship and the Big Trip Travel Session, during which legends in the biking world will share their tales of grit and endurance. One such bike enthusiast Debasshish Ghosh, the first rider from Indian to have travelled 36 countries in nine months covering 65,000 kilometers in one stretch, will be holding an interactive session with the biker community sharing his riding adventures.

“People are surprised to see an Indian on a bike traveling across the globe. Surprisingly, few borders have not seen an Indian passport before. At Nicaragua border, the people clicked the picture of my passport; that is how surprised they were,” shares the Goregaon resident.

Ghosh promises to shares interesting stories from his travel as well as throw some light on how Indians are received and how to prepare for such rides. “One will be surprised by how people simply shower their love on you. In Ecuador, there was a lady who watched my video on Youtube. She rode 450 km with her son to receive me. They hosted me and it felt like I was her son,” recalls the businessman, who was inspired by the British series Long Way Round to embark on the expedition.

The festival will also have around 280 biking clubs from across India and Asia, and over 130 exhibitors from the motorcycling world. Saurabh Shirke and Jitesh Kotian of Fat Head Garage, who specialise in modifying motorcycle, have worked on a 2012 model of Harley-Davidson Sportster Superlow that will be put on display at the festival.

“It was a stock bike but the owner wanted it to be between a scrambler and a flat tracker. A flat tracker is the American way of racing where they go on a round track leaning the bike or counter staring the bike. The client brought good suspension set-ups and tyres, which has completely changed the bike and I think people will like it,” says Shirke who works around the frame of a motorcycle rather than changing it. From researching to putting together the bike, the entire process took the duo over 20 days.

The IBW will also see racing taking place for the first time at the Enduro Hill Climb and Flat Track Trials Circuit. Bandra biker, Ogden Fernandes, who took to biking after using it purely for commuting purposes is elated about the festival. For him and his bunch of seven friends, all regulars, start preparing and clearing their schedules two months in advance.

For this year’s IBW, Fernandes and his group will be riding from Mumbai to Goa, and are in talk with local bikers from Goa to discover better routes. “We invest a lot of time in understanding the route to take. Going via Amboli Ghat Waterfall is scenic, but we might take the Chorla Ghat as it has twists and turns, which the bikers like,” he smiles. Most importantly, they are also paying attention to their biking gear and conditions. “We have Bluetooth intercoms connected in the helmet, through which we keep each other informed,” adds the biker.

Fernandes, who is also a social media influencer, will be holding a content creators meet with the biker community. “Biking culture is at an early stage in India, but it has made a big leap forward in the last two-three years. Earlier, when someone posted a picture of themselves riding a bike without a helmet, they were considered cool. But if someone does that today, they will be bashed. So it is moving in a safer direction,” he explains.

Echoing his opinion, Ghosh hopes to see the biker community grow, and is thrilled that initiatives like IBW are coming to fore. “It is bringing Indian bikers together and getting the community recognised and motorcycling as a sport and an adventure, when earlier, a motorcycle was restricted only to commuting.” he concludes.