Under initiative by Kailash Satyarthi Children’s Foundation (KSCF), children marched across the narrow lanes and by-lanes of Sanjay Camp. 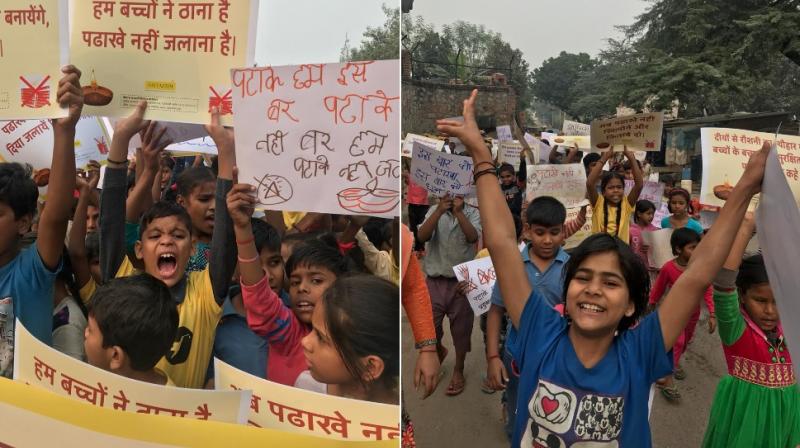 Foundation has been mobilizing and training kids over last many weeks, ahead of Diwali to spread awareness on harmful impact of fire crackers on health of children, adults and environment.

New Delhi: Hundreds of children here have demanded a complete ban on the use of firecrackers to check air and sound pollution during Diwali and other festivities across the country.

Amid chants of “Hum Bacchon Ne Thana Hai Patakhe Nhi Chalana Hai”  and “Patakhe Lena Band Karo Pradushan kam Karo”, mostly school children not only called for banning firecrackers, which would further spoil air quality, even as  they asked the authorities to restrict usage of cars and other polluting vehicles.

Under an initiative by Kailash Satyarthi Children’s Foundation (KSCF), founded by Nobel Peace Laureate Kailash Satyarthi, children marched across the narrow lanes and by-lanes of Sanjay Camp, a slum cluster in the vicinity of Chanakyapuri embassy area in the national capital. KSCF volunteers amply supported by children of American School, who also marched with them helped them to design posters and craft slogans.

Eight year old Gudia, a student of Class 2 of a government school, said, “The cracker when burst releases poisonous gases in the air. We also feel smell in the toxic air, a day after Diwali it becomes difficult to breath.” She is also concerned about the health of animals and birds. “The loud sound of the fire crackers is very scary for birds and dogs,” she further added.

The foundation has been mobilizing and training the kids over the last many weeks, ahead of Diwali to spread awareness on the harmful impact of fire crackers on health of children, adults and environment.

Diksha, 7, who studies in Sanskriti School, says that as a result of pollution and fire crackers it has become very difficult to breathe. “We feel suffocated. Instead of these crackers, we could use non-polluting green crackers.” She has been told about the green crackers at the KSCF workshops running in the area.

Ten year-old Vanshika, simultaneously blames vehicular pollution too, and says that along with crackers “there should also be a ban on cars, which is one of the reasons for pollution in the city.” The little girl cautions all that if pollution is not checked it would lead to end of mother Earth and the entire environment.

When asked how to celebrate Diwali, these children say that we should light our homes using earthen lamps and pots along with coloured lights, available in the market.

Eleven-year-old Sakshi has suggested a solution to the alternative of using fire crackers, saying that we should burst balloons instead. KSCF Programme Advisor Roopika Saran who has been at the centre stage of this initiative said, “We mobilized the children through our strong relationship with the community since our social workers interact with the kids on a daily basis. The Rights for Children club from the American Embassy School had done a session to prepare the children for this rally.”

“Through the rally, we raised awareness about how child labour is prevalent in the firecracker industry. The kids were shocked to learn about that. They are determined to put a stop to firecrackers in Sanjay Camp. Once they realise that their voices are strong enough to make change, amazing things can happen,” Saran further added.