Kali Puja, celebrated on the eve of Diwali or on Diwali night, was introduced in Bengal during the 18th century. 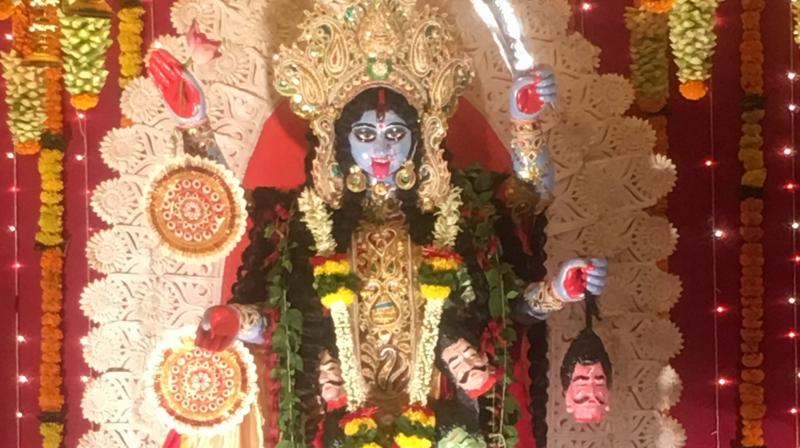 Goddess Kali is worshipped for the purpose of destroying all evil that is in the outside world and the world within us.

Festival season is just about beginning and the Bengali community celebrated their Laxmi Puja last week, before the rest of the country. Kajogiri or Lakshmi Puja followed by Kali Puja, follows Durga Puja in rapid succession.

Jayanta Kumar Basu, President- Bombay Durga Bari Samiti says, “Kali Puja coincides with the popular festival of Deepavali, and is celebrated with equal enthusiasm, mainly by people from the eastern parts of India. We at Bombay Durga Bari Samiti also celebrate Laxmi Puja with a great deal of verve and vigour, including serving pure vegetarian bhog after the evening aarti to devotees and the underprivileged.

“Lakshmi Puja is celebrated by the Bengali community on Kojagori Purnima night, i.e. the full moon night in the month of Aswin (Bengali calendar), barely 4 days after Durga Puja or Dusshera” elaborates Smt. Susmita Mitra, Chairperson- Bombay Durga Bari Samiti. In other parts of India, Lakshmi Puja is celebrated on a day before or on Diwali night, i.e amavasya. Traditionally it is believed that Lakshmi, the goddess of wealth, light and prosperity visits every household on this full moon night and blesses them with the promise of wealth, fortune and good luck.

Kojagori Purnima also coincides with Navanna or the harvesting festival or season which commences from this day when the harvested grains are consumed in households. Just as in other parts of India where Diwali is celebrated by lighting Diyas,  Lakshmi Puja or Kojagori Purnima is celebrated with lighting of Diyas to show Ma Lakshmi the path to bring wealth and prosperity home! Legend says Goddess Lakshmi visits households asking Ko Jagarti or who is awake, and those who stay awake are blessed with good fortune, prosperity and wealth. There are countless stories and legends about Lakshmi Puja but that makes for another story another time.

Kali Puja, celebrated on the eve of Diwali or on Diwali night, was introduced in Bengal during the 18th century. Along with Durga Puja, now - Kali Puja is the biggest goddess festival in Bengal. Goddess Kali is worshipped for the purpose of destroying all evil that is in the outside world and the world within us. Legend says that two asuras, Shambhu and Nishambhu, grew all powerful and disturbed the peace in heaven. To restore peace in heaven and on earth, the gods created Kali out of Durga's forehead. Kali, with her two escorts: Dakini and Jagini; set out to end the war by killing the demons. After slaughtering all the demons, she made a garland of slain demon heads and wore it around her neck. But in her mission, she lost control and started killing anyone who came in her way. To put an end to this carnage, Lord Shiva devised a plan to come in between the rampaging path of Kali. It's when Kali unknowingly stepped on him that she recovered her senses. This is the reason why the tongue of Kali is depicted as out.

Puja from 9pm and Bhog (vegetarian) will be served to one and all from 11pm onwards.