Mumbai’s Naitik Nagda is the first drummer to introduce a 360-degree wheel of drumming in India and second in the world after Ben Walsh. 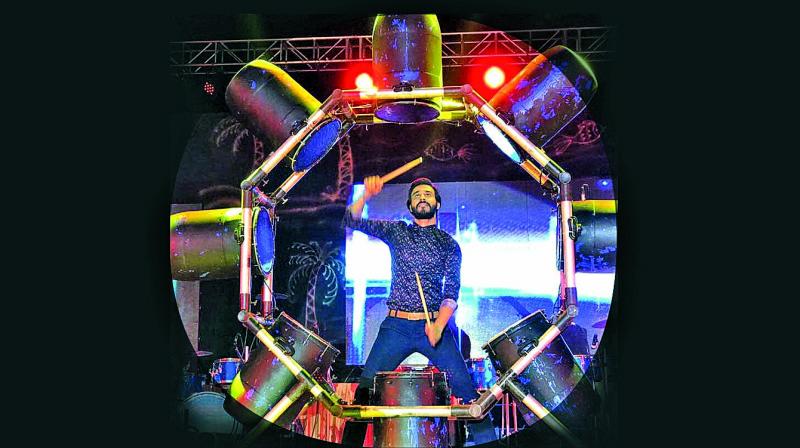 At a young age when kids barely manage to hold their school bags, Naitik managed to hold drumsticks with his tiny fingers and would play them to rhythms.

We all have heard of the Dandiya Queen – a singer who makes you groove to traditional garba songs and brightens your evenings with a pinch of tradition. Although the names are very few — including Falguni Pathak, who has been ruling garba stages for years across the country — but the last couple of years have seen the discovery of a Dandiya King as well. Naitik Nagda is the first drummer to introduce a 360-degree wheel of drumming in Indian and second in the world after Australian percussionist Ben Walsh.

“It approximately requires two hours to set up the drums. But the high beats of this kind of drum set up, enthral the audiences and set the Navratri stages on fire. This festival is incomplete without drums or any other instrument,” says Naitik, who spoke to us amidst his crazy work schedule.

Beating eight drums to a mix of of Electronic Dance Music (EDM) with folksy dhols placed in a circular shape on a big wheel at the height of 13 feet, Naitik’s drumming style leaves a lasting impression. Recollecting his passion for music and drums, he shares that drumming has been his passion since childhood and had started playing at the age of seven. “Music has been a god-sent gift to me, and as a child, I used to create my own music pieces,” he recalls.

At a young age when kids barely manage to hold their school bags, Naitik managed to hold drumsticks with his tiny fingers and would play them to rhythms. As a child artist, the little drummer also earned a show titled Little Wonders with Bollywood’s veteran music duo Kalyanji-Anandji. Naitik never looked back since and took up drumming full time. “Since then, drums became close to me and they are part of my life now,” he confesses.

Although drumbeats have an essence of its own, and it doesn’t let you stand still if you are around, Naitik intentionally chases high range beats when he plays. According to him, the way he plays on high beats makes a beautiful show for the audiences and gives him opportunity to expand his artistic horizons at the same time. “I look forward to chasing beats on the instrument, and do a lot of experiments with high beats and ranges because that’s always worthwhile watching for audiences,” says Naitik and adds that only when he can come out of his comfort zone, can he become unstoppable.

Juggling between two events a day, one at Modella Mills Compound in Thane and the other at The Lalit’s midnight Garba, Naitik sources his energy from the music and the quest to entertain the audience is what makes him feel energetic. “Music is my power booster and stress reliever. Be it single or multiple venues, the fun of performing and the passion of giving my best to the audiences gives me energy,” muses the artist.

Apart from Navratri, Naitik also plays at various corporate and wedding events, and he reveals that the environment of music differs according to the occasion. He is a drummer, music director, singer, a gig play artist, and also a winner of MTV’s Rock On music show. Along with his single songs with some big music labels, Naitik had performed with many mainstream Bollywood singers like Farhan Akhtar, Kailash Kher, and Hard Kaur, among others.

“It has been amazing so far. Working with such talented and versatile artists is always fun. They are very organized and ideation-oriented. And I strongly believe these traits always lead you to the path of success,” he signs off.