Video of Dave and his 4-year-old daughter Claire singing the title track from Tarzan has left the internet mushy with 16 million views. 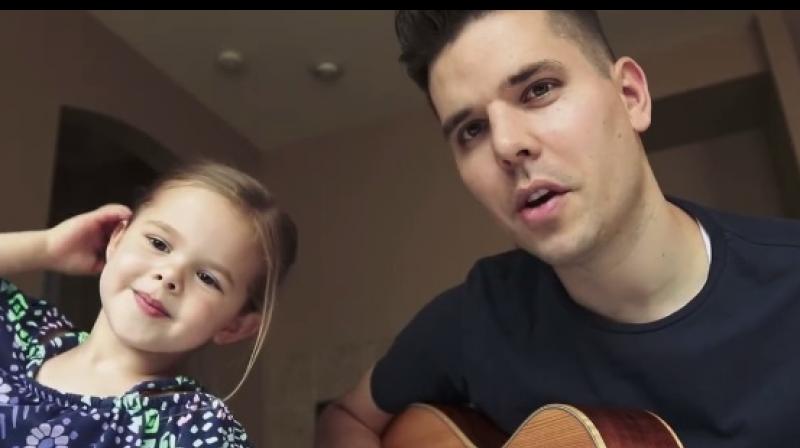 The internet has gone crazy since the video appeared, with many commenting on the child’s singing abilities. (Photo: Facebook)

Young Claire Ryann is not new to music or videos. 4-year-old Claire and her father Dave are known to post heart warming music videos based on Disney themes that have left the internet mushy multiple times. Claire's parents are Dave and Ashley Crosby, college sweethearts who married when Dave was 22 and Ashley was two days shy of her 19th birthday. Seven years later, the couple is based in Seattle, Washington where they live with both Claire and their son, Carson.

And now the daughter-father duo has come up with a new video that hits all the right spots. From Claire beautifully starting "You'll Be In My Heart" from Tarzan to her father Dave joining in with a guitar in tow, the video makes for some beautiful watch.

The way young Claire eases into her father’s side as they ease into the 1999 Phil Collin’s composition from Tarzan is a beautiful acoustic rendition.

Interestingly, an interview with the website parents.com saw Dave say that Claire learned to talk at a super young age and they noticed that she could carry a pitch. A little later young Claire started slamming her hands on their little keyboard in the living room and started hitting the same note over and over, and then she began to sing the exact same note.

The internet has gone crazy since the video appeared, with many commenting on the child’s singing abilities.

One Sharon Hart commented, “You two bless me so much every time I see one of your videos. Dave....you are such an awesome dad....you're building memories with Claire that will last throughout her life.”

There is a point in the video when the little Claire can be seen yawning in the middle of the song, and that too seems to have garnered a lot of attention.

Ezola Marie Stanley commented, “I love the yawn, she always seems so relaxed not pressured by her parents to perform so it comes across so touching and pure just the innocence of a lil girl and her daddy. Priceless”

Check out the video of the beautiful rendition below