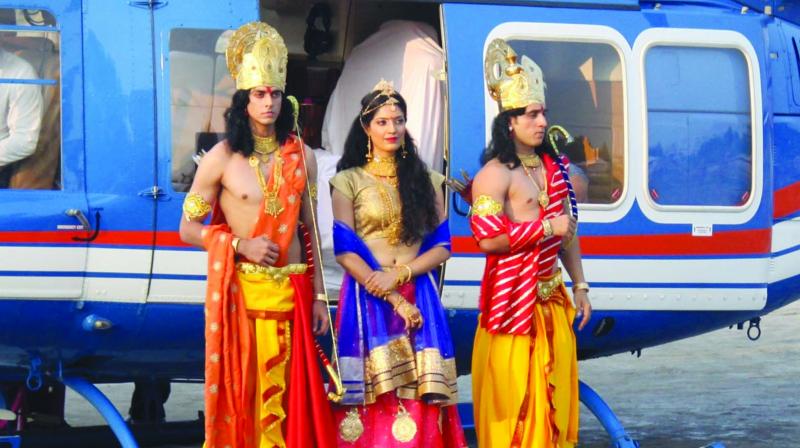 Artistes dressed up as Lord Ram, Sita and Lakshman arrive by a chopper decorated as the mythological 'Pushpak Viman' for the event. Photograph: Nand Kumar/ PTI Photo

From time to time, many an Indian politician hits the headlines for making bizarre statements.  And one theme that has been triggering a slew of weird opinion of late is the link between Hinduism and science. Recently, Uttar Pradesh deputy chief minister Dinesh Sharma said the medical procedure of test tube babies existed during the era of Ramayana. This came a day after he equated the mythological character of Narada to Google. This is not the first time that Indian mythology has been equated with modern-day science.

This new attempt to justify religion through science is a  recent phenomenon, says eminent sociologist Shiv Vishwanathan. “If we look at the history of science, religion provided the cosmology through which science developed. In fact, there was hardly any contradiction between religion and science, except for Christianity, particularly Catholic religion. So one has to be very careful about the whole debate around science and religion. It was artificially created in the 19th century,” he says.

He adds, “Some political leaders from BJP are now taking these things literally. That is adding to illiteracy. It is not so much an act of faith that can be open-ended. It’s an act of cooked up history. It creates fundamentalism. You would be able to believe in science and at the same time say that ancient India anticipated many of these things. But what this does is that when there is a critical debate on science and technology. They have nothing to say. Biotechnology — nothing to say, Nuclear energy — nothing to say, so it has become a cover for a type of debate on science and technology. But why do they do it? It is the illiterate that tries to use the past to confuse us about the future.”

The need for understanding  science and technology can be deterred due to this, he feels. “It will also distort what is going to happen in the future.”

Rationalist Nikhil Joshi opines that statements like these made by an isolated individual should be laughed off. “But the problem is that such statements are being made by people who enjoy political power in our country. The real concern is people getting swayed by these statements instead of paying attention to their own secular concerns. For example, they will want petrol to be cheaper, but they will purchase that petrol to burn a bus. Politicians have a limited power to influence the world. Distortion of thought could continue for five to 10 years, but hopefully, in the long run, common sense will prevail. The realisation has to come from the people,” he says.

The whole idea rests on the commentators wanting the approval of modern society, science and technology. Nikhil adds, “So they try to explain their beliefs in terms of scientific paradigms. In a way they are accepting that science is what truly runs the world. But they are trying to assert that their culture and heritage is not inferior to the modern world. Their desire to say this is primarily coming from an inferiority complex because they feel that they are losing ground. Science explains everything, but they want their culture to survive too. The way it will survive is by insisting that Ganesha was an example of plastic surgery. They wish to use science to authorise their beliefs. If they truly believe in God, why do they need science to explain it? If you are truly faithful, you don’t need science to prove that your God is highly scientifically evolved.”

Politician Sudheendra Kulkarni finds such statements unfortunate and objectionable. “Such baseless and irrational glorification of our tradition undermines the scientific temper so necessary for building a modern society. Our ancient knowledge traditions are certainly rich in various streams of knowledge, including scientific and technological knowledge. However, no claim should be made about the achievements of our ancient traditions without sound evidence or justification. In other words, even the ancient knowledge traditions should be subjected to scientific scrutiny. Unfortunately, many highly placed political individuals have been making claims without scientific validation,” he says.

With inputs from Priyanka Chandani