Facing the heat of shoes and slaps

Recently the Delhi Chief Minister Arvind Kejriwal was slapped by a man during a roadshow. 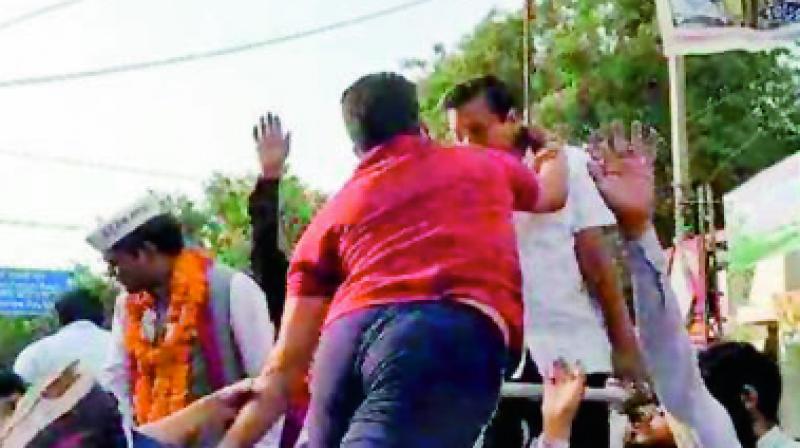 A video of the alleged incident appeared on some websites.

Recently Shatrughan Sinha realised his slip-of-the tongue when he said “from Mahatma Gandhi to Muhammad Ali Jinnah.”, when he actually wanted to say Maulana Azad! Let’s recount similar slips from the past.

1. The Bhartiya Janashakti Party president slapped her district general secretary Anil Rai, believed to be close to party’s breakaway faction. In November 2011, when the Government decided to allow 51 per cent FDI in multi-brand retail and 100 per cent in single brand retail, she threatened Walmart.

2. This Bollywood singer whose father, Ajmer Singh Chandan was an amateur wrestler and a classical musician, was booked for allegedly slapping a doctor at a live concert in Delhi. A case of causing hurt and wrongful restraint was registered by Delhi Police. A video of the alleged incident appeared on some websites.

3. He was Roman Emperor from BC 337 to BC 361. His reign saw constant warfare against the Sasanian Empire and Germanic people. He was giving a speech from a small hill to a group of Limigantes to ask for their loyalty, when he was hit by a shoe thrown by one of them. The thrower shouted ‘Marha, marha!’ in a “signal of war.”

4. She was a sales director in the Dubai-based TECOM Investments, and a co-owner of the India-based Rendezvous Sports World (RSW), a cricket franchise in the IPL.  In 2012, she repeatedly swatted away the hands of a man allegedly misbehaving with her during a jostle at the airport.

5. This top brass Indian politician’s grandfather was the founder of Annamalai University and United India Insurance Company Ltd. He was shoed by Jarnail Singh, a Sikh journalist of Dainik Jagaran. He was asked a question by Jarnail Singh on the CBI’s clean chit to Congress leader Jagdish Tytler on the 1984 anti-Sikh riots.