While Nishu, son of a taxi driver, is expected to help earn moolah for the household, Amir’s talent is seen as ‘haram’ by his orthodox uncle. 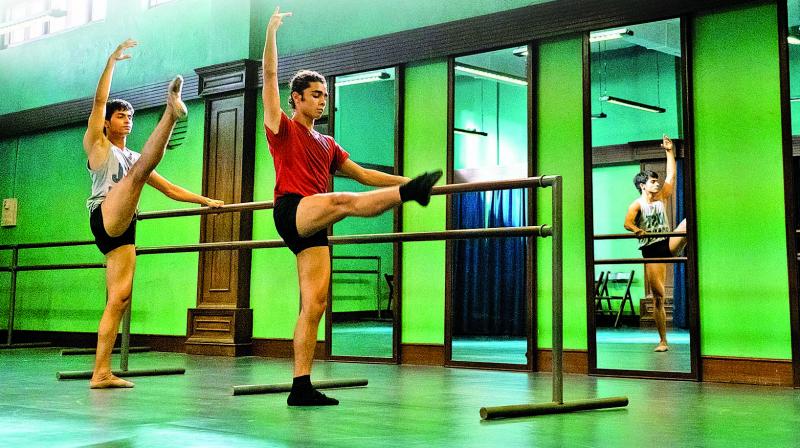 As the two teenagers navigate through these seemingly insurmountable roadblocks, what prevails throughout is their ability to co-exist – an allegory for the cosmopolitan spirit of Mumbai that Sooni admires.

In a freewheeling chat with us, Sooni Taraporewala talks about how her latest movie Yeh Ballet captures the essence of Mumbai, breaks stereotypes, and how it has given her a second lease of life.

Among the Maximum City’s most loyal chroniclers, Sooni Taraporevala’s name is set in stone, as the homegrown screenwriter, filmmaker and photographer who continues to find Mumbai as her muse. From Mira Nair’s maiden feature film Salaam Bombay!, which was nominated for the Academy Award for Best Foreign Language Film in 1988, to her latest directorial venture Netflix’s Yeh Ballet, Sooni has a penchant to take stories from the gullies to global platforms.

Inspired by a true story, Yeh Ballet is a tale of how two male ballet dancers—Nishu and Asif— from economically underprivileged backgrounds make it big with the help of their eccentric albeit supportive ballet trainer. Based on the lives of dancers Manish Chauhan, who plays a fictionalised version of himself in the film, and Amiruddin Shah, and their ballet instructor Yehuda Maor, Sooni first came across their story in 2017 when she made a small VR documentary film on the trio. However, having already made a film, Sooni had struck a personal connection with the boys and she knew that the true justice to their story of hope and determination in the face of hardships would happen only in a proper feature-length film.

“I learnt ballet as a kid and I know how rare it is to find boys who do ballet and so extremely well. And that’s what these boys from economically deprived backgrounds who have not even grown up listening to classical music were doing. I wanted to celebrate their achievement,” gushes the director, revealing when the ace producer Siddharth Roy Kapur offered to produce the film, there’s no going back for her.

Through the course of the movie, viewers see Nishu and Asif traversing through the bylanes of Worli koliwada and slum, where the two characters are from, as they battle financial and religious obstacles in their way. While Nishu, son of a taxi driver, is expected to help earn moolah for the household, Amir’s talent is seen as ‘haram’ by his orthodox uncle. As the two teenagers navigate through these seemingly insurmountable roadblocks, what prevails throughout is their ability to co-exist – an allegory for the cosmopolitan spirit of Mumbai that Sooni admires. “Nishu’s house, which is shown in the film, was a real location where a small Hindu temple is next to a parish and a masjid. And that’s the city I have grown up in, and that’s what I want to reflect and project. This is the city where, traditionally, people from different communities and faith have been living together harmoniously – this is the heart of the city, this is the soul of the city that I wanted to reflect,” says Sooni, who used secularism as one of the recurrent themes in the movie.

However, as an avid observer of her surroundings, Sooni also did not shy away from pulling the earlobes of the authorities, as she incorporated some passing references to the controversial civic projects. From a commentary on ubiquitous shafts dug for the Metro to the impending dangers of relocation faced by the Worli Koliwada community, owing to the coastal road project, Yeh Ballet captures the good, the bad and the ugly of the city. “All these dialogues and other contemporary bits came from me wanting to reflect the reality of the city. I have been against the coastal road for a long time, and we have been fighting against it. So when we were shooting in Worli Koliwada, where people are actively fighting against the coastal road, how could I have not mentioned one of their most pressing issues,” she elaborates.

In addition to breaking the stereotypes that ballet is for the elite classes, the two subjects of the film, and subsequently, the two protagonists, quash the feminine attribute that is often associated with the dance form. “I have never subscribed that ballet is for women because when I was growing up, one of the sex symbols was ballet dancer Mikhail Baryshnikov. You could not get more handsome than him,” laughs the filmmaker. “People don’t realise how hard the dance form is. You have to be as fit like a super sports star but unlike a super sports star, you can’t make all kinds of faces. In ballet, you have to do really tough things with a smile on the face. These stereotypes might have been broken for other people,” she adds.

What’s more nostalgic about her latest film is that it marks the independent filmmaker’s return on the director’s seat after her 2008 comedy-drama about Parsi households Little Zizou. With the advent of OTT platforms in the last five years, and their subsequent hunt for content has resulted in some of the most creative and independent storytellers to find their audience. Hence calling streaming website Netflix her life saviour, Sooni concludes, “We are still very star-driven in our country. You cannot demand any kind of budget if you don’t have stars in your film. And Yeh Ballet is a very large film with dance and music, and all of that takes money. So you need people to support these kinds of cinema. Therefore, for independent filmmakers like me, streaming platforms are extremely important.”