Coronavirus triggers people around the world to come up with alternative methods for traditional greetings. 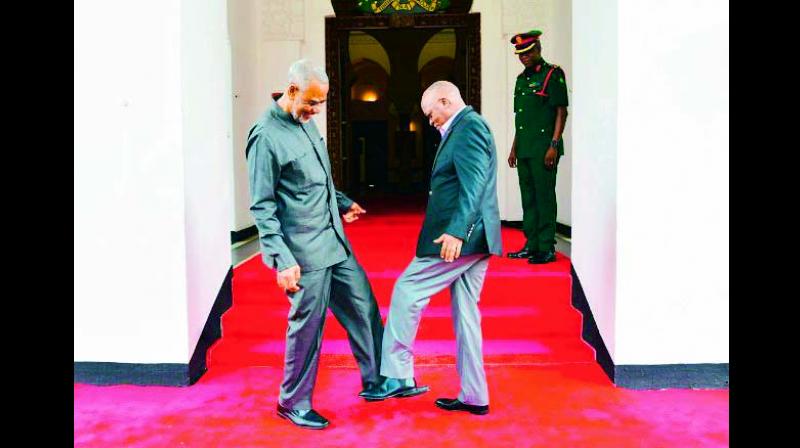 A couple of days ago, German Interior Minister Horst Seehofer committed what could have, at any other time in history been regarded as the ultimate faux pas, by rejecting a handshake from his head of State, Chancellor Angela Merkel  — but ended up being praised for his stand.

French Health Minister Olivier Véran recently made an announcement asking his compatriots to go easy on La Bise, the custom of greeting people with a kiss or more on both cheeks.

While these leaders are spearheading a change from their own long-held traditions, others are advocating the adoption of traditions of other countries, or inventing new customs — all because of the coronavirus.

Physical contact between humans is mainly responsible for the quick proliferation of the coronavirus, which has affected thousands of people all across the world, leaving upward of 3,000 dead. Greeting traditions in Western countries, which have now become universal, involve touching and kissing. Handshakes, air kisses accompanied by hugs, pecks on the cheeks, high-fives etc. are ways in which society celebrates, congratulates and welcomes. But at this time when the world is trying to limit the spread of the virus, these are high-risk actions.

Say it with folded hands
And so, the Indian namaste, the dignified and graceful way of acknowledging the presence of the divine in others, has come into its own. In fact, Israeli Prime Minister Benjamin Netanyahu  has encouraged his countrymen to adopt the Indian way of greeting, in place of the customary handshake.

Travel and Fine Dining Etiquette expert Suneetha  Sodhi Kanga says that namaste is the best form of greeting, especially in the present context, as it completely avoids physical contact with the other person. “Not just during times of the coronavirus; whenever you fall sick, it is always safe to avoid physical contact (to prevent virus transmission) and instead, greet people with a smile,” she adds.

Senior Indian politicians Ghulam Nabi Azad and Jairam Ramesh were recently spotted welcoming each other with a Namaskar instead of a handshake.

Prof Arjuna de Silva, former member of the Sri Lanka Cricket (SLC) medical panel suggested that the country’s cricket players use Ayubowan (similar to Namaste), as a greeting during their current series against England.

A video of two people wearing face masks (in China), quickly tapping their feet in greeting has been going viral and the action has been dubbed ‘footshake’.

Elbow-Fist bump
Nebraska Governor Pete Ricketts has been encouraging people to use ‘elbow bumps’ and demonstrated it in a video. The National Basketball Association (NBA) too has recommended that players use the fist bump to celebrate their highpoints during matches.