It’s a 4K blue chip film shot with the first of its kind technology, and it is an ode to the state. 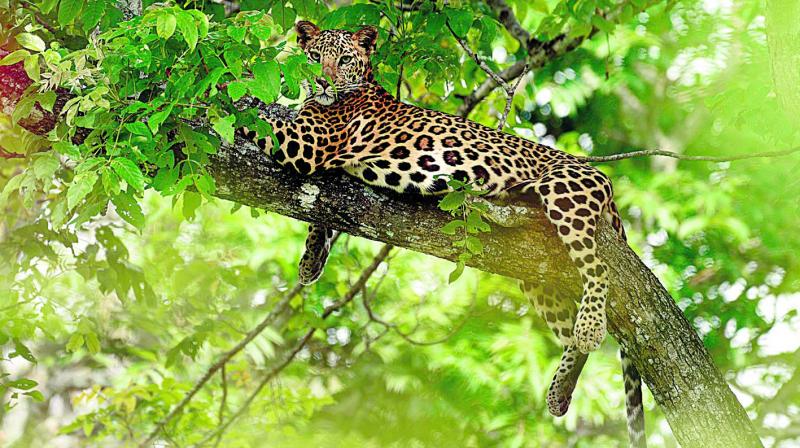 It’s been four years in the making with 400 hours of exquisite footage. On March 3, World Wildlife Day, this labour of love Wild Karnataka, a spectacular hour-long film was released, leaving many awestruck by its brilliant captures. It opens up a world of wildlife and bio diversity that Karnataka has to offer, and gives one peeks into the rich habitats and fauna of our land. It’s surreal in that it looks like the Amazon rain forest in some shots! The fact that the film makers collaborated with the forest department opened up new untouched, unexplored and unknown vistas for the artistic lens.

The motley crew came together under the dedicated eagle eyes of award-winning wildlife photographers and film-makers Amoghavarsha JS and Kalyan Varma. It’s been narrated by renowned wildlife historian and legend Sir David Attenborough, a compelling feat in itself! And with it, the beauty of Karnataka, and India is put on the global map.

This beautiful film encapsulates a land that has nurtured a plethora of wildlife, and many bio diverse characteristics. The crew calls it a 4K Blue Chip nature film. Accomplished and ingenious, it is on par with international wildlife documentaries.

Adding to their wealth of experience was Vijay Mohan Raj, an IFS officer, who is chief conservator of forests, and experienced naturalist Sarath Champati. “We went from the Western Ghats to the rain forests to the arid regions, with a massive collaboration with the forest department. We unearthed wildlife that people are not aware of. There will be two versions of the film, the English version which will either be on streaming sites or on broadcast media, and the Kannada version which we hope to screen at schools, colleges and road shows to spread awareness about a bio diverse Karnataka,” explains Amoghavarsha who left his career as a software engineer to follow his passion, and has earlier worked with National Geographic and BBC.

His work on climate change was showcased at the United Nations Climate Change Conference (Paris) and at the UN general assembly (New York) amidst world leaders. His eye for detail can be seen in the beautiful captures. “I would say that every sequence is new, or has been shot in a way that has never been done before. What will surprise people is the richness of our state. For instance, we have such beautiful coral reefs, and I am thankful we could film such lesser known equally beautiful aspects of the state. Even the arid and dry regions like Hampi have such abundant bio diversity.”

For Kalyan Varma, it was a fruition of a dream. The recipient of BBC Wildlife Photographer of the Year Award and Carl Ziess Wildlife Conservation Award reveals that the focus was to highlight different habitats in Karnataka, and lesser known species. “Everyone knows that we have tigers, leopards and elephants (which are also shown in the film), yet we wanted to go beyond that, to focus on the other animals and species. We spent a day with David Attenborough in London, and even at 93 years of age, he has the enthusiasm of a 10-year-old. It was amazing as I got into wildlife 20 years ago, inspired by his work so it was a dream come true,” says Kalyan Varma who is going to take a breather after this intense four year project and then move on to a wildlife project for Netflix, and another one with Sir David Attenborough for BBC.

If the Wild Karnataka visuals are a revelation, the music too resonates with its classical strains and fusion courtesy Grammy award-winner Ricky Kej. Welcome notes of fusion, raagas with gentle thaka-din-dins spring the creatures into action, as the crew unobtrusively shot images that are breathtaking — a monkey climbing up a rock tail high up in the air, a swan in flight, a tiger prowling in the thick forest, a leopard clawing its way onto a bark, the fury of a waterfall or the gentle rise and wall of a frog’s breath. “I have dedicated my life and music to raising environmental consciousness and hence, composing music for this epic masterpiece made by the best film makers in the world... with the legend himself Sir David Attenborough narrating it felt like the perfect fit. I am extremely fortunate and privileged that the team trusted me with their vision and gave me a free hand to sonically represent Wild Karnataka. This one is really close to my heart.”

IFS officer Vijay Mohan Raj, knew the lay of the land. Naturalist Sarath Champati who has earlier travelled across seven continents to study bio diversity and an able team (Amogh and Kalyan had 20-odd film makers on board), this is the first time such an international quality film has been made, and in the words of the Kalyan, it “celebrates wildlife and diversity in Karnataka.” Brilliant, and exceptional, prepare to be wowed.