A three-day acting workshop for the transgender community will have celebrated industry professionals in attendance. 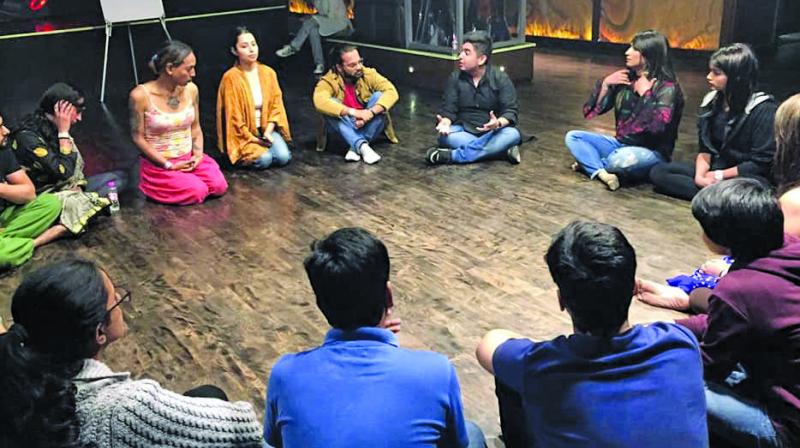 Actors in conversation during the Delhi workshops.

While legislative action is helping India’s transgender community find a footing and voice in society, a lot needs to be done on the socio-cultural front so that members of the community receive the acceptance and opportunities they deserve. In a move in that direction, the Keshav Suri Foundation and Faraz Arif Ansari, are organising TRANSaction, a series of acting workshops held over three days to help actors belonging to the Indian transgender community learn from the best in Bollywood and hopefully, find a footing in the industry.

Akshay Tyagi, Manager (Programs) at the Keshav Suri Foundation says the idea to organise such a workshop took root the day a panel discussion, held during Queering the Pitch – Agents of Change (the Foundation’s annual conference) raised questions about the dearth of LGBTQIA+ actors in Bollywood.

“While scriptwriter Apurva Asrani felt that talent rather than sexual orientation should influence casting, filmmaker Faraz Arif Ansari felt that in order to make Bollywood truly inclusive, LGBTQIA+ actors should be given the chance to essay roles that resonated with their identity,” reveals Akshay. However, the Sisak director, through his own casting experiences realised that it was difficult to find good queer actors as they lack training  and platforms required for honing and highlighting their skills. “The idea of TRANSaction emerged from this conference as Keshav and Faraz decided to turn words and thoughts into action,” says Akshay.

This three-day event will see celebrated industry professionals like National Award winning actresses Kalki Koechlin and c, casting director Tess Joseph, actors Gaurav Alugh and Ishwak Singh conduct acting workshops and Q & A sessions with the participants, while Ashley Lobo’s Danceworx will offer a few dance tutorials. “This platform will help participants meet, interact and learn from members of the Bollywood fraternity so that they get the exposure needed to be part of such a competitive and close-knit industry,” asserts Akshay.

About 27 individuals have signed up for the workshop, however, Akshay says that they are inviting on the spot registrations as well and will welcome up to 40 participants. “However, we don’t want to exceed that number because we want participants to get enough room for practice and also get a chance to interact with the mentors,” adds Akshay. To spread the word about this workshop, the Foundation took the help of social media, as well as Delta App, a dating app for LGBTQIA + individuals and the network of Transqueen India, a transgender beauty pageant.

While mentioning that the Delhi run of TRANSaction, which happened from March 1st to 3rd was highly satisfying for the participants, Akshay says that for the workshop to be truly successful, the Bollywood industry will have start opening doors. “We know that many such workshops will be required to make a difference and we are taking one step at a time, but a lot depends on the way the film industry reacts. Let’s see if they translate our efforts into their reality,” concludes Akshay.

The workshops will take place at Kitty Su, The LaLiT, on the 8th, 9th and 10th of March