Meet the sharks of Indian Navy

On this Indian Navy Day on December 4, meet the gallant officers who went out of their way in their attempt to keep the honour of Tricolour 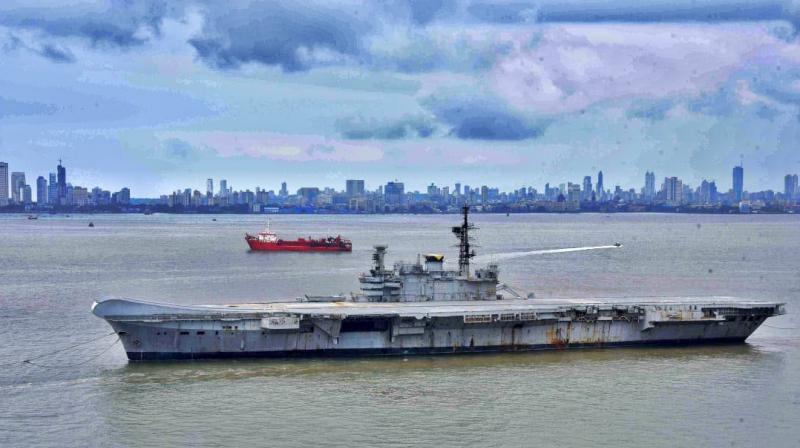 Picture for the representational purpose only - INS Viraat

Starting from December 4, 2020, the Indian Navy celebrates the commencement of a yearlong celebration of its 50th anniversary, commemorating the victory in the 1971 War. The 4th of December is also celebrated every year as the Navy Day in India to recognise the role and achievements of the Indian Navy, which had sunk four Pakistani vessels, a crucial turn in Operation Trident on December 4, 1971, which ensured the nation’s victory in the war.

The celebrations are also a tribute to its gallant officers who stepped up and went beyond the call of duty to keep the Tricolour flying. We bring you stories of Indian Navy officers who prioritised their comrades and others around them without concern for their own safety.

Man with splinters in his chest

In 1971, when India was participating in military confrontations between India and Pakistan, a child was born to a naval officer. The joyous parents named their little one Varun, after the lord of waters, one whose horoscope at birth also predicted that he’d die in the waters. Deciding to meet his destiny head on, Varun Singh joined the Indian Navy, just as his father had, and it would change the course of his life.

Having grown through the ranks over the years, Commodore Varun Singh is living a second life, as he calls it, his survival nothing short of a miracle.

In May 2000, upon receiving information that three Al-Badr terrorists were holed up in a house in a village called Puttishahi near Bandipora in Jammu and Kashmir, Singh, who was then an Indian Navy Captain, was deployed on a mission to tackle the increased infiltration attempts from Pakistan. The then-Navy Captain and his team took down one terrorist with grenades and RDX bombs. Several jawans jumped the wall of the building to take down the other two terrorists, when there was a sudden volley of bullets. While other jawans took cover behind the wall, Captain Singh covered two others who were Stunned by the sudden firing and in no state to move.

“Just then, the two terrorists emerged from the cow shed, trying to shoot those they’d seen,” recounts Commodore Singh.

One of those bullets hit the grenade placed on the right side of Singh’s chest. “It didn’t explode. Instead, it splintered and tore open my chest. I fell unconscious and my fellow commando picked me up and rushed me to the Army hospital in Srinagar,” Commodore Singh recounts.

Seventy-five splinters on the right side of his chest and one in his heart, his arm in pieces, his right humerus shattered, hand paralysed, two years of hospitalisation and 20 years since, Commodore Varun Singh is only filled with gratitude to his family and friends and for his second chance at life.

For his exemplary courageous actions, commodore Singh was awarded with Shaurya Chakra in 2001 and continues to serve the Indian Navy with distinction, and yes, with over seventy-five splinters still embedded in his chest and right arm. “When you wear the uniform, you have a sense of duty for the nation. It’s the virtue you need to have,” says the fighter officer, who was diagnosed with cancer in 2018 and went on to defeat the deadly disease, too.

The man at sea to rescue

Chills run down your spine listening to Captain Milind Mohan Mokashi, Commanding Officer (CO), INS Sumitra, narrating the story of Operation Rahat of 2015, which entailed evacuating over 2,500 different nationals from five different missions, braving enemy fire in a war zone during the 2015 military intervention by Saudi Arabia and its allies in Yemen during the Yemeni Crisis.

On March 31, 2015, Captain Mokashi, while carrying out an anti-piracy operation in the Gulf of Aden, received a directive to proceed for Operation Rahat to evacuate thousands of Indian nationals. Captain Mokashi routed his ship towards the Aden Harbour where he observed heavily armed Houthi rebels patrolling harbours in boats and jetty. He also observed fierce fighting and airstrikes by the Saudi-led coalition. But Captain Mokashi was up for this mission and ended up evacuating hundreds of foreign nationals as well.

Captain Mokashi remembers how, amidst heavy cross-firing, with marine commandos in boats, he had forty-five minutes at the port to rescue the large crowd. “There were 130 people on board that day. We had no idea what we were getting into. It was an unknown territory for us, but we were confident,” says the officer. With limited information at the sea, Captain Mokashi braved the external challenges while continuously testing his decision-making skills.

“Among the people, there was a man with an Indian passport, while his wife had an Iranian passport and their kids had Yemen identification proofs,” remembers the Captain, who still decided to evacuate the family. “You have to make such decisions when you are away from everything and there are no specific instructions at times. It’s between a humanitarian act and ensuring the safety of the ship. We were not one man but the entire ship.”

From Aden, the CO and his crew embarked to Ash Shihr Port and then Al Hodeidah Port. The officer’s inspirational leadership was rewarded a Shaurya Chakra in 2016. “You just do the best you can and have that commitment being in the Indian Navy,” adds Captain Mokashi.

A warrior on a mission

When Commander Vikrant Singh joined the Marine Commandos (MARCOS) in Indian Navy, little did he know that his job will always be the last in any mission, meaning he must ensure positive results. With two back-to-back operations—Op Babagund and Op Waroura—then-Lieutenant Commander (Lt Cdr) Singh, the Officer-in-Charge of Naval Detachment (North), participated in eliminating five terrorists.

Last year, a joint cordon and search operation by 22RR along with the Police Special Operation Group and CRPF in Beighpura Mohalla of Babagund in Handwara, did not seem to have hold of the operation owing to the congested housing. The Para Special Forces and MARCOS were called in. In a complex situation, when the terrorists broke out from the area that was ‘sanitised’ by the Para Special Forces, then-Lt Cdr Singh risked his life to target the escaping terrorists. Lt Cdr Singh took down a terrorist and saved his fellow officer, for which Commander Singh was awarded the Nao Sena Medal this year. “Special Forces are expected to achieve the mission successfully, for they’re called in when there’s a complex situation, and to be a part of this force and its missions is a privilege. We’re well-equipped with training and always mentally prepared to deal with any situation,” says commander Vikrant Singh