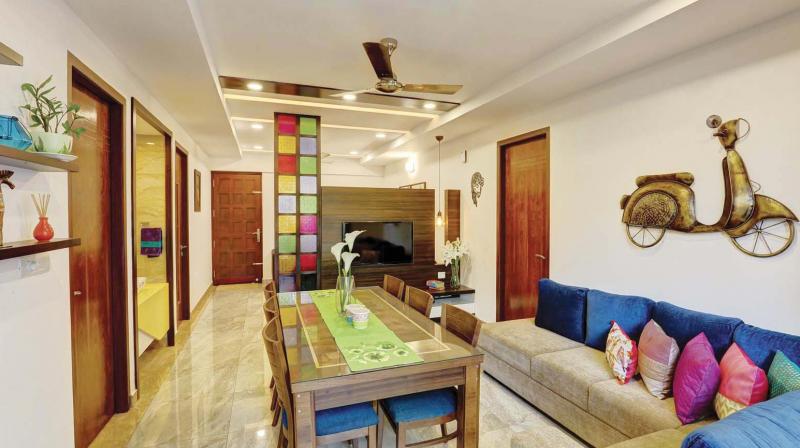 Philip Koshy and Nitha Roy were running a business in Kannur. At one point, they decided to wrap it up and shift their base to Kochi. A few years ago, the couple had bought an apartment in Vazhakkala as an investment; so they decided to make it their home.

“Both of us hate high-rise buildings and always preferred a house to an apartment. But we couldn’t find the one. Since this apartment we bought back in 2013 was a ground-floor space in a decent area, away from the bustle of the city, we decided to give it a try,” says Nitha. 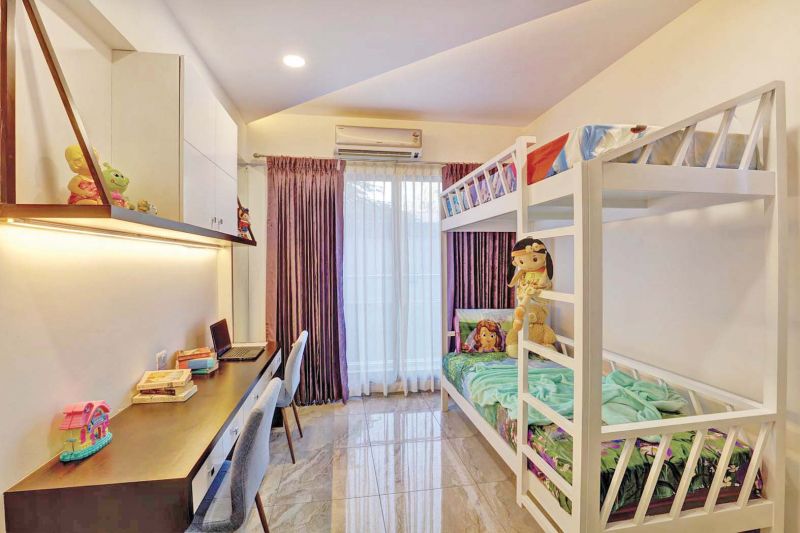 For their dream home, the couple had several ideas. While Philip had in mind a Chettinad-themed home, Nitha was smitten by the Bohemian-style room she had come across in a magazine. Looking for the designer behind the work, they traced Shinto Varghese, who listened to their ideas and gave his inputs to build a cozy space for the family of four in the 1,421 sq ft apartment.

“We had a few demands. The kitchen had to be Bohemian-themed. There should be a private family area with greenery. The kids’ room should have a bunk bed which, later, can be converted into two separate single cots,” recalls Nitha, who is glad that things turned out to be better than she had hoped.

After listening to their ideas, Shinto had the plan ready for the house with two bedrooms — one for the couple and the other for the kids, Zara and Aimee. The colourful Chettinad elements can be seen in the muti-colour glass partition between the living and dining spaces, the matching cushions in the sofa in the living area and even the vertical garden in the family area, as they call it. Every part of the home has a peculiar charm to it. The kitchen, with white cupboards, vintage look and indigo tiles similar to the azilejo patterns, is a replica from the architecture of a long-lost era. “To find the tiles we had in mind, we were walking in and out of every ceramic store in the city,” she says.

Another part of the home that attracts a visitor is the vertical garden in the family area. “The garden itself was a plan to hide the pipes that spoilt the charm of the space. We were strictly against the cliché vertical garden pattern and had asked Shinto to try something different. He did it wonderfully,” she says.

The dining area has a wall that houses a collection of unique and rare mantelpieces. The opposite wall is adorned by a metallic artwork of a bicycle. The family’s penchant for décor pieces is evident. “Wherever we go, we find time to hunt down the exact piece for the space — the cages, tea lights, plant pots, paintings were all picked up from various places we visited. The mirror in the balcony area is something we had bought around four years ago. We didn’t have the proper spot to place it, until we moved in. This placement turned out to be perfect, because it reflects the greenery on the premises,” says Nitha, who, together with her family, moved into the home two months now.

The beautiful house appears like a fairy tale cottage, with its old world charm, bright hues and a touch of magic!