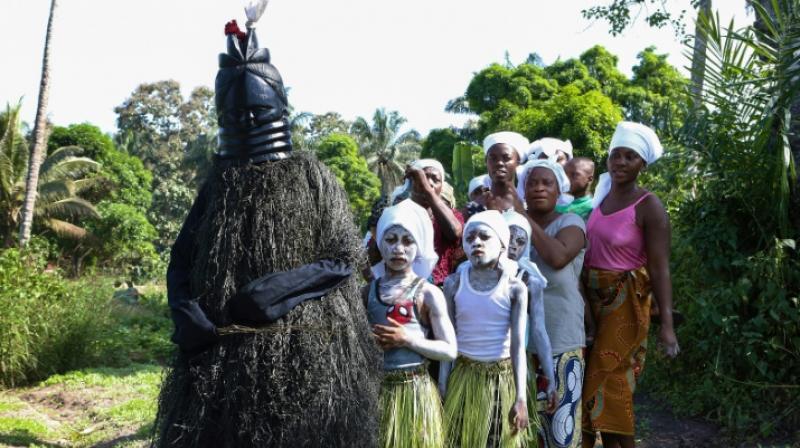 The challenge is to eliminate female genital mutilation, but not the Bondo culture. (Photo: AFP)

Wearing a fading Mickey Mouse T-shirt, her knees hugged to her chest, eight-year-old Musu Kamara sits in a corrugated shack in Sierra Leone's capital waiting for her initiation into a secret society.

Kamara will leave for two weeks in the bush with a sisterhood called Bondo.

There, she and other girls will learn ritual dances and chants and how to confront spirits as the group is groomed for adulthood and tribal duties. And Kamara will also have to endure female genital mutilation.

For youngsters in Sierra Leone, the end of the school year often means passing through initiation into a Bondo or, for boys, an all-male group called a Poro.

The ceremonies have deep roots and are jealously guarded in many villages, where they are defended as a vital moment in life.

But many of the children who take part in them will be scarred, physically as well as mentally. Boys, whose retreats can last months, may be sliced on the back with razors to leave the "mark of the teeth" of a spirit that swallows them.

Girls face "cutting": the removal of their clitoris, a practice found in other parts of Africa, the Middle East, and Asia -- and increasingly reviled.

Secret societies have an entrenched role in tribal and political life in Sierra Leone, as in other parts of West Africa. Membership confers social status and respect, even opening doors to tribal chief posts and government jobs.

Joe Alie, a professor of African studies at the University of Sierra Leone, said more than 90 percent of the country's population was involved in ancestral and secret rites. Bondo and Poro societies "still play a leading role in the social, religious and political life" of communities, he said.

But President Julius Maada Bio's government faces a delicate balancing act over how to manage these influential organisations and their traditions.

The pain of ritual, especially female genital mutilation -- FGM -- is increasingly under attack. Even Bio's wife, Fatima, was caught up in the debate early this year. She provoked a huge backlash after publicly declaring she was not against FGM, which practitioners call circumcision.

The first lady later said she had been misunderstood and that she condemned the forcible excision of girls aged under 18.

Yambundu Oile, who has initiated thousands of girls like Kamara, said "cutting" was only part of the initiation.

"It is not only to circumcise them, we also teach them to be a woman, to cook, to respect the elders," she said. "After the initiation, they return to their community to continue their education until their marriage."

The societies are under pressure after a string of kidnappings and even deaths, forcing the government to temporarily ban them. Now rituals cannot be imposed on minors without their consent, and any discrimination for non-membership of a secret society is prohibited.

"The challenge is to eliminate female genital mutilation, but not the Bondo culture," which plays an important role in society, says Rugiatu Turay, a former minister who supports a ban on FGM. "We have more Bondo sites than schools in Sierra Leone... But it's hard to convince people to reform their practices because politicians fund circumcision ceremonies to win votes."

Despite this, the outcry against FGM is leading to change.

"I want none of my daughters to undergo genital mutilation, which leaves a mark for life," says Mabinty Bangura, who endured FGM 20 years ago -- a ceremony whose pain, she said, "never seemed to end".

"One woman covers your mouth, another is holding you by the chest and two others by the legs," she said. "Then they spread your legs, remove the whole clitoris and apply a tissue impregnated with medicinal herbs."

In the northern regions of Tonkolili and Port Loko, a new type of ritual is emerging in which girls are initiated by the Sowei -- the head of a female secret society -- but are not "cut."

It is the initiative of a Swiss aid worker, Michele Moreau, who in 2010 became the first European to join a Bondo, taking the name of Shema Roko.

"Twenty-five Soweis have vowed before leaders to stop the circumcisions. They replaced their red scarves with yellow ones, creating the 'Yellow Bondo'," said Moreau, whose association supports the schooling and health of young girls.

Since then, around 700 girls have been initiated in Tonkolili without undergoing FGM. Some applaud the initiative as a way of enrolling secret societies into the fight to stamp out mutilation. Others, though, oppose it as disrespectful.

"I hope that circumcision continues, but with the consent of the girls," said Sento Kamara, a Bondo member. "It is part of our culture and our tradition."