Indian women through the eyes of British artists

There are fascinating accounts by British officials, scholars, travellers and missionaries about their impressions of Indian women. 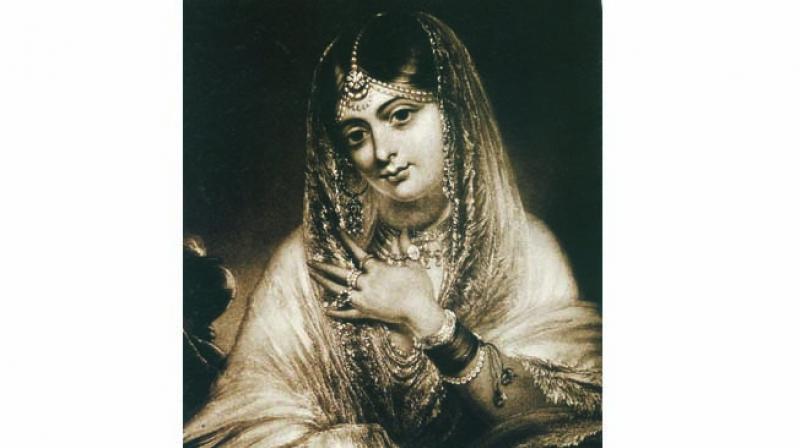 Indian women have always been considered among the most beautiful in the world — poets and scholars have sung paeans of their beauty and charm throughout the ages and their alluring figures have been frozen in stone by nameless sculptors. Until the arrival of British artists in the 18th century there was no visual record of the India and its people. We owe it to them for the true to life portrayal of Indian women. Historian Robert Orme (1753) aroused everyone’s curiosity with his remarks that “nature seems to have showered beauty on the fairer sex throughout Indostan (sic) with a more lavish hand than on most other countries.”

There are fascinating accounts by British officials, scholars, travellers and missionaries about their impressions of Indian women. They speak about their physical beauty and charm, costumes, jewels, customs and manners. Indian ladies of aristocracy were secluded in the zenana and observed purdah. The women who came into contact with the English sahibs were the bibis or unofficial wives of British officials, the nautch girls or the female servants. In the countryside, however, both in the plains and the hills, the Europeans saw women young and old out in the open as rural life was generally free from purdah. 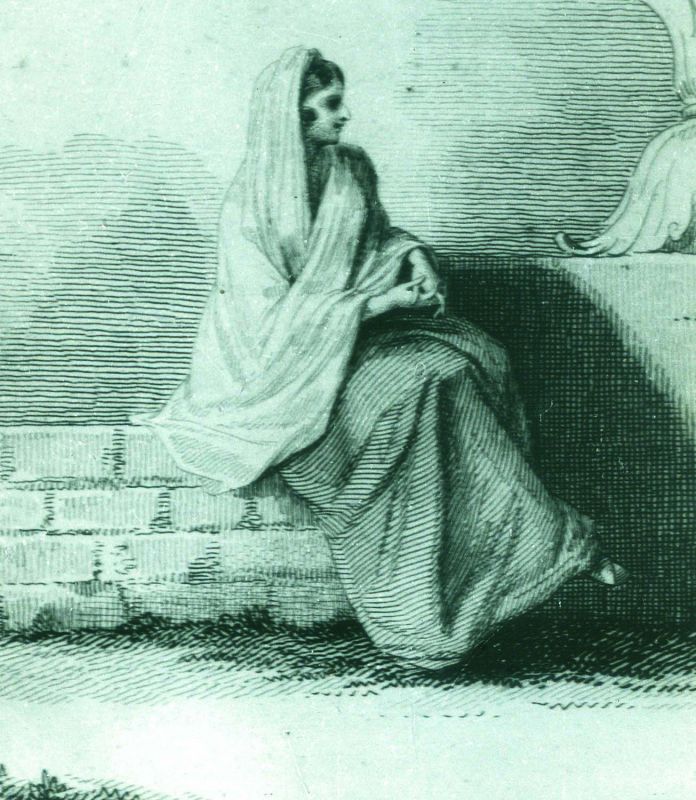 A Hindustani Woman by WIlliam Hodges (1780)

Just as landscape painting was influenced by the British concept of “picturesque”, the Western concept of beauty had its impact in the portrayal of Indian women. William Hodges, the first British professional artist to visit India in 1780, acknowledged that his portrayal of Indian women was based on ideas of classical beauty. He was in raptures after seeing village women at the ghats. He watched them bathing, observing that the younger women in particular delayed and lingered, “sporting and playing like Naiads or Sirens.” He remarked: “To a painter’s mind, the fine antique figures never fail to present themselves when he observes a beautiful female form ascending these steps from the river in wet drapery, which perfectly displays the whole person, and with vases on their heads, carrying water to the temples.” 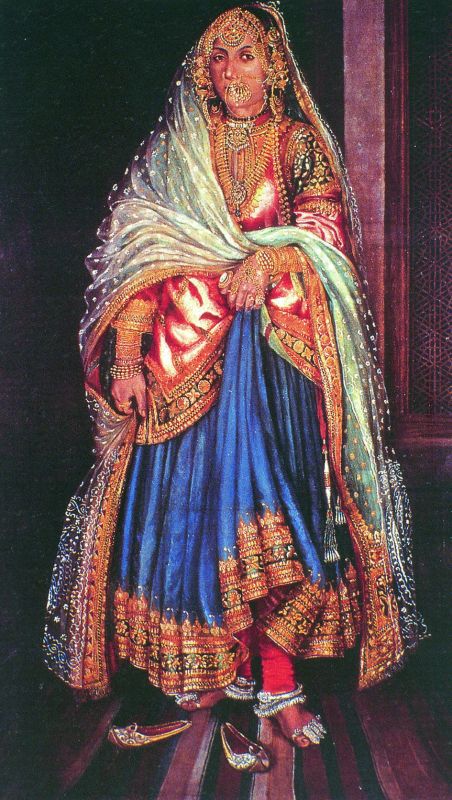 The delightful sight of women at the river ghats inspired many a Company officer and soldier to record his impressions in diaries and journals. Lieutenant Thomas Bacon was captivated by their grace and charm and found them remarkably beautiful both in feature and figure with faces of a more Grecian mould and their beauty enhanced by the simplicity of their costume. He added: “no Englishwoman would venture to place the charms of her cramped figure in competition with the unshackled graces exhibited among these children of nature.” Bishop Reginald Heber of Calcutta (1823-26) was not immune to feminine charms and has made many references to pretty young women in his journal Narrative of a Journey. Heber was also greatly attracted by their skin colour and pointed out that the deep bronze tint was more naturally agreeable to the human eyes than the fair skins of Europe.

There are a few perceptive portraits of sahibs’ bibis by some eminent British professional artists of the period like George Beechy, Tilly Kettle, Francesco Renaldi, Charles Smith and Thomas Hickey. An outstanding painting of an Indian lady of royalty was made by George Beechy who was the court painter of the Nawab of Oudh. It was said to be a likeness of one of the begums of Oudh but is captioned as “Hinda”, a common Indian name. It was believed that the Nawab had permitted the artist access to his zenana for the purpose of painting the portrait of a royal favourite. 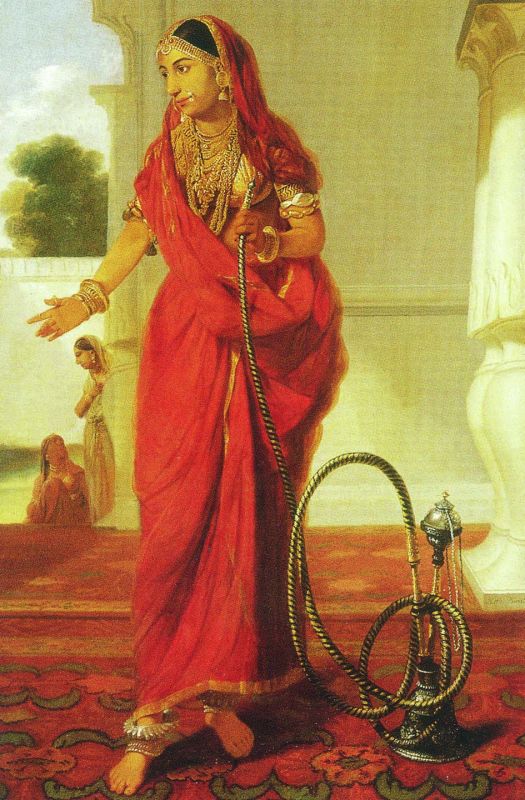 It is observed that British reactions to the physical appearance of native women were influenced by the general attitude to feminine beauty and also by their association with a particular region of the country. Kashmiri women figure in quite a few accounts and are extolled for their charm and beauty. John Henry Grose (1760) noted that the native princes would spare no effort or cost in procuring Kashmiri women for their harems. James Forbes, a noted Company official (1965-84) in his Oriental Memoirs describes a noble lady he met at Surat as: “one of the greatest beauties he ever beheld”. Richard Burton, the famous scholar pays high compliments in colourful language to Sindhi women while Marianne Postans, wife of a Company official, eloquently describes the remarkable beauty of Kutch ladies. About Bengali women, Margaret M. Urquhart (1927) in her book Women of Bengal states: “in figure she stands comparison with the finest races of the world”. Nagar women of Gujarat are praised for their grace and charm and particularly their dark eyes: “in whose depth glows a spark of passion around which humour and laughter play”. The Maratha women, especially of the aristocracy, are portrayed as singularly charming and credited with intelligence and refined manners. The romantic image of Punjabi women has been captured by some artists who admired their grace, charm and fair complexion with rosy cheeks. Maidens of the Punjab hills were extolled for their attractive and graceful figures and for their sense of humour. No wonder, some sahibs took these “daughters of nature” as their partners and chose to settle down with them in the beautiful environment of the Punjab hills.

In the South, Nair women were admired for their unique charm. Some others swore by the women of Canara for their lovely dark eyes and soft glossy hair falling down to the knee.

As regards the status and role of Indian woman in society, there were conflicting views expressed in colonial writings. One highlighted the abject position of women in society and the other glorified Indian womanhood. Flora Annie Steel, a famous literary figure of the late 19th century, after analysing the two opposing views held the ideal Eastern woman at a higher pedestal for her self-abnegation and greater moral courage. Another woman author Elizabeth Cooper (1915) admires the Indian woman for “her innate sense of modesty, her womanliness, her love of home and children and her feminine qualities which to the Western mind may appear as weakness but in fact constitute her appealing charm”. She adds: “if the Western woman offers her gifts of modern education and intellectual advancement her Eastern sister will not be her debtor if she, by example, presents the even more precious charms of obedience, modesty and loyalty, which fundamentally are the priceless jewels in the crown of world’s womanhood.”

Easily the most outstanding and comprehensive study on Indian Women is an early 20th century classic Women of India by Otto Rothfeld. “The Book of Indian Womanhood” he writes “has many pages, and each page is different one from the other.  Living in a wide continent, the speech of one group of women is not as the speech of another. And in faith they are not one, nor in blood not habit. But though the leaves of the book are of various types, yet they are all one shape bound in one cloth and colour. For to all of them, above all else, is contentment with their own womanhood, faith in religion and the natural hope of love. An unremitting devotion and unfailing tenderness that is the Indian woman’s service in the world, and it is her loving service that has given its best to the land. India has had great preachers and great thinkers, it also has had brave soldiers. But more than the men, more even than their best and bravest, it is the women who have deserved well of the country…for the women of India have raisedan ideal, lofty and selfless, for all to behold, and they have come near its attainment. And with all its self-sacrifice and abnegation, with all its unremitting service, the ideal is not inhuman nor is it alien to the nature of womankind. It allows for weaknesses, it is kind to faults and it aspires frankly to the joys of a fulfillment deserved by service. Not without reason did the writers of old India liken the perfect woman of their land to a lotus in that she is tender as a flower.’