Time and again this issue gets raised, noise is made, and then once again it dies out. 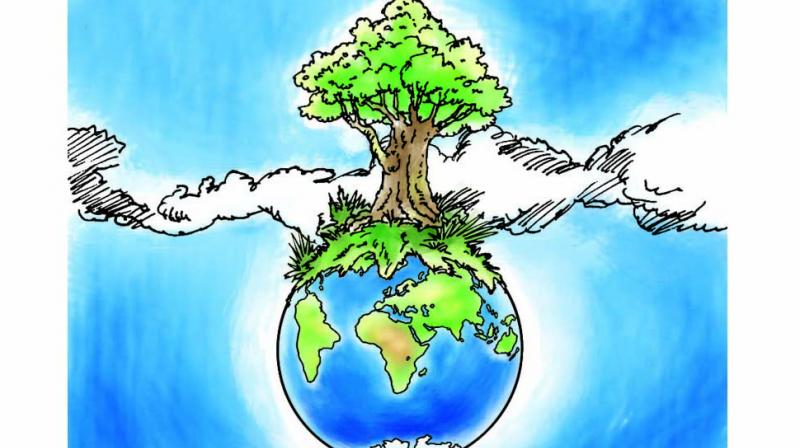 Meanwhile, on a global level, out of the seven million people premature deaths each year from air pollution, about four million occur in the Asia-Pacific region.

As this year's World Environment Day aims to create awareness about the air pollution crisis that the city has been grappling with, it is time to take stock of the damage that we continue to inflict of our environment.

The national capital has been being tagged as one of the heavily polluted capitals in the world with an unhealthy air quality index for the majority of the year. In 2018, the major reason of toxic smog trapped over New Delhi was the unusually cold air, with fog and lack of wind aggravating the problem. A new study has revealed that air pollution in the Capital is responsible for approximately 10,000 to 30,000 annual deaths in the city which means the capital city loses about 80 lives every day to pollution from PM2.5 (a deadly element in present nowadays in the air). For the uninitiated, 2.5 micrometers is about 3% of the diameter of a human hair, which is why PM2.5 can easily go into the lungs and cause damage. While the center and the state governments have been involved in a blame game, it is time that each citizen steps up to take charge. “We all are blaming each other for the cause of air pollution; the government is blaming other government for not taking any action, some are blaming farmers for burning crops while others are blaming the truck drivers for pollution caused. But no one is ready to accept that we all are equally involved in it. All of us should contribute, as fresh air is essential for all of us. We all can do it together if we take responsibilities rather then just playing the blame games. Every individual everyone can contribute,” says PN Vasanti Director General of CMS Vatavaran.

Over the last few decades, the city has seen rapid urbanization, leading to elevated levels of pollution. Dikshu Kukreja, an urban planner says, “One of the serious transformations taking place is that Delhi is slowly but surely becoming a poisonous gas chamber.

Time and again this issue gets raised, noise is made, and then once again it dies out.

Polluting traffic, construction dust, and stubble burning around Delhi, amongst others, are the often-cited sources for air pollution".

Meanwhile, on a global level, out of the seven million people premature deaths each year from air pollution, about four million occur in the Asia-Pacific region. World Environment Day 2019 will aim to bring light to this issue, urging governments, industries, communities, and individuals to come together to explore renewable energy and green technologies, and improve air quality. Shambhavi Shukla from Centre for Science and Environment says, "The health of those living in the state is getting affected due to air pollution and till date, the government has not taken any initiative to improve the air quality index. It is time they step up and  make the city a better place to live."