Climate change may be responsible for lightning-ignited fires 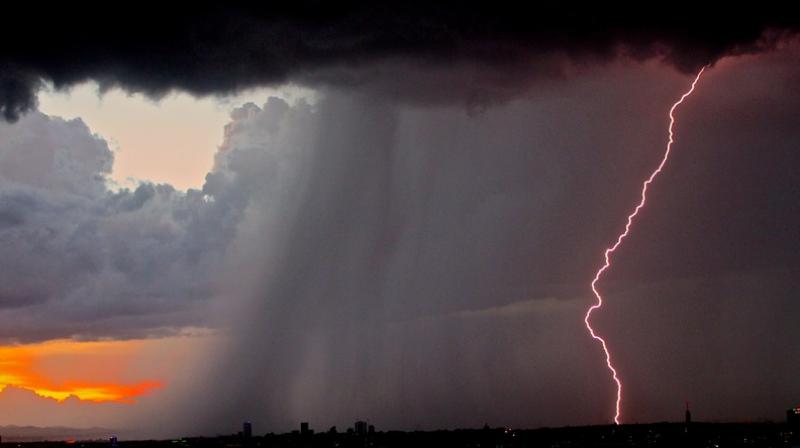 Washington: Climate change is responsible for many disasters across the world. A new catastrophe can now be added to the list.

According to a study conducted by the Portland State University, fires ignited by lightning have and will likely continue to increase across the Mediterranean and temperate regions in the Southern Hemisphere under a warmer climate.

El Niño-La Niña, known as ENSO, is the periodic warming and cooling periods of the equatorial eastern and central Pacific Ocean that affects the world's climate the most.

The Indian Ocean Dipole, or IOD, is a similar ocean-atmospheric phenomenon characterized by changes in sea-surface temperatures between the eastern and western part of the Indian Ocean, while the Southern Annular Mode or SAM, describes the north-south movement of the westerly wind belt that circles Antarctica and carries moisture to the southwest corners of all the Southern Hemisphere continents.

Heat, oxygen, fuel and an ignition source combine to start wildfires, but where and how quickly a fire moves depends on the terrain, the types, and condition of vegetation present and the weather, said Andres Holz, the study's co-lead author.

The study found that of the three climate drivers, the SAM had the strongest impact on fire activity - both lightning- and human-caused wildfires - due to a combination of lower precipitation and higher temperatures, said Holz.

During the positive phase of SAM, the westerly winds contract toward Antarctica, leaving large areas in southern South America, South Africa, and Australia rain-free. The recent positive trends in SAM are attributed to increasing greenhouse gas levels and the hole in the ozone layer. "Now the winter is not as rainy and the summer is longer, drier and warmer," Holz said.

Drier winters mean less moisture on the land, and warmer springs and summers are pulling the soil moisture into the air more quickly, allowing the soil and vegetation to dry out and ignite more readily, he said.

The study found that the natural influence of the three climate modes (ENSO, IOD, and SAM) on fire activity was stronger during the 21st century than during the last couple of decades of the 20th century as a result of anthropogenic warming. That trend is expected to continue.

Climate change is amplifying climate-fire teleconnections, or the strength of long-distance relationships between weather patterns and fire During the onset of the 21st century, lightning-ignited fires were tightly coupled with upward trends in the SAM and rising temperatures across the Southern Hemisphere

"We think that by having warmer oceans and warmer temperatures in general, we're going to see higher evaporation and heat transfer, and thus higher frequency of convective storms that in turn results in more lightning-ignited fires," Holz said. "And with a climate mode such as SAM stuck in its positive, fire-prone phase that seems to amplify climate change, it doesn't look good."

But Holz cautioned that it does not mean that there will be an increasing number of fires everywhere. Under warmer conditions, if precipitation stays constant, there will be increased fire activity in areas that already have plenty of fuel to burn but have historically been too humid or wet to burn.

On the flip side, areas that are dry year-round will likely see a decline in fire activity with global warming unless there's a strong increase in rainfall. "These trends are expected worldwide, not just in the Southern Hemisphere," Holz said.

The study appears in the journal Geophysical Research Letters.