Finding his purpose in life

Meet Abhay Rangan, founder of Goodmylk, who has made it to the Forbes 30 Under 30 Asia list at age 22. 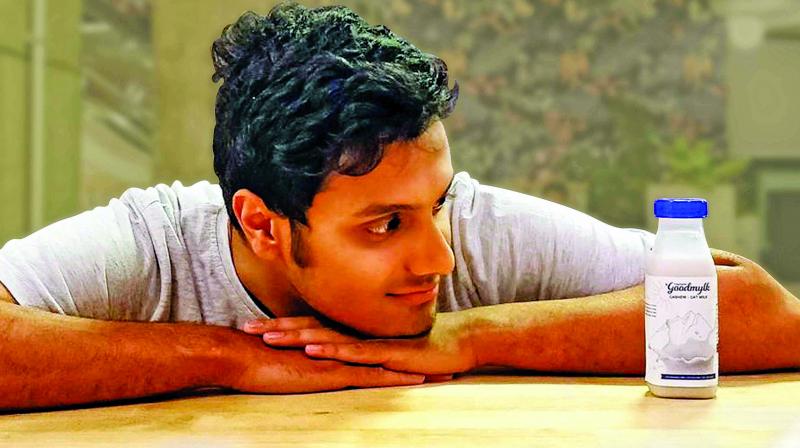 “A few years ago, I had a conversation with someone about all the ideas I had for a plant-based India, and he asked me: ‘What do you have to show for it?’ I realised I didn’t have a good enough answer. That moment, I resolved to work more than I talked,” says a July 2018 Facebook post of Abhay Rangan. Cut to present and he has indeed walked the talk. Abhay has found a place in the Forbes 30 Under 30 Asia list for 2019. At 22, he is the youngest Indian on the list. “I am incredibly happy that the movement to make plant-based food acceptable is receiving the recognition it deserves,” he begins.

The signs were all there, right from his teens — at just 16, the young boy ran a non-profit animal rights organisation for two years.  So, it was only a matter of time before Abhay proceeded to bigger arenas finding his calling in veganism — a movement that is gaining traction all across the world. He launched Goodmylk in 2016 with a mission of making affordable cruelty-free dairy alternatives.

Abhay goes back to the time when he was combining  animal rights activism and veganism and had people approaching him with a query, ‘Veganism is expensive. Why are all the vegan alternatives that exist either not affordable or accessible to people?’ Seeking an answer to that statement set Abhay on an entrepreneurial journey that would challenge that assumption. It was not an easy road to take. Weighed down with a backpack full of plant-based milks that he and his mother would prepare in their kitchen, Abhay, after his college hours, would ride 500 km every week on his bike through Bengaluru to distribute his vegan products. There were obstacles. “If you make something  fresh at home, there is every chance that the shelf life be less. My family, me included, knew nothing about the food business; we were just a family of academicians and entrepreneurship was something we all learnt along the way,” he candidly states, “Though the beginnings were hard, commercialising and later scaling the business to a factory level helped us stand out.

A shot in the arm was a funding of `2.5 crore Abhay received last year, which made the transition to being a company much easier. Veganism has a lot of takers in Bengaluru and other Indian cities. “The demand has always been there and if you can make delicious plant-based food as alternatives to people at the right price and level of accessibility, why would people not switch,” he asks. He states that the belief that veganism being restricted to only urban areas is a myth. “We believe that people would make the right choice as long as it is convenient and accessible and our mission is to make that possible and the rest will fall in place.” An example is the vegan yoghurt about which he says, “There are other vegan yoghurts but not at this price and quality. Actually, the USP of Goodmylk is that we try products within our family, too, since all of us are vegans. We tried and tested a bunch of yoghurt combinations before we all liked the peanut yoghurt the best since it suited the Indian palate.”

Abhay admits to have been an ambitious kid and sheds some light on his background. “My parents turned vegan nine years ago on their wedding anniversary which inspired my sister and me to turn vegan, too. I was 13 then. Growing in a home that had all those values early on really shaped me into the value system that I buy into today. Having been ambitious, this turn of events was only inevitable.” Abhay mentions that he never envisaged this role of an entrepreneur.  “It was the necessity to do something scalable and sustainable for the movement that kept me going,” he adds. The major challenge he faced, he admits, was his own ignorance. “I did not know what went into food processing and such. The hardest time was when we had a lot of orders, which my mother was finding hard to prepare and I was finding hard to deliver. May be if the clock was turned back, I would have done things differently today.”

His future plans include launching a variety of vegan plant-based products that work like dairy products. “We are also planning to expand pan-Indian so that our products can be accessed by all.”

Before he signs off, he says, “I find it silly when people say you have to give something up to be vegan. I haven’t given up anything. I’ve only replaced some things with better things. If anything, I’ve only gained — gained a purpose, gained a lifestyle where I get to make our world a better place, and gained a community where I feel  at home.”