Viren Sharma, an honorary canine expert, talks about his ardent love for pooches. 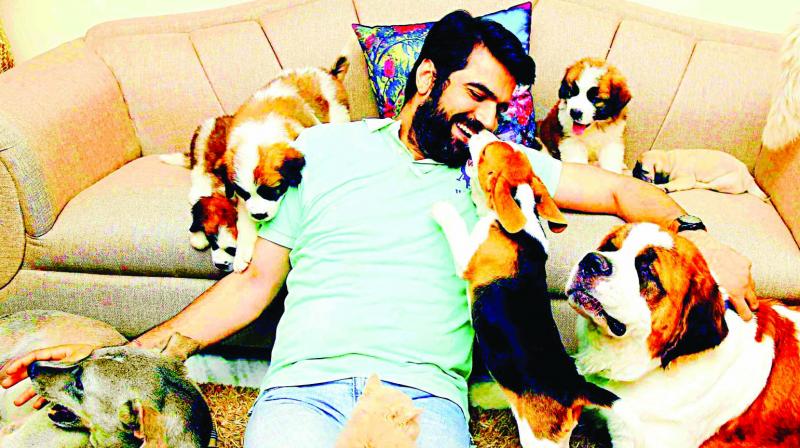 Viren has attended more than 300 dog shows across the globe and travelled across 4 continents to study and observe the latest trends in the canine Industry.

Dogs are truly man’s best friends. The faithfulness of a dog can’t be matched with any other animal. Viren Sharma (aka dog man of India) says, “My love for dogs was inherited. It is in my blood as my father used to keep dogs, also as a part of our profession. I used to get the stray puppies I found on the streets and for that I used to get a bashing from my mother, but I never discontinued with it. Dogs remained my passion and turned into my profession.”

Viren has attended more than 300 dog shows across the globe and travelled across 4 continents to study and observe the latest trends in the canine Industry. He is closely associated with the world’s leading Agrani Kennels. Viren owns more than 3 pet boutique stores and a pet hotel in the pink city. With his unique marketing strategies, dog-owning families in Rajasthan have increased from 300 to over 1 lakh. His esteemed client base extends from the President of India to Bollywood superstar Salman Khan and many more.

He is a pet behaviourist with 20 years of experience. Talking about his organisation, he says “Mad about dogs (M.A.D) is basically for those people who love dogs like mad, like us. We are planning 100 stores of M.A.D and a chain of ultra luxury experiences of pet keeping, pet spas. Also, anyone can come even if they don’t have a pet and have a cup of coffee while playing with the dogs to de-stress. We are also looking at franchises of M.A.D. Dog Bazar, a separate platform to get maximum dogs raised and adopted to families,” he explains.

Viren truly believes dogs are wonderful, intelligent creatures.  He says, “Some dogs belong to a certain area — a hot or cold region — and though in the beginning it is a bit difficult to adapt, they are so smart they can manage.” He is referring to the trend of people importing dogs from Switzerland and getting them to India, even when there is a 50 degrees difference. “It is also about the coat or the fur of the dog. Indian dogs have learnt to adapt to conditions by shedding their coat during the summers and keeping it on during the winters when it is heavier and denser.  It is a natural process,” says Viren Sharma.

“People who don’t take proper care of dogs don’t deserve to keep them. The desired age to separate the puppies from their mother should be six to eight weeks. Puppies start becoming self-dependent and the mother of the dogs also start avoiding them as they keep pouncing on her to be fed,” he adds.

“The Indian mentality is changing when it comes to fitness and that is mostly because people have started keeping dogs. Today, you can see people running with their dogs beside them,” he continues.

“P.A.W.S (pet animal welfare society) is the NGO part of our organisation in which we do all the charitable activities whether it’s free dog adoption, free dog food, vaccinations or rehabilitation of the stray dogs,” he concludes.