An app to fight hate

HateHatao app lets users report instances of hate speech, threats and crimes along with the evidence in form of screenshots, videos, and pictures. 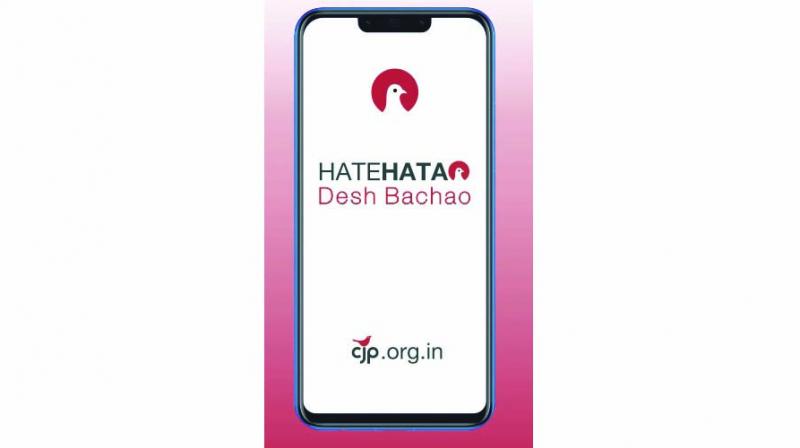 Over the last couple of years, the country has seen a significant rise in hate-based crimes. From hate speeches, threats to the actual events of violence, the vulnerable communities including the caste, religion and gender minorities have been targets of hatred spew. It is to sensitise, record, combat and provide systematic approaches to access relief against such crimes, a city-based NGO Citizens for Justice and Peace (CJP) has launched an android-app HateHatao on the Martyrs’ Day.

“We thought it is significant to launch it on the day when Gandhiji was killed, India’s first major hate crime after Independence. And, it’s also Rohith Vemula’s birthday. So, for both the reasons, we thought it is a very important day,” says Teesta Setalvad, the social-activist and the Secretary of CJP, on the significance of the date of the launch.

According to Hate Crime Watch, an initiative by Factchecker.in that records statistics of the rise of the hate crimes in the country, 2018 saw the bloodiest and the largest number in a decade with 92 hate crimes recorded in the length and the breadth of the sub-continent. Teesta believes hate crimes initiate a domino effect that results into acts of violence.

“We have been associated with battling communal violence for last 25 to 30 years. And, in our process, we have found that hate speech and hate crimes actually play a role in building up an atmosphere that finally allows the violence to break out. The violence is rarely spontaneous,” she says. She further adds that the structural inequity of the Indian society makes the marginalized sections like “the poorest of the poor, the Dalits, Adivasis, women, religious minorities, sexual minorities among others” susceptible to becoming victims.

What further aggrieves the situation is the lackadaisical treatment of the existing prevention, relief, and remedial options. “We have laws – Criminal Procedures Code, SC/ST Act, Cable Television Network Act, we have some sections for the religious cases but somehow these sections are not applied with the vigour we feel they deserve in terms of preventing hate speech,” reveals Teesta and adds that if the administration would recognise that the hate speech actually plays a role in escalating the communal violence, then they are likely to act against it.

The app lets Android users report instances of hate speech, threats and crimes along with the evidence in form of screenshots, videos, and pictures. “This is the age of civic journalism and citizen journalism, and the people feel helpless and angry when they see something happening in their village, district, or town. Also, in a way, we are empowering them to become a part of a bigger movement,” she reveals. Furthermore, with regular updates, the app will also have videos, and tutorials aimed at empowering and sensitising the users about hate-crimes.

The app also sensitises its users on the remedial and complaint options available by accessing the organisations like National Human Rights Commission (NHRC), the Press Council of India (PCI), and National Broadcasters Association (NBA) among others. Talking about the same, Teesta concludes, “We have said it in the app itself that we have different remedies - you can take it to the police, National Human Rights Commission (NHRC) or any other body. And, if there is a very serious offense and the police refuse to act, we will go to the court to get the FIR registered.”