In conversation with Nishad Avari of christie’s

The Art Specialist talks about Mumbai’s art history and legacy. 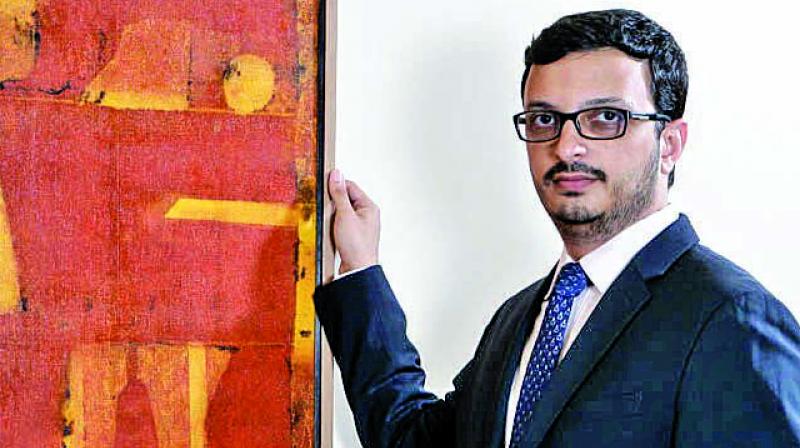 Besides its obvious role as one of the pioneering auction houses in the world, Christie’s India isn’t merely in the business of auctioning rare artworks but is playing a supplementary role in educating Mumbaikars on the finer nuances of collectables such as fine watches, jewellery, and more through its proposed lecture series and talks with experts. Nishad Avar, their dapper Specialist, Head of Sales & Associate Vice President, South Asian Modern + Contemporary Art, shares his vision for engaging wider audiences.

The South Asian Modern + Contemporary Art Auction held recently in New York had a couple of stellar art works inspired by Mumbai. Can you shed light on these works for our readers?

The auction included a strong selection of works by S.H. Raza and F.N. Souza from the late 1940s and 1950s, besides important works by Manjit Bawa, V.S. Gaitonde, and Tyeb Mehta. Amongst the city-inspired works, I would like to talk about Raza’s watercolour of The Oval (circa 1940s), painted before he left for France, which highlights the colourful hues of Mumbai’s iconic maidan – a haven for relaxation and cricket both perfectly depicted in this striking watercolour. A must have for any heritage loving Mumbaikar.

The work on the cover of the catalogue is from Akbar Padamsee’s very famous but short-lived ‘gray period’. It is likely the first painting from the series of twelve he did in 1959-60 and exhibited at Jehangir Art Gallery in 1960. It was inspired by Mumbai’s rooftops that the artist saw from gallerist and artist Bal Chhabda’s home in 1959. Padamsee recalls going to Chhabda for guidance about what to show in Bombay after six years of being away. “I went to Bal Chhabda’s place, from Bal’s window on the seventh floor I looked out at the view and could see such wonderful buildings. Bal said, ‘Why don’t you paint that?’ To which I replied, ‘I will do that’. So then back home I started painting and without looking at the landscape, I reconstructed the schema.” (Ed. note: The painting, which is at the beginning of this interview, sold for USD 912,500 at the auction on September 12, 2018).

This show was sponsored by Bal Chhabda’s Gallery 59, and this particular painting was bought from the show by Chhabda to support his friend and fellow artist, illustrating the close relationships in the art world at the time. Living in Juhu at the time, a seaside suburb of Bombay, Padamsee fondly recollects, “Painting in my Juhu flat, I started working on it for three or four nights. Because the sunlight was too much in my open courtyard, I had to work at night. And a dog used to come and sit next to me. He was so wonderful and really became a friend of mine. He didn’t budge, he would just sit in his own place looking at me, not barking or anything, all night as I worked.”

Besides contemporary art, has the palette of the Indian consumer widened?
Yes, as collectors become more knowledgeable and discerning, we find that they have expanded their repertoire to show an increasing interest in other areas besides South Asian art. There is a growing participation of Indian buyers across international sale categories. These include impressionist art, fine wines, rare watches, jewellery, and the ladies who love to bid for vintage handbags! At Christie’s, we have 80 categories. You’d be surprised at what people are keen on collecting. We had a few collectors from India bidding on various collectibles at the Peggy and David Rockefeller Collection sales earlier this year – perhaps the biggest sale of the century! So that’s something that makes us proud.

What makes Mumbai a hub for the Indian art world?
Mumbai, like Paris and New York, has always attracted the bohemian and artsy crowd. With its Sir J.J. School of Art, it was an obvious choice for artists in the 1940s and beyond to flock to in the hope of making a name for themselves. In fact, the Progressive Artists’ Group was founded in Bombay in 1947 by some of India’s best-known modernist including F.N. Souza, S.H. Raza, K.H. Ara, and M.F. Hussain. Since our office is housed in Colaba, we are surrounded and constantly stimulated by independent art galleries, museums, and a thriving cultural nexus that keeps the artistic sensibilities of Mumbai alive!

Christie’s set up an office in Mumbai almost two decades ago. Besides consigning and hosting auctions what else is on the agenda?
At Christie’s, we are always looking to host talks and other educational events about collecting in various categories for our audiences in India. We have had specialists from our jewellery and watch departments travel to the country for exhibitions and talks and have exhibited highlights from our sales in those categories as well as Impressionist and Modern Art here as well. We hope to continue doing this alongside the two annual previews of South Asian Modern + Contemporary Art that we host in India, and to continue to support the fantastic arts initiatives in the country including the India Art Fair, the Kochi-Muziris Biennale and the Serendipity Festival.
—By arrangement with thecitystory.com