Music, musicians and matters of rich heritage through traditional music. 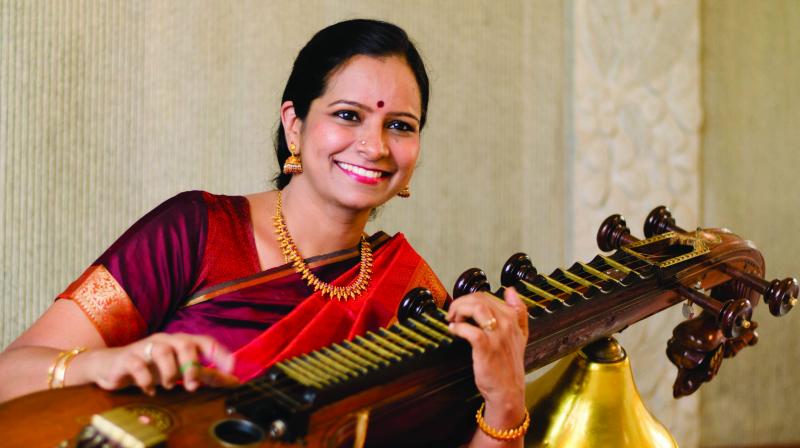 Sangeet Natak Akademi has been showcasing myriad art forms, hosting a multi genre festival Sreshta Bharat Sanskriti Sammagam. The locations have included Bhuvaneshwar, Ahmedabad, and Amritsar, and the latest edition was in Guwahati. Two more editions are planned in Lucknow and in the South.

The format is classic – deliberations on where the art form is heading in morning seminars, followed by a presentation of the art form in the evening. The first day was devoted to theatre, the second to classical music, the third to the folk tradition, the fourth to classical dance and the 5th to puppetry and allied arts.

The artist choices of music were novel – the opening Saraswati veena recital by Jayanthi Kumaresh perhaps marked a first in the region. The Veena is India’s national instrument. The Rudra Veena of North India, said to be created by Rudra or Lord Shiva, is considered so sacred, its practitioners traditionally were expected to observe austere pure living. The Saraswati veena of South India has no such traditions. In the words of its leading exponent today, Jayanthi Kumaresh, “it’s considered an auspicious instrument, played by none other than Devi Saraswati herself.” Jayanthi certainly handled the difficult instrument, which is played mainly on the fourth string, like a Goddess; her breathtaking passages indicative of her total mastery over her instrument. Her connection with her instrument is complete, evident even in her reluctance to let her veena be carried or handled by any one other than herself. In this performance, Jayanthi included accompaniment by an expert “Morsingh” player Pramath Kiran– Morsingh is a folk percussion instrument, but Pramath’s playing it on two notes (Sa and Pa) gave in an unheard of sophistication.

The next artist was Pt Ajoy Chakravorty, representing the finest North Indian vocal tradition, focusing on a meditative exploration of the Raga (Jog), in vilambit (slow) khayals. In his words “a Raga is greater than any artist; one must with humility seek to show its nature, to be of service to it, so that it permits its exposure.”

The evening ended with Dr Yella Venkateshwara Rao, undoubtedly one of the finest Mridangam exponents today with his troupe. He was accompanied by the Ghatam, Khanjira, Morsingh and Thavil, and unusually a vocalist who sang the composition in Raga Hindolam, Adi Taal.

The talks on the folk traditions of India focused on Gujarat, Kashmir, Jharkhand, Chattisgarh and Assam. What emerged unanimously from the discussions was that the folk traditions cannot adher to a fixed grammar, they are free flowing and constantly evolving, they represent a living changing culture. Being spontaneous outpouring of emotions of common people (“Lok Kala”) they need to remain authentic and not emulate popular music or dance traditions. Dr Prakash Khandge made the point that Lok Kala should be raw and unfinished; it’s like chewing a whole mango or eating only its extracted mango pulp. Dr Gagoi stressed the importance of using folk instruments despite their primitive construction so that they remain extant and not museum pieces. Having dance performances to piped music defeats the purpose of promoting the art form, which requires live concerts, he opined.

The evening performances of folk music of Gujarat by the celebrated Yogesh Gadhvi, Assamese folk music, Orissan dance and Manipuri martial arts were vibrant. One wished Yogesh with his fantastic robust voice had confined his accompaniment to traditional folk instruments; the banjo struck a discordant “filmy” note.

The next day was devoted to classical dance – the morning seminar covered Andhra’s Kuchipudi, North India’s Kathak, Orissa/Chattisgarh and Jharkhand’s Chau, Tamil Nadu’s Bharatanatyam, Manipur’s Manipuri and Orissa’s Odissi. Apart from being excellent presentations on each dance form tracing the evolution of the craft to its present day interpretations, all the speakers spoke of the need to preserve the essential elements of the dance form despite innovations coming in. All the speakers agreed that to absorb the nuances of dance, the age old direct interaction with the Guru was a prerequisite, as was an unhurried approach to assimilation As Prof Anuradha Jonnalagadda from Telengana quoted Guru Vempati Chinna Satyam “tradition is like a flowing river the old water flows away and new comes in”. Another point made during the deliberations was, according to all available texts, the origins of classical dance are undoubtedly one; their grammar is the same, no one form can claim a greater antiquity. Interestingly Kathak too, according to Parwati Datta was performed with dhrupad style compositions though today this fact is completely forgotten. Parwati Datta also touched upon the necessity of an informed audience – Sharang Dev’s Natyashashtra talks of the three types of listeners – the “Prekshak” or raw listener, the “rasika” or informed listener and the “sahhridya”, or like minded knowledgeable listener. Events like these help to create good audiences in remote places like Guwahati.

The evening saw dance recitals of Bharati Sivaji and her disciple, Sattriya by Ramkrishna Taluqdar and Anita Sharma, and Bharatanatyam presented in the much touted “Meera the Soul Divine” by Chitra Visweswaran and her troupe.