I stood up for national anthem, because I found it cool, not because I had to. 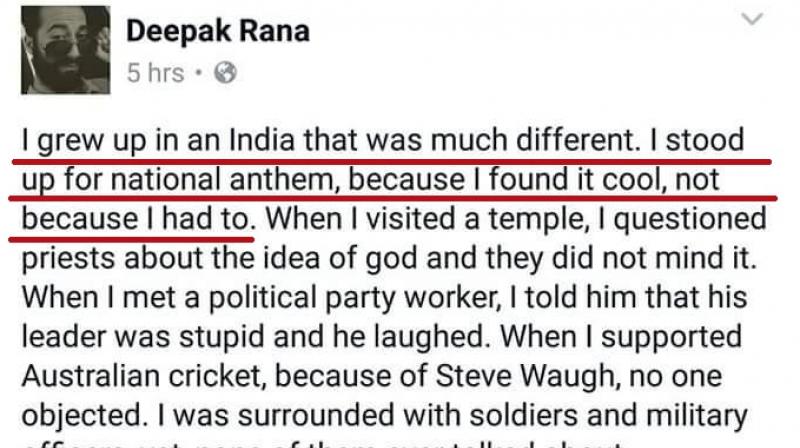 It’s funny, just a decade or two, and how quickly we have moved backwards (Photo: Facebook)

The drastic changes in Indian society have been a matter of concern for  a while now since any disagreement on social media over political beliefs is met by trolls and people are labelled anti-national for voicing their dissent openly.

There have also been several incidents of people being heckled for not standing up for the National Anthem before movies, and any question on the cricket team being responded to questions on patriotism. Recently a directive by the Supreme Court asking people to stand up for the National Anthem before a movie was the subject of a debate, as people expressed outrage at such gestures being made into decisive factors for one’s patriotism.

Among several posts on social media, Congress MP Shashi Tharoor shared one from a user called Deepak Rana, which mentioned how he grew up in an India where political differences were tolerated, people could support any team they wanted and stood up for the National Anthem because they felt like, instead of being compelled to.

The post highlights the changes in Indian society over the years and how the attitude should be a matter for concern, as it shows society as going backwards when it comes to free thinking, freedom of expression and the right to have a difference of opinion.