The 18 women include actresses, doctors, lawyers, writers and also two women who protested openly against the Sabarimala issue. 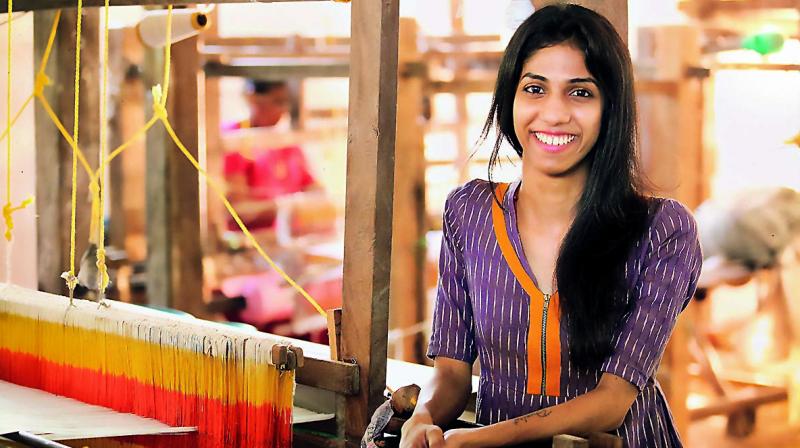 Sari designer Sharmila Nair’s campaign ‘18 Shades of Black’ has 18 women talk about the gender discrimination women often face in their daily lives. Now, an international organisation has approached her to make the campaign global.

The ‘18 Shades of Black’, a fashion campaign which has gone viral by Kochi-based  sari aficionado Sharmila Nair — is a take on the 18 steps of the Sabarimala Temple, which has been in the eye of a storm — as women can now pay obeisance to the famed deity wearing “black”. Looking at the number of women from 8 to 80-year-olds, who came out to protest, Nair, wanted to focus her new campaign on women fighting for rights, beyond right to pray. It could be anything from patriarchy to unseen restrictions and day-to-day struggle. She hoped to begin a conversation.

“I studied literature from Christ University, Bangalore and was an avid sari wearer, even when I was part of the union. Then I joined my father’s business being the only child. After marriage, I decided to do what made my heart yearned for and that was weaves. So I launched Red Lotus. We specialise in customised Kanjeevarams and handloom cotton. We have eight to ten looms running in Baneras,” explains Nair whose first campaign on transgenders was also a hit three years ago.

18 women faced the camera, in different shades of black saris and spoke openly about the trauma and discrimination they have faced.

In 18 Shades, each woman’s story is relatable. Though Nair had requested almost 100 women, only 18 “warriors” agreed to face the camera and speak openly.

But it is not just women, men too have come forward and told Nair, girls judge them when they come with marriage proposals based on their skin colour, so this discrimination is not gender-specific.

“Many women when I approached them for 18 Shades, told me that Sabarimala was a sensitive issue and I shouldn’t mix religion with fashion as it is a deadly combo. I was expecting a backlash, but the stories are so powerful that now people have created a hashtag #18 shades. They are narrating what they have gone through on social media. My idea was to start a dialogue, but it opened up floodgates.

The internet has responded so beautifully. I am overwhelmed,” says Nair.

The 18 women include actresses, doctors, lawyers, writers and also two women who protested openly against the Sabarimala issue. Shade No.1 Swati, reveals how traditionally mothers are always considered loveable, but the worst emotional trauma was inflicted on her by her mother. Not only was she abusive, but she also scarred her for life.

Remya Saseendran, a writer was unafraid of what the world told her. She was “not normal” as she didn’t embrace motherhood as she felt it was her body and she had the right to make a choice.

Soumya Sadanand, a poet, got a rude shock after the first night of her marriage when she was asked to make snacks for her husband and his friends who were partying, not allowing her to be a part of the party. Next morning her mother-in-law has asked her to get into the kitchen at the earliest and start cooking. She felt her life was bound and restricted inside the kitchen as she didn’t have any other outlets. “Now after the divorce, she lives happily with her new husband and the daughter from her previous marriage,” explains Nair.

The beauty of the videos is that nothing was scripted, making it unrehearsed, connecting with multitudes of women, though the one topic Nair wanted to include was body shaming. It is something she faces everyday being thin that people ask her to “eat well”, “if something is wrong” and “are you depressed”. “I am just genetically thin and I think this kind of talk is just annoying. But none of the 18 women had anything to say about body shaming, so we couldn’t include it,” she explains.

Nair, has used fashion as a powerful medium of communication, just like art, where a painter uses a canvas, to create an impact.