Cops rescue man after he gets stuck for 7 hours in failed burglary, Twitter has some hilarious reactions

The fire brigade had to come in and use the jaws of life to pull back all the extractor casing to release him. 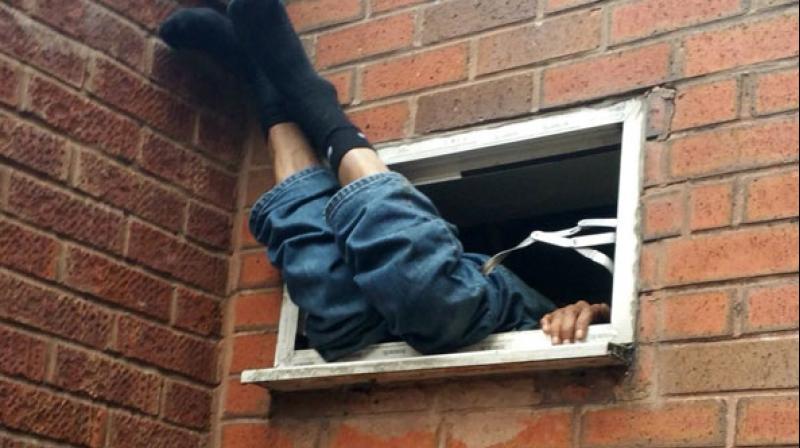 Officer PC Matthew Willocks was sent to the scene and clicked the photograph of the helpless suspect. (Photo: Twitter/WMPolice)

Some moments in life restore your faith in the ways of the universe and the concept of karma, and this burglar who needed the help of police to get 'unstuck' is the best example.

The burglar whose attempt at breaking into a takeaway restaurant late at night got foiled when he got stuck in the window.

And he ended up in that position for over seven hours. He was finally rescued when passerbys heard him shouting for help and one called the cops.

According to West Midlands Police, response officer PC Matthew Willocks was sent to the scene and clicked the photograph of the helpless suspect who was finally extracted from the hole with the help of fire brigade just before 9am.

Here's what we found when we were called to a burglary in progress today. https://t.co/2546WlYOLE pic.twitter.com/QvdXTj8Nuv

The officer said, “The extractor unit had been removed and the suspect had climbed in to the extractor outlet at around 2am. He was completely stuck and couldn’t move at all."

“The fire brigade had to come in and use the jaws of life to pull back all the extractor casing to release him.”

When the Police tweeted the image, Twitterati had some hilarious responses:

At least he took his shoes off before he attempted to violate someone's home!

The old saying "Thick as thieves" springs to mind 😂

Take his socks off and tickle his feet until he pees... the pee will drip down towards his face.

Does my butt look big in this?

The 45-year-old man from Handsworth was then taken to the hospital for a check-up and has been arrested on suspicion of burglary.