Galin affirms that randonneuring has brought so many changes in his life. 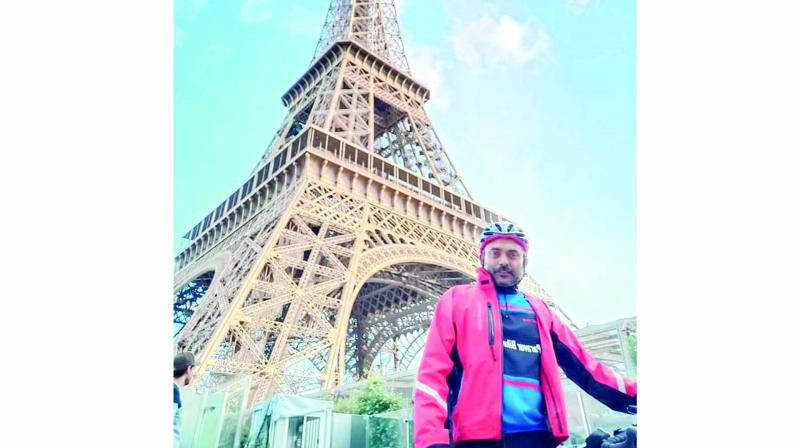 Cycling is a healthy choice for both humans and the environment to stay fit. Though many start cycling for the love of riding, when it turns into passion, they join cycling clubs and explore new dimensions of the sport, becoming randonneurs. With the emergence of a number of cycle/bike clubs across the country, randonneuring, a long-distance cycling sport, started gaining popularity.  Randonneuring in India has seen a massive following in the past 10 years. One of the prominent faces among Indian randonneurs is Galin Abraham, the 48-year-old randonneur cyclist from Paravur Bikers Club who has broken almost all the records of the sport in India, the latest by becoming the only Indian rider to complete 15 1,000+ kilometre rides. In the recently-concluded Paris-Brest-Paris or PBP 2019, Galin pedaled 1,200 kilometres and completed his 15th long-distance ride and became the first Malayali
to earn the title ‘Randonneurs 5000.’

At Galin’s maiden attempt at PBP, this Paravur town resident rode with over 6,000 bikers from around the globe. “The event was held between August 18 and 22, and in a little over 86 hours, I could complete the ride. The allotted time was 90 hours, but among 1,000-odd bikers, I could complete the ride within 86 hours!” Randonnée, a French word for ramble or tour, describes a long-distance cycling event where the participants follow a prescribed route within certain time limit as checked at control points along the way.

“Riders, called randonneurs, cannot receive support, except at the designated control points. So each rider must be prepared for mechanical mishaps, changes in weather, so on. At the Paris event, I had to endure not just the distance but the weather too. I am proud of participating in the event and completing my 15th 1,000-plus-km ride in Paris, which is the Mecca of cycling sports,” says Galin.

Galin’s entry to randonneuring was accidental. Before turning a professional cyclist, Galin was a badminton player and during the course of regular competitions, he started to feel an odd sensation in both his knees. “It was the beginning of some of the darkest years of my life. I had to undergo some minor surgeries on my knees and bid adieu to my badminton career. It was heartbreaking because I had to stop it and take an eight-year-long break from any sport. That was a hard blow to my dreams, but cycling brought me back
to life.”

A few years after he started riding bikes, Galin joined the Paravur Bikers Club, which is a member of Audax India Randonneurs, one of the official randonneuring associations in India affiliated to Audax Club Parisien, and started participating in long-distance cycling, starting with less than 100-kilometre rides. He now holds the rare record of completing four brevets — 200 km, 300 km, and 400 km — twice in one season, all within the stipulated time. He has also completed five Super Series in one season and is one of the very few riders to do so in the country.  He also holds a record of three 1,000-plus rides in single-season and among those rides were the Indo-Nepal Trance and the Delhi-Jammu-Dalhousie, both 1,400-km-long.

One of the senior riders from Kerala, Galin believes in sharing his knowledge and experience in cycling with budding riders. Headed by him, seven riders from Kerala made headlines last year when they successfully completed a 1,400-km race organised by Noida Randonneurs. “In long-distance races, the racecourse can be difficult as the participants have to ride through different terrains and it could be as challenging as any other adventure sports. We were supposed to start our ride from Noida and cross Haryana, Punjab and Jammu to reach Dalhousie in Himachal Pradesh, and ride all the way back to Greater Noida. We knew that the race would be hard. This ride is quite demanding because of the distance, time and altitude.”

Galin says the emergence of bikers clubs has helped popularise the sport. He believes that group cycling and cycling clubs can improve one’s cycling skills. “Cycling on your own is great, but being part of a cycling club is the best way to go riding.”

Galin affirms that randonneuring has brought so many changes in his life. Primarily it shaped up the winner in him — both as a cyclist and as a person. “Since it turned into my passion, I could see a lot of difference in my personality. The endurance I gained through these years developed me mentally too. I believe that cycling has therapeutic qualities like inherent mindfulness. Focusing on the physical and engaging mind and body purely on riding takes us away from negative, swirling thoughts, which can have troubling effects if we obsess over them. I used to drink and smoke until the day I started long-distance rides. And it won’t help you with a good earning until you prove yourself by completing some brevets. It takes time but it is worth it,” he says.

Galin is now preparing to achieve a tandem cycle super randonneur with his friend Lorraine D'Costa, which, if completed, would make them the first Indian mixed pair to do so.