A California police officer responding to an emergency call of a homeless pregnant woman has adopted her newborn daughter. 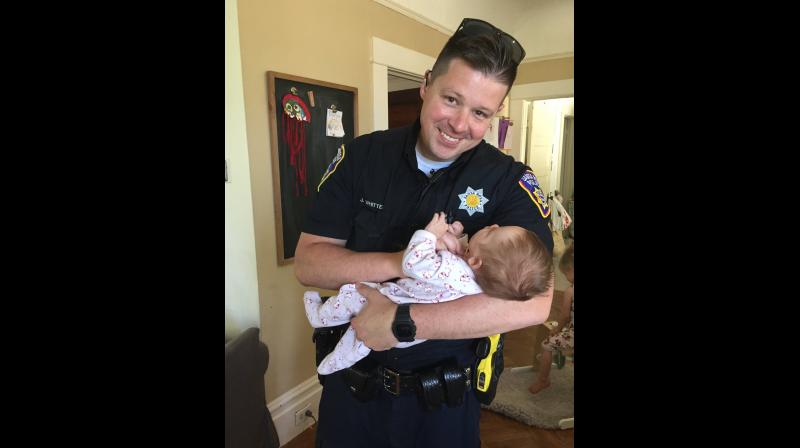 Since being posted on September 1, the post has garnered four thousand likes and over 500 shares. (Facebook Screengrab/ Santa Rosa Police)

A California police officer responding to an emergency call of a homeless pregnant woman has adopted her newborn daughter.

According to a report in CBS Francisco, the officer, Jesse Whitten, from the Santa Rosa Police Department, could never have imagined what impact a chance meeting with 6-month-old Harlow's mum would have on his life.

Taking to Facebook, the Sanat Rosa Police department posted a photo of Officer Whitten with the baby and wrote, "Not long ago, while Ofc. Whitten was working he met a pregnant woman needing help. She didn't ask for assistance the way a typical call for service goes, she was looking for a home and a family for her unborn baby. Ofc. Whitten, the proud father of three girls already, opened his heart and his home to this baby. And now it's official! After a moving adoption hearing, she is a part of Ofc. Whitten's family. Congratulations, Whitten family, and welcome, baby, to the SRPD family!"

Since being posted on September 1, the post has garnered four thousand likes and over 500 shares.

It turns out that Office Whitten's wife Ashley had a lengthy chat with the homeless woman in August last year on motherhood and its challenges.

Then suddenly, while they were at a Valentine's Dya party, the Whittens got a call that would change their lives. The birth mother specifically asked for Ashley and Jesse to adopt her child.

Harlow who was exposed to drugs in the womb and overcame obstacles in the first few weeks of life is doing much better now.

Since being posted on social media, people have written in to congratulate Officer Whitten and thank him for his big heart and magnanimity.

One user, Cathy Bucci wrote, "What a wonderful blessing on both parts."

Geri Simons said, "Congartulations and thanks for your service and sacrifices."