So, whose fault was it anyway?

As the city begins to function once again after the Tuesday floods that disrupted daily life, the finger-pointing has begun. 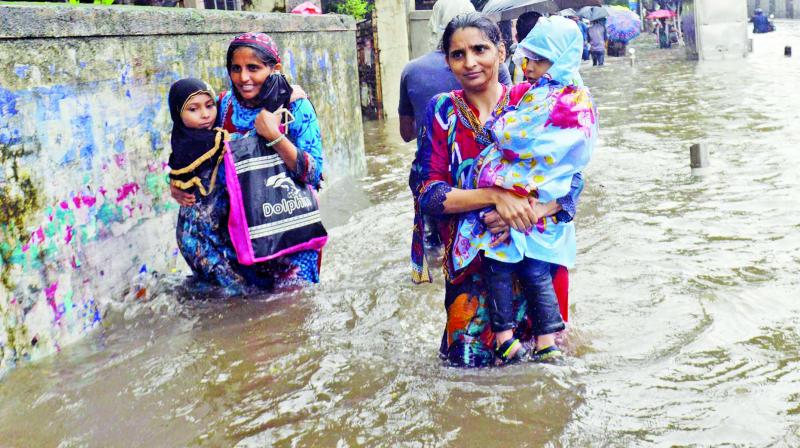 The very “spirit of Mumbai” which takes pride in being able to pick up and dust off any disaster and move forward, may be what is causing the city to stagnate in terms of progress.

The streets of Mumbai are dry once again, only the odd pothole breeds mosquitoes and dirty water, unheeded. Few would be able to tell that less than a week ago, large chunks of the city were underwater for the better part of 24 hours. While tales of bravery and humanity have been making the rounds, one major point that is being glossed over — more than a decade after the 2005 floods, the city is still not equipped to deal with the torrential rains that every other monsoon brings with it.

The very “spirit of Mumbai” which takes pride in being able to pick up and dust off any disaster and move forward, may be what is causing the city to stagnate in terms of progress.

Columnist Aakar Patel says that progress is difficult in a city which only takes pride in survival while doing nothing to better the situation. “The spirit of Mumbai is just something that takes pride in being able to go to work the day after a calamity. It’s not even that these people opened up the railway lines by which they will reach their offices; they are simply proud of age-old infrastructure. If that’s all that the spirit of the city stands for, then it is a very selfish spirit. After all what have we learned from the blasts or the floods that have killed thousands of people? Just being able to pick up and move on is not enough,” he says.

A by-product of the fact that so much focus is placed on the indomitable sprit of the city is that the real problems are overlooked in the process. “It’s obviously a great thing that people go out of their way to help one another in times of need during a calamity. However, that doesn’t negate the fact that the city was brought to a standstill to start with,” says stand-up comic Dwijal Mehta. “When stand-up comics and RJs speak up, as they have been doing these past few months, the reaction is to support their cause online and retweet it a few hundred times. But there is no tangible result in terms of improvement of infrastructure. Though it is essential to start a conversation about issues, it needs to go beyond that.”

Stand-up comic Sorabh Pant says that he only needs to look at the lane next to his house for an instance of mismanagement and infrastructural problems. “The lane next to my house was dug up through two months of summer and whenever I would ask the workers what they were doing, they would say that they were putting in a better drainage system for the rains. This Tuesday, I couldn’t walk through the lane because it was completely flooded. So, what was happening for two months then? There is obviously something very wrong,” he shakes his head.

Aakar believes that one very essential problem is a lack of liability. “Ours is a democracy, which functions on identity, not accountability. So politicians have no fear that they will be held accountable for their actions, or lack of actions. Another problem is that, even if there was a concerted effort to improve the situation, there are only so much of the country’s resources that can be poured into one city. Mumbai’s infrastructural growth happened in the late 19th and early 20th century when the suburban railways were being built. Since then, superior architecture has been absent in the city,” he laments.

It is not just a lack of accountability but a tendency to react aggressively in the face of criticism that creates a hindrance to progress. Sorabh points to the recent rigmarole that RJ Malishka had to go through when she posted a music video criticising the potholes in the city. “The reaction to criticism shouldn’t be to go and attack the critic. You should ensure that you shut them up by rectifying your mistakes, so that they cannot say anything. Unfortunately, that’s not the case in Mumbai,” he sighs.