Their tale is very unique. 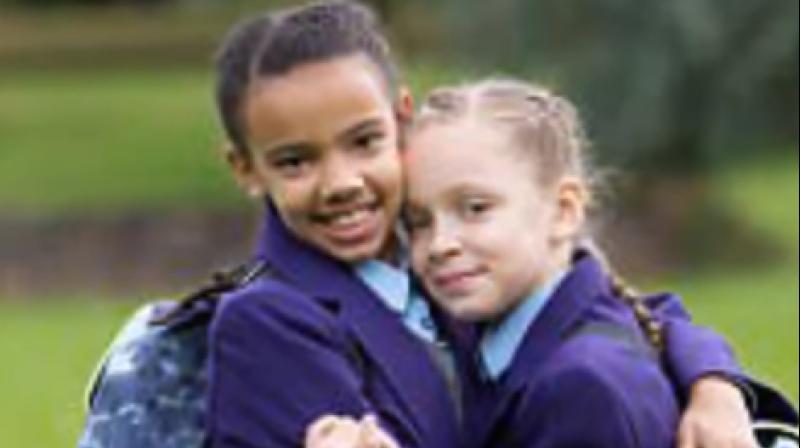 Twins Marcia and Millie Biggs looked identical when they were born in 2006.

However, soon their astonishing differences started to take shape. Millie took on a darker complexion with dark curly hair like their father Michael who is originally from Jamaica. While, Marcia’s skin became lighter and grew curly blonde hair like their mother Amanda.

Teachers and strangers are always baffled to learn these two young girls are related. 46-year-old Amanda even had to warn the secondary school they will be attending, that the girls are in fact twins.

Facts about the chance of this occurring:

* The chance is a million to one for a mixed race couple to have twins with a different colour.
* Seven various genes work together to determine an individual's skin colour.
* The egg of a mixed race woman will often contain genes coding for white and black skin.
* A mixed race man's sperm will also carry a variety of different genes.

When these eggs and sperm combine, they create a mixed race baby. However, very rarely the egg or sperm may contain genes coding for only one skin colour, the report reveals. If they both contain only white, then the baby's skin will be white. The odds for either scenario for a mixed-race couple are 100 to one. However, both situations can occur if the woman conceives non-identical twins.

This means two eggs are fertilised by two different sperm at the same time, also a 100 to one chance. Two babies of different colours are born when a sperm that contains all-white genes fuses with a similar egg and a separate sperm of black-genes fuses with a matching egg. The odds of this ever happening are a million to one.

The shock from people to learn that they are twins gets "irritating sometimes" for their mother, "but then I remember how beautiful they are and how lucky I am to have them, and the irritation goes away," Amanda told the Daily Mail.

Aside from their skin colour, the twins are very alike. "Other than the differences in skin tone, they look almost exactly the same.. They are both absolutely beautiful, and they make me proud everyday" Amanda. Adding, "They do absolutely everything together, and they're always making videos of themselves singing and dancing together."