Finding love against all odds

A city-based gay couple has taken the Internet by storm with their adorable story and charming photoshoot. 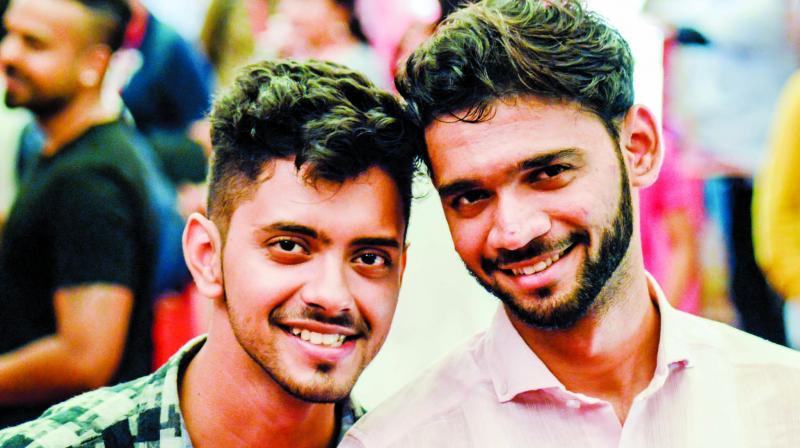 One glance at their pictures and you will know they are head over heels in love much like every other couple. And you will notice this only if you have an unbiased eye to look at love beyond the barriers of gender. Mumbai lads Ankit and Debendra recently set couple goals for millennials in the city when their cutesy couple photos shot by an online wedding platform gained traction online. The duo came together against all odds and shared their story about battling homophobia and judging eyes against the backdrop of city’s Bandra fort.

Twenty-six-year-old Debendra first met 24-year-old Ankit at a coworking space in March this year. What followed was a series of dates over some music, pasta, and wine. The relationship, which seems hunky dory today, has had its share of rough patches too. Battling homophobia and coming out to their parents was a gruelling task for these youngsters.

Shares Debendra who came out to his parents two years ago. “I was closeted because I was scared of the reactions. Once I was financially independent and moved out to live on my own I decided to tell my parents about it. Though my father is yet to comprehend, the rest of the family has been very supportive,” he adds.

For Ankit, it’s only been two months since he came out to his friends and family. From acting ‘straight’ to avoid catcalls or being judged, to finally revealing his true sexual orientation it was a tough choice for him. “I come from a conservative Maharashtrian family and the experience was emotionally challenging. There was a lot of drama, crying and an outburst of emotions but I hope eventually they’ll come to terms with it,” he sighs.

Debendra was teased for being effeminate, throughout his childhood. He finally accepted his identity at 21 years of age and it took him over four years to tell the world that he is gay. “As a kid I was bullied, abused and teased. I did not want the same thing to be repeated as an adult and hence I chose to ‘act’ straight even though I was not,” Deb says. In Ankit’s case people refused to believe that someone as masculine like him can be gay. “People refused to believe that I’m gay. From being surprised, shocked to being extremely supportive, I’ve faced some mixed reactions,” he says.

The couple wasn’t apprehensive during the photo shoot, for them it was just a recreation of a regular day in their lives. “We weren’t nervous, because it was Bandra. If it were any other locality we would’ve been careful. We were holding hands, kissing, hugging and everything was just fine. It was an early morning shoot and people were cheering for us,” Debendra shares.

While they agree that Mumbai has been a very LGBT friendly, they don’t intend to stay here for the rest of their lives, “While I’m privileged that I’m not born in the

middle-east, or being lynched for being homosexual, the laws in this country are archaic and are not friendly towards the community,” says Debendra. “Since we are both from a marketing background, we will study abroad and settle there, we will wait for two more years and save up because we don’t wish to trouble our parents with the finances. Yes, I like a guy, and I want to live my life with him.” says a hopeful Ankit.